Inkplate 6 is an ESP32 powered wireless e-Paper Display based on a recycled  Kindle E-reader display, and that e-Radionica launched in December 2019 via a crowdfunding campaign.

The company says backers were “happy about the versatility and simplicity of the display” but wished for a larger display, a faster refresh rate, and extra features. This gave birth to an upgraded version: Inkplate 10. The new ESP32 wireless display comes with a recycled 9.7-inch display with 1200 x 825 resolution, up to 38% faster refresh rates, as well as extra GPIO pins, an RTC clock, a USB Type-C port, and lower power consumption. 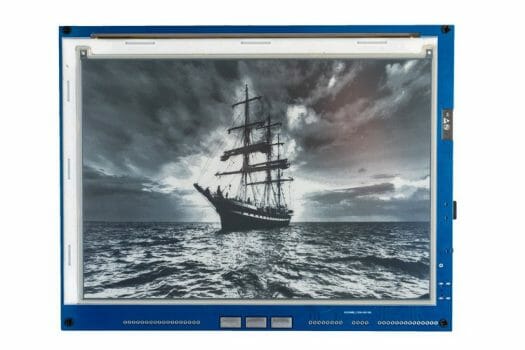 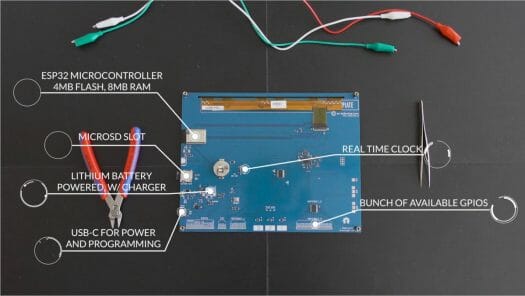 The company provides Arduino libraries compatible with Adafruit GFX as well as a MicroPython module for the display, and an ESP-IDF driver is also in the works. There are also online tools with an image converter and GUI designer to help people create content compatible with the display. You’ll find all those and (soon) hardware design files on Github.

Inkplate 10 also supports Peripheral Mode which allows you to control the display from another board such as Raspberry Pi or Arduino via commands sent over a UART or USB connection. 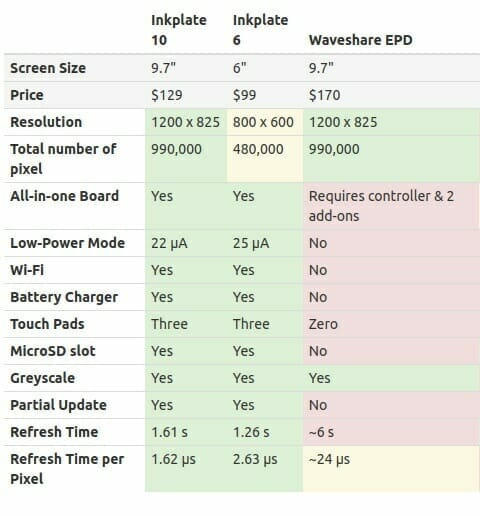 The comparison table above – provided by e-Radionica – shows much faster refresh rates compared to a Waveshare e-Paper display with the same dimensions and resolution, plus some extra features like WiFi connectivity and a MicroSD slot for storage.

Just like its predecessor, Inkplate 10 has been launched on Crowd Supply. A $129 pledge is asked for the display, or $169 with a 3D printed enclosure. Shipping adds $10 to the US, and $18 to the rest of the world. Shipping is expected to start at the end of April.

I know almost nothing about these e-Ink/e-Paper displays. I have two questions: [Q1] Why does it take 1.62us/pixel * (1200 * 825 pixels) = 1.60 seconds per screen refresh? The way I understand it each pixel is a ball (or similar) with two sides, one black and one white. The balls live in an X-Y matrix and are flipped electrostatically. So why are the pixels being flipped one at a time? Let’s say you have a display in portrait orientation, there are lots more pixels in the rows, so given a row-oriented frame buffer, just load each row and update… Read more »

Having dissected how the controller chips work for e-paper displays gives me a little confidence in this answer. The reason for the row by row pixel update is mostly power consumption and the fact that the controller chips act like giant multiplexers redistributing the high voltage. There is no reason why it shouldn’t be possible to update more pixels simultaneously but do keep in mind that individual pixels just take a while to update because the microdots have to physically migrate. That is mostly what makes them so slow as opposed to lcd technology where crystal orientation gets changed. Faster… Read more »