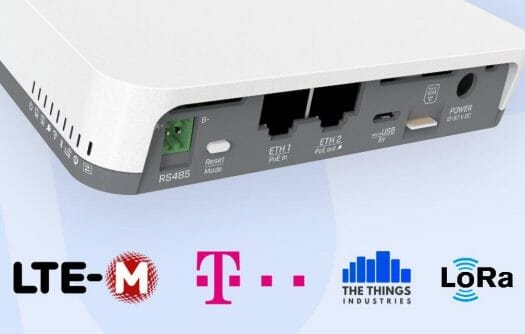 I’d normally view LoRaWAN and LTE IoT standards such as NB-IoT or LTE Cat-M (aka LTE-M or eMTC) as competitors, but The Things Industries and Deutsche Telekom​ partnered to launch an IoT gateway with both LTE-M and LoRaWAN capabilities together with associated services.

We do not have much information about the hardware, but it is a LoRaWAN gateway designed by MikroTik that connects to an LTE-M backhaul and to The Things Industries’ device and data platform. If the picture above does indeed represent the actual gateway it should also be equipped with two PoE capable Ethernet ports, and an RS485 terminal block, plus a USB port and a SIM card slot. 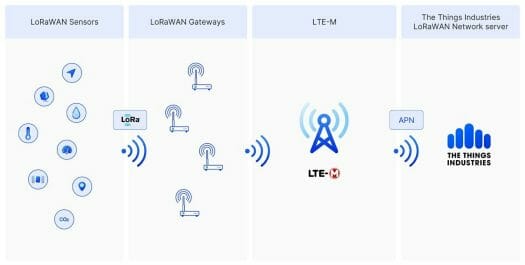 The solution would mostly be used for smart buildings at first taking advantage of the superior signal penetration of LTE-M. Sensors would send data to the LoRaWAN gateway which then, would forward it to the cloud over LTE-M.

This type of solution could also be achieved through traditional LTE cellular connectivity, but LTE-M reduces costs because of more affordable hardware and lower usage costs. Deniss Truhanovs, Head of Innovation at Mikrotik, says the LoRaWAN to LTE-M IoT gateway will sell for $209 (list price), and optionally supports LoRa 2.4GHz with even lower pricing for global deployments.

The solution will first become available in Germany and the Netherlands with an ​ Early Access offer​ soon to be launched with LTE-M backhaul for solution providers and system integrators. You can register your interest here.

Honestly, that concept makes sense. Why aren’t there any other companies doing this? The one missing piece there: Bluetooth LE. So that you can create a 6LoWPAN network as well with higher throughput.

I think there may be Bluetooth too, as it is mentioned in the video.

I was told by the Telekom they do not plan to expand their LTE-M beyond the EU countries this year but they have different tarrifs with wordwide coverage, just not LTE-M:

I got this info from 1nce.com in regard to roaming:
There seem to be a few countries, USA, China, Turkey who have a limited roaming agreement meaning stationary devices require a sim card switch within a few months. it just has to be switched out.
Apparently the USA are getting rid of this restriction this year.