Conrad Barski (Lisperati) wanted a portable “workstation” to write in Lisp and see all those parentheses. Since there aren’t many devices with an ultra-wide display, he decided to build his own “Lisperati1000” ultra-compact Lisp programming workstation powered by a Raspberry Pi Zero W, and equipped with an ultra-wide 1920×480 8.8-inch display, a compact keyboard made of Cherry Brown switches, and a 4,400mAh dual battery all housed in a 3D printed enclosure. 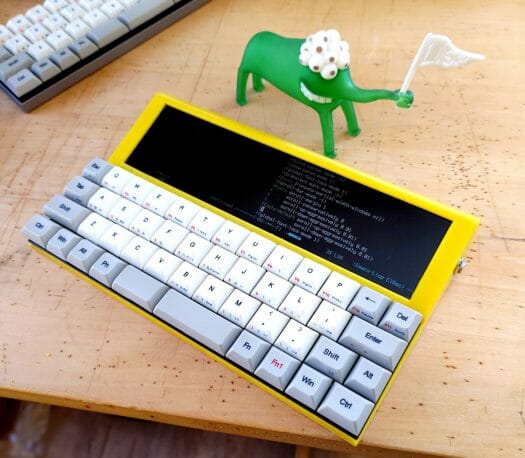 When Conrad first showcased his little handheld computer on Twitter, he first claimed only 3 will ever be built, but think quickly got out of control with the project being featured on Hacker News, and he changed his mind after seeing the popularity of the DIY computer.

UPDATE: Due to high demand, I have decided to fund a project to release this as a kit. If you are an electrical engineer and/or know about machining Aluminum, please get in touch!

The launch is planned for the end of February, and it will be released as a kit, meaning some soldering and 3D printing will still be required if you plan to build your own. You’ll also need to purchase off-the-shelf parts by yourself including the Raspberry Pi Zero W SBC and an 8.8-inch display on Aliexpress for $65 to $85 with an HDMI converter board/

Oh someone has been reinventing older designs from history again. The Cambridge Z88 ( Z80 based ) a design which came from a portage ZX Spectrum design work.

looks cool, but i don’t c anybody do coding on such a small keyboard without a mouse

bah, learn vim/emacs kid. you will learn to survive without the mouse and become faster in the process

Fun to read “coding” and “mouse” in the same sentence. Usually the mouse is the thing you catch when you want to have a break in your coding session and do slower, low brain demanding stuff like web browsing.

small keyboard? … this dude has never seen the olkb planck or gherkin keyboard 🙂

It is as crazy as that elephant… thing… next to it