SRKH Designs’ microZERO is a tiny, Arduino compatible module based on Microchip SAMD21 Arm Cortex-M0+ microcontroller for applications such as drone control, mobile platforms such as cars, trucks, boats and bikes, and other products working in demanding environments.

The company has also designed two baseboards, namely Dev Board A with RGB color high resolution IPS display and the more classic Dev Board B, both mostly following Arduino UNO form factor to get started with development and/or evaluation. 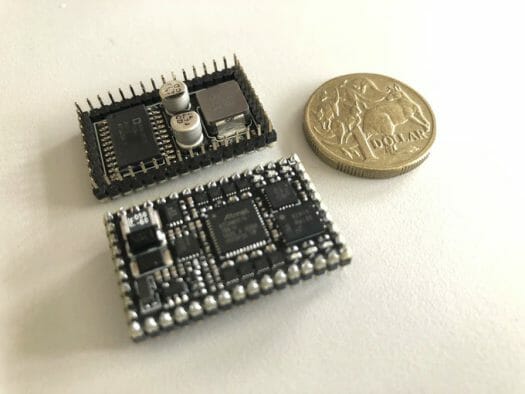 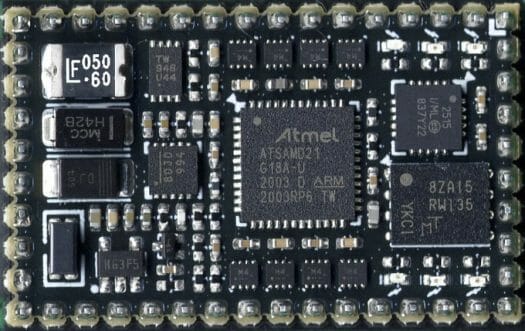 The module is not only compatible with the Arduino IDE, but also Microchip/Atmel Studio 7 and Zephyr real-time operating system. The documentation and bootloader are currently finalized and everything will be published/released in March.

As mentioned in the introduction, the company will also provide two development kits with microZERO DevBoard A and B with most of the same specifications, except for a small display:

The project has launched on Kickstarter with a 5,000 AUD target (or just under $3,900 US). I’ll use US dollars going forward. Rewards start at $54 for the module only, while the fully assembled Dev Board A goes for $77, and Dev Board B for $93. It looks like a nice project, but the campaign is not very successful so far, as pricing will turn off many people. That’s without shipping which $7.75 to Australia, and $23.25 to the rest of the world. Backers should expect their rewards to ship by May 2021 if the campaign is successful.

Not sure I’d call it “micro” when compared to seeeduino xiao.

The price certainly isn’t micro either, i also don’t like 2mm pitch, its a hassle

It’s pretty dense and featureful but as said, 2mm pitch is a hassle. However I like the arduino-like board integrating the display.

I’m still looking for an arduino nano-compatible board using a SAMD21 or maybe ESP32 or STM32. Most such boards use different pinouts and I cannot use them as a drop-in replacement to upgrade my laser engraver’s GRBL controller without having to change the baseboard. This completely defeats the purpose of using standardized modules :-/ I even started to think about trying to make my own but I have more useful things to do of my time.

Text says Microchip but board image shows an Atmel?

Microchip bought Atmel. It’s possible there’s still stock of ICs with the old Atmel branding, or they just did not bother changing the markings on the chip.