I missed that linux.conf.au 2021 took place on January 23-25 2021, and while browsing the schedule I noticed a talk entitled “Building Raspberry Pi Supercomputers” by Federico Lucifredi, Product Management Director for Ceph Storage at Red Hat.

In the talk, he mostly focuses on the software part, and besides some basic steps, I learned about some new commands that be useful to people managing clusters of Raspberry Pi or other Linux boards or hosts.

He used Picocluster image in his example, but for people wanting to use 64-bit OS, he recommends Ubuntu or Fedora images until Raspberry Pi OS 64-bit becomes stable. The first part of the configuration is making sure all the main user is the same on all board, disable SSH for root, and configure run levels (X not needed on clusters). Networking is configured with fixed IP addresses for Ethernet, and DHCP for WiFi.

He also configured ssh without password (i.e. public/private keys), but using ssh-copy-id command to enable the keys on all boards, as well as NTP with timedatectl command, and an NFS share on the master node to share data.

Some of the useful commands from the Picocluster image include: 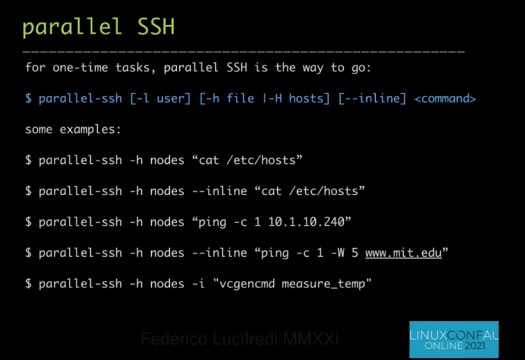 But the command that interested me the most from the talk was parallel-ssh which can be installed on the master node as follows:

The manpage describes pssh as “a program for executing ssh in parallel on a number of hosts. It provides features such as sending input to all of the processes, passing a password to ssh, saving output to files, and timing out”.

The nodes file contains the list of host in the following format:

I tried it with two Linodes I own and already configured with private/public keys:

It just returns whether the command worked without output from the command. If we can output we need to add inline:

The third command just checks which hosts are alive with a ping command to the master host IP address in Federico’s cluster configuration:

The fourth command is also using ping but this time to test DNS connectivity wih output from the command on each other:

We can also check the ping time, and it’s easy to find out which host is based in the US and which one in Europe.

The last command from the slide is specific to Raspberry Pi, and used to check whether it’s possible to read the temperature (without actually returning it), so I’ll skip it.

I can see many really useful use case for parallel-ssh. For example, if you had to install a program on multiple boards, you’d only need to type the command once, and the output would show where the installation was successful, and potentially where it failed.

You can see the full talk in the video above,  as well as the slides that also include examples about the Message Passing Interface (MPI) open library standard for distributed memory parallelization, but it was quickly skipped in the video due to time constraints.

I also find cssh (https://linux.die.net/man/1/cssh) very useful. Especially when you have to run a similar (but not identical) sequence of commands on a number of machines.

Interesting Article! Can’t wait to try some of this. And I’m not Wendy, browser auto filled that (facepalm)

Ugh, don’t bother with parallel-ssh. Ansible has replaced it completely, will do the same things you want there along with a whole lot more you can get it to do as you need it.

You seem to be confusing administration and automation. But you’re not the only one, it’s frequent.