Microchip / Atmel SAMD21 Arm Cortex-M0+ microcontroller has been around for several years, and we covered various boards based on the MCU include the official Arduino Zero launched in 2014, Arduino Tian, and the tiny SAM 15×15 or Exen Proto boards among others.

Another SAMD21 development board has now shown up on Electrodragon website: SAMD21 Mini Development Board sold for $14.50 on the website, but you’ll also find it, under the RobotDyn or Wemos brand on Aliexpress for $7.05 and up. 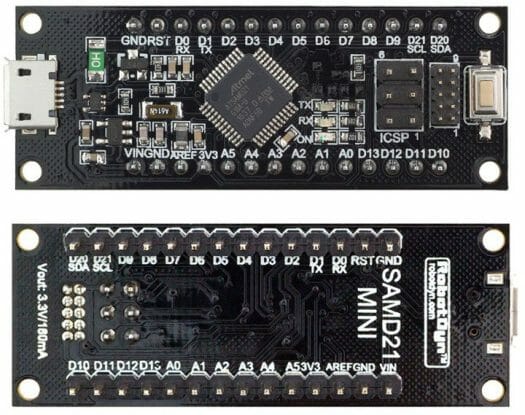 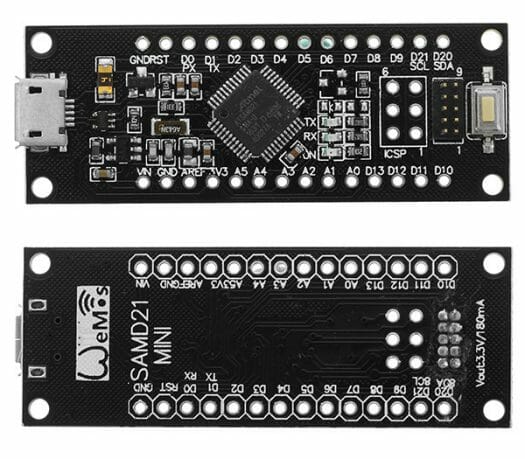 Both Wemos D1 SAMD21 M0 Mini and RobotDyn SAMD21 Mini boards appear to be identical except for the branding on the bottom of the board. There’s not an awful lot of documentation made available from any of the sellers but luckily, BLavery tested the board late last year and documented his experience with Arduino and CircuitPython on Github.

Regarding the Robotdyn and Wemos boards you have mentioned, there are some minor points to take into account. I am currently using both the Wemos and the Robotdyn versions of the board and the choice of which module I order is primarily determined by delivery time. One the boards I have received, there are a few differences, the voltage regulators used are different between two with the Robotdyn units having both a higher current rating and a lower quiescent current. Neither module is capable of supplying any where near the 800mA shown in the specification section. Having said that, in… Read more »

Mine is labelled HW-799 and Arduino IDE recognizes device ATSAMD21G18A

First Arduino IDE host machine could not upload via USB. 2nd no problem.