Microsoft announced Windows 11 with new system requirements that include having hardware with a TPM 2.0 chip. Yesterday, we noted that could be an issue, as not all computers, laptops, and tablets may come with a Trusted Platform Module (TPM), especially if version 2.0 is required.

Microsoft explains it’s for a good reason, name improved security, but the requirement has already had an impact on the market, even though Windows 11 is not officially available just yet, as TPM 2.0 modules have quadrupled in price according to a Tweet from Shen Ye, senior director, global head of hardware products for HTC. 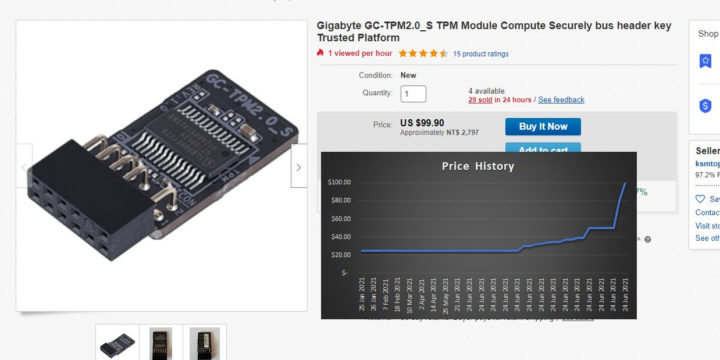 Note that while the bottom scale shows dates, it only shows dates when the price changes and the price was indeed $24.90 before Microsoft’s announcement, and gradually went up to $99.90 within 12 hours. At the time of writing, that module is out of stock on Amazon.

Shen further notes that most desktop motherboards support TPM only as a purchasable accessory, so that explains it. If your system does not come with a TPM, or it’s not enabled in the BIOS (see further below), Windows 11 will refuse to install. 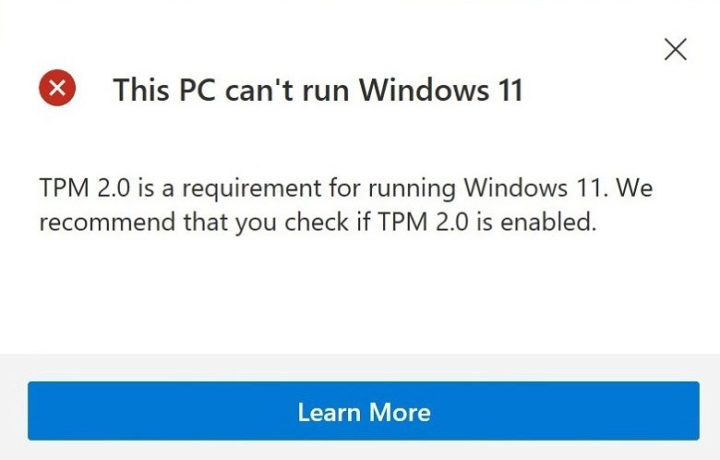 And it does not matter how powerful your system is. If Microsoft says “your system does not meet the minimum requirements”, despite your system featuring an Intel Core i9 with 64GB RAM, and NVIDIA graphics, the lack of TPM support is most probably the culprit. 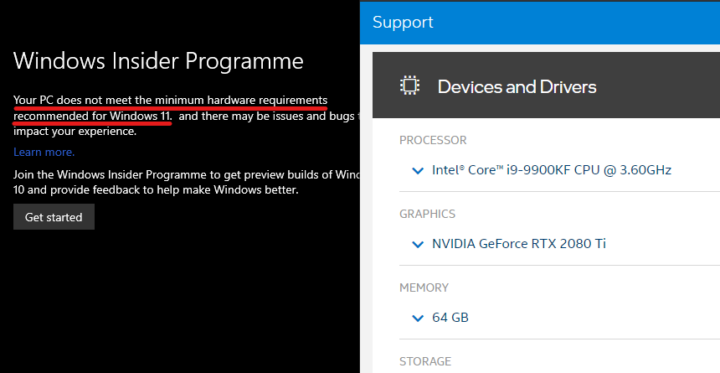 But that does not necessarily mean your system lacks a TPM, and instead, it could just be disabled in the BIOS. David Westen, Microsoft director of OS security, explains:

Almost every CPU in the last 5-7 years has a TPM. For Intel its called the “Intel PTT” which you set to enabled. For AMD it would be “AMD PSP fTPM”. TPMs have been required for OEM certification since at least 2015 and was announced in 2013.

The good news is that you may not need to purchase a TPM 2.0 module, and just enable the settings in the BIOS. That’s provided you don’t have a crippled BIOS… My ACER laptop currently running Ubuntu 20.04 on AMD Ryzen 7 2700U does not seem to have a TPM or it’s not enabled (based on “dmesg | grep -i tpm” output), and unsurprisingly, it has no such “fTPM” option in the minimal BIOS provided by ACER.

Some reports TPM 2.0 is a “soft requirement”, and the hard requirements will be TPM 1.2. But I could not find an official statement from Microsoft website, with the only info on Microsoft Answers about TPM 1.2 support being:

Win 11 is still in ongoing development and months away yet so wait and see when it’s officially released.

So let’s wait and see…

There are multiple types of TPM modules and some may be very mobo specific. They were hard to find before the Win11 announcement. I had to get the one for my mobo from some guy in Estonia lol. I took a chance and it worked!

The TPM feature built into processors isn’t called TPM, in the BIOS it’s called PTT in Intel boards and in AMD it’s fTPM.

I sure as heck don’t…
From the preview screenshots it seems like they are trying to become Mac OS. Embrace the angularity! I don’t want my icons in the center of the taskbar!
I’ll just stick to Win10 for games and Linux for everything else.

That is the only available path. I feel sad for the people wanting to use the new microsoft garbage np matter what just for the sake it’s newer or they think it will be better 🙁

Everybody just move to linux already, it will be better for the environment not having to rely upon microsoft to suddely render most pcs cpu’s before 2017 unsupported after 2025.

Imagine the amount of ewaste after 2025 for which we hope regulators will make microft responsible.

I hope that people will run Windows only in a Linux VM with an emulated TPM, instead of forcing everyone to have a TPM spy in their computer. At least ARM and RISC-V plaforms will not have it.

A TPM is a purely passive module, so it can’t spy on anything. And you can perfectly use a TPM with Arm and RISC-V, e.g. for disk encryption or for protection of high valued IoT devices, e.g. this one: https://letstrust.de/
And there are quite some security functions in the Linux Kernel that also require on a TPM.

As long as Microsoft treats Arm seriously and adds its own spin on Apple’s Rosetta 2, they could end up shipping on many millions of Arm devices. Even if they all use Qualcomm SoCs.

Intel will license SiFive’s RISC-V cores, so maybe Windows 11 could end up on there in the future.

I think that with this requirement (even the TPM1.2), Microsoft will give a big help to Ubuntu and similar. Many people needing a more modern OS will pass to Ubuntu Desktop.

The new shinny 11th version of “fenêtres de Micromou” is at best six months away, then if you are a responsible user, you will want to wait at least six more months and let the “Beta testers” users experiencing the failings of the first production release. This means you have at least one year before having to care about a TPM on your machine. In the meantime, you can enjoy popcorn reading the articles and comments (part of it is also known as BS), already quite entertaining. Oh my. After decades of using Linux / BSD on servers, I also… Read more »

The mandatory TPM requirement means that customers can now be “banned from Windows”.

And contrary to a natural belief, living without windows does not imply you live in the dark 🙂

am not keen on being forced into using TPM – it should be an end users choice, not only that they are obsoleting some older but faster processors over newer but greatly slower ones – history repeats itself again but in the past there were good reasons to obsolete hardware – but now its a money spinner – chucking perfectly good hardware into landfill which in these times of environmental and climate concern is not a very green move by M$

Agreed. Given that it’s very hard to observe any difference between CPU cores starting from Skylake and above, there’s no real understandable justification here.