Google Coral is a family of development boards, modules, M.2/mPCIe cards, and USB sticks with support with local AI, aka on-device or offline AI, based on Google Edge TPU. The company has just published some updates with one important firmware update, a manufacturing demo for worker safety & visual inspection, and the ability to use the Coral USB accelerator in Chrome.

If you own the original Coral development board or system-on-module based on NXP i.MX 8M processor, you may want to update your Mendel Linux installation with:

The update includes a patch from NXP with a critical fix to part of the SoC power configuration. Without this patch, the SoC might overstress and the lifetime of your board could be reduced.

Note this only affects NXP-based boards, so other Coral products such as Coral Dev Mini powered by Mediatek MT8167S processor are not affected. It’s unclear if the patch is only for the Debian-based Mendel Linux distributions, or whether it also impacts other NXP hardware platforms.

Since the demo requires OpenGL it is mainly designed for x86 systems found in many manufacturing gateways, but Arm Cortex-A systems like Coral Dev Boards are also supported. 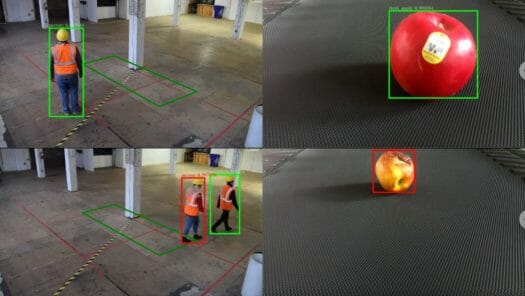 You’ll find the source code and instructions on Github.

If you’re not a fan of typing command lines in the terminal, Google has added support for Coral USB Accelerator in Chrome through WebUSB. It works on Linux and macOS only for now. You’d still need to type some commands to setup the web server, and in Linux, to configure device rules, but once it’s done you can simply access http://localhost:8000 in Chrome to flash the firmware to the USB accelerator, and play around with a few models like SSD MobileNet v2 using your own images. 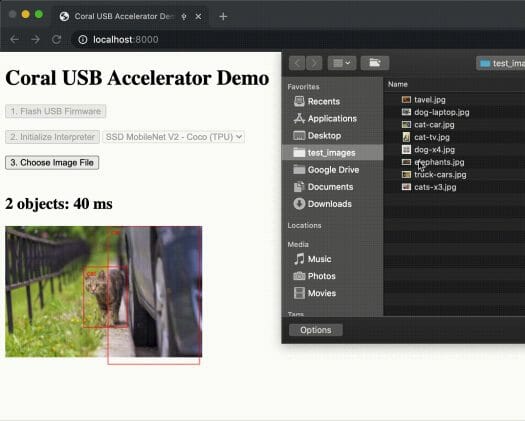 To play around with WebCoral, check out the source code of the demo.

More resources to get started with Coral

Google also released a few more resources to help people get started with Coral, notably a new repository for models, which reminds me of the OpenCV’s ModelPlace.ai introduced about two weeks ago, as well as a bunch of tutorials to perform transfer learning, i.e. retrain models to match your application’s requirements, using Google Colab.