Pimoroni Pico Wireless Pack is an add-on board for Raspberry Pi Pico adding a MicroSD card socket and ESP32 WiFi & Bluetooth module to the popular MCU board.

While it’s a nice idea to add wireless connectivity to Raspberry Pi Pico, ESP32 is a dual-core Xtensa LX6 processor clocked at 160 to 240 MHz with WiFi, Bluetooth, and plenty of I/Os that should be able to handle most tasks better than Raspberry Pi RP2040 dual-core Cortex-M0+ processor clocked at 48 MHz by default, although we’ve also seen it overclocked up to 252 MHz. 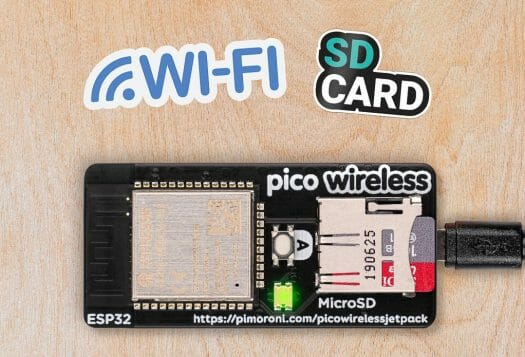 It comes with female headers that allow it to be inserted directly to the back of Raspberry Pi Pico has shown above, or into a “GPIO expander” board like the Pico Omnibus shown below through an SPI interface. 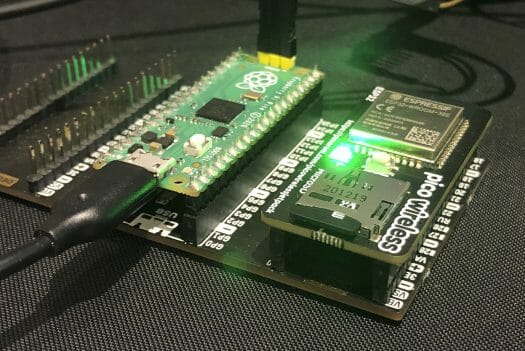 Sometimes it makes sense to have two chips, as the RP2040 Cortex-M0+ should consume less, which would be beneficial when running on battery, but the Pico board does not include battery support. So I guess the main benefit would be for people having already developed an application on Raspberry Pi Pico, and wanting to connect it to the network.

Pimoroni employee Phil Howard (aka Gadgetoid) showcased the solution on Twitter with a demo serving an HTML file from an SD card over WiFi.

Armed with a chonky @TPLINKUK access point, some borrowed code and a little glue, magic and wishes…. I’ve got Pico Wireless serving an HTML file from an SD card! pic.twitter.com/cXf4cUytmj

That does the job, but you could also just remove the Raspberry Pi Pico board to achieve the same result by powering Pico Wireless Pack with a separate 5V (or is it 3.3V) power source. The software would likely be quite similar since like RP2040, ESP32 can be programmed with the Arduino IDE or MicroPython. Note that Pimoroni provides its own MicroPython firmware. Using the C/C++ SDK for the respective processor would however lead to a fairly different source code.

You’ll find documentation on Pimoroni’s shop where you can also purchase the Pico Wireless Pack board for 12 GBP or about $16.70 US. The price is competitive against Arduino Nano RP2040 Connect, but the best value, if you want WiFi with RP2040 MCU, is probably the $12.95 Wio RP2040 Mini board at this time. In the future, it could prove more interesting to get a USB-powered “ESP32 Pico Wireless” board as well that could work independently and leverage the Raspberry Pi Pico ecosystem.

[Updated – Initially published on May 6, 2021 featuring a prototype of the board, but the post was updated on June 26,2021 with the launch of Pico Wireless Pack]

Do I need to repost an altered version of the Worthless meme here? This reminds me of the beginning of the ESP hacking era when ESP8266 ESP-01 boards were being used via UART with modem commands to add wireless abilities to arduino and other projects. It wasn’t long that people realized that the ESP8266 was a better chip than where they were attaching them to. Those projects that didn’t need the other I/O just moved onto the ESP8266 entirely. I thought we had skipped that with the ESP32 as development for those chips have been available since inception. Why are… Read more »

I totally agree with you!!! The esp32 used as MCU is at the same level of PiPico; the only better aspect on the PiPico is the state machine on the I/O side.

Wow, such a pointless board. So, people now just create Pico boards, because they think the buyers of the Pico are stupid enough to buy their boards as well?

I mean, if it works ^^ I just can’t recommend anyone buying it and using it. Very pointless 😀

I mean get it that it is good for educational purposes, and indeed the Pico is pretty easy to get into (USB programming, choice of IDEs, community support), but still…

You can also develop applications for the ESP32 with the Arduino IDE. So, I don’t see any benefit here at all.

I weep for humanity.

The moment I saw the RPi Pico was radio-less, I knew it would only be a question of time before I saw this stupid combination. Just because it can be done, doesn’t mean it should be done.

I feel like this could make some marginal amount of sense if it was an ESP8266 and you wanted to do some time critical stuff on a separate chip and then async wireless coms on another. But the ESP32 has two cores and a google search says you can run real time stuff on one core and the wifi stack on another. I don’t actually know how easy it is to code up vs communicating between two chips

Anyone have experience with that? (Honest question.. not trolling..)