But Stephen Hawes found out this type of solution did not cut it for mid-scale manufacturing (100 to 5000 units per year), so he decided to build his own. Meet Index PnP, an open-source pick-and-place machine designed for mass-production volumes typical of crowdfunding projects. 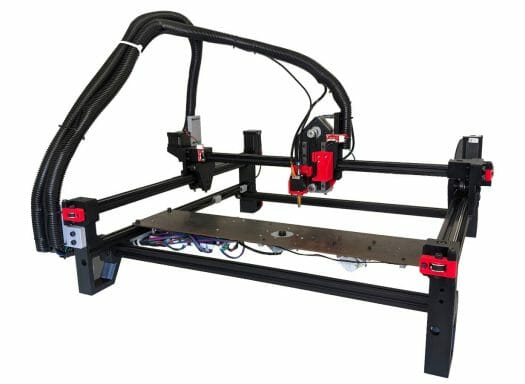 The project was introduced launched with the following requirements

Index PnP is still under development, but good progress has been made and some people have received the beta version of REV03 of the motherboard based on an STMicro STM32F407VET6microcontroller. The board runs Marlin with a couple of changes including RS-485 & ADC support, as well as “Board Config” with all the correct pin mappings. You’ll find all resources needed to be your own on Github.

Note that at this stage of development, it’s still not recommended to use the machine for production. But if you’d like what it’s like to build Index PnP, Stuart Pittaway gives it a try and documented his experience in four-part video series starting with 3D printed parts, then base frame assembly, Y gantry assembly, and the final steps of the build with the installation of the motors, belts & pulleys.