BigClown IoT Kit is designed to be as easy to use as building a castle from LEGO bricks or an IKEA cabinet. The open source kit is comprised of a coreboard module with STMicro STM32L0 Cortex M0+ micro-controller, and a sub GHZ (868/915MHz) radio for wireless communication, that accepts one or more compatible modules (currently ~30 different options), and communicate to a gateway such as Raspberry Pi or Turris Omnia where you’d connect BigClown RF USB dongle, although it’s also possible to include a Sigfox module for communication, and , LoRa & NB-IoT module appear to be planned.

That’s for the hardware…The kit then connects to your chosen gateway via MQTT, which in turns accesses cloud services such as Ubidots, Microsoft Azure IoT, AWS, IFTTT, etc… , and you can monitor the data or control the kit through a web based dashboard or your own application. 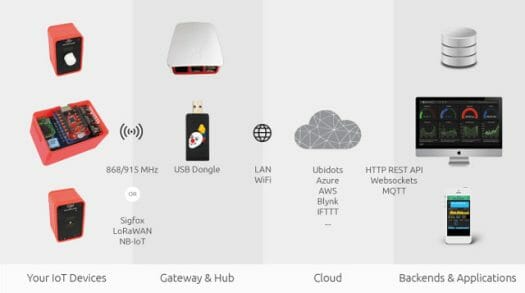 They also offer a compact version of the Core module called Cloony with the same chips, except it lacks the 3D accelerometer, and measuring only 23×23 mm for easy integration into your own board. 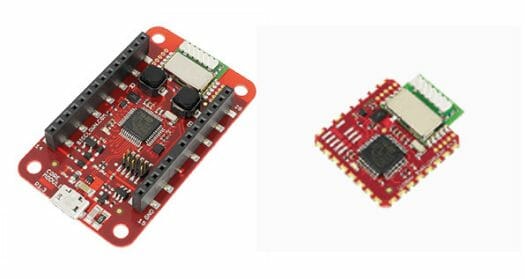 Then you can select modules & tags (smaller boards) as needed from the following list:

3D printed enclosures, and covers are also available, so fully assembled kit will look like as the ones below. 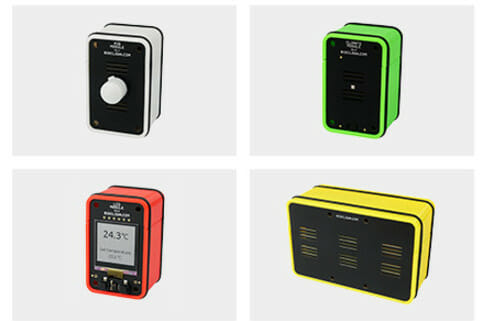 Firmware is written in C language to make sure battery-life is optimal. The company – HARDWARIO – has also release a firmware SDK to make development easier, and including an API that “feels like working in a high-level language.” The project is mostly open source with firmware, gateway software, SDK, and hardware files (PDF only) released on Github, together with the company’s website…

BigClown IoT has been launched on Indiegogo aiming to raise $30,000 from a flexible funding campaign. Perks start at $69 for the minimal kit with a core module, mini battery module, mini cover module, 3D printed enclosure, and the USB RF dongle. The link I provided should also have a “Premium Kit – Secret Deals” for $249 with 5 core modules, 5 enclosures, a suitcase, and some Ubidots credits. If you want to get all modules, then you’d have to go with the $599 Ultimate Kit including 7 core modules and enclosures, all modules and tags listed above, a suitcase, and more Ubidots & Blynk Energy credits. Shipping adds nothing to $49 depending on the selected rewards and destination country. People based in Europe won’t have to pay for extra custom duties since everything is shipped from Europe. Delivery is planed for August 2018. More details may be available on the official website.