Are you bored with keyboard news yet? Keyboardio Model 100 does not quite look like most keyboards though. It’s basically a piece of art with an enclosure made of walnut or maple hardwood, and designed as an ergonomic keyboard with left and right parts with a total of 64 mechanical switches with RGB LEDs and custom-sculpted keycaps.

Keyboardio Model 100 also runs Kaleidoscope open-source firmware programmed in the Arduino IDE, and can be customized by the user with Chrysalis open-source, cross-platform graphical configuration tool. The community is also working on porting QMK firmware to the keyboard. 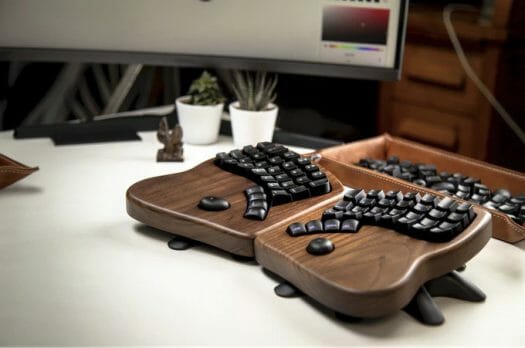 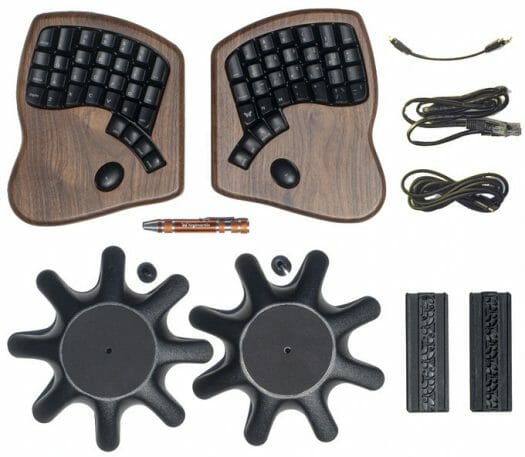 The longer one-meter interconnect cable may feel odd, but one backer from the previous model decided to belt-mount the two halves of the keyboard so a longer cable definitely helps in that case. Talking amount mounting options the bottom of the enclosure features an ISO-standard 1/4-20 camera tripod mount, so that gives a lot of options.

While 64 keys may seem like a low number of keys, Keyboardio claims the Model 100 packs the full functionality of a 104 key keyboard and more thanks to the Fn keys also called the “Palm keys”. The layout may take a while to learn, and you may notice the traditional space bar is gone, instead replaced by a space key on the right half accessible with your thumb. 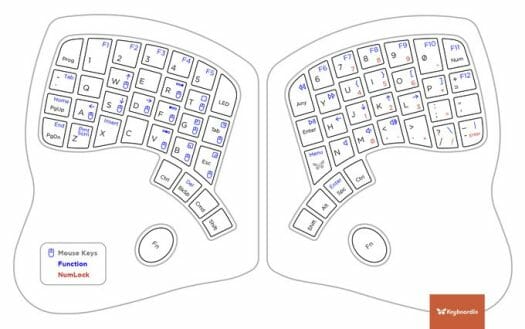 If you have left-handed you are in luck, as keycaps can be rearranged as your see fit, and besides the firmware being open-source (see Github), the company also provides a graphical user interface to re-arrange the layout and LED themes: Chrysalis. The open-source program is mainly developed in Linux (Ubuntu), but it’s also tested to make sure it works on Windows 10 and macOS Mojave. 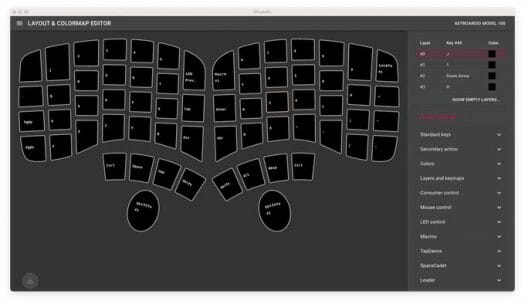 Keyboardio Model 100 keyboard has recently launched on Kickstarter and raised around  $435,000 US so far, an impressive amount of keyboard… As we’ve seen in the past high-end, customizable, mechanical keyboards are not exactly cheap, and a pledge of $289 is asked for one Model 100 keyboard. But if you want a truly unique keyboard, throwing $3,000 will allow you to get custom-engraved keycaps legends, any type of mechanical switch, and the wood of your choice. Shipping adds $20 to $75 depending on the destination country, and the keyboards should start reaching backers sometime in January 2022 or later.

I really don’t like it when keyboards abuse of combination to access “less common” keys. For example, I find myself using combinations like Ctrl-Shift-Home or Ctrl-Shift-End quite a lot to select the entire beginning or end of a document or text area before copying it or deleting it, I do that with a single hand on a regular keyboard, and here it requires two fingers of each hand to perform an acrobatic figure. Also try to switch to virtual consoles 6 to 12 using Ctrl-Alt-F6..F12! You’ll have both Alt and Fn under the same thumb, unless Fn works for any… Read more »

I made a extra lefthand keyboard for key combinations I use a lot. It uses QMK firmware and every combination is linked to 1 key. I’m also still using a cherry cymotion master where you have the extra keys on the sides. I always hoped somebody would add beter support for it under linux, so I could use the full functionality. I was even thinking to design a replacement pcb for the cymotion that runs on the QMK firmware so the cherry-K-key could be used to switch layers. But probably I’m the only one still using a cherry cymotion master… Read more »

I was reminded of the Microsoft ergonomic keyboard that seemed to be more of a gimmick but the more I read and watched, the more I was interested.

And then I saw the price ….