Allwinner D1s (aka F133) is a cost-down version of Allwinner D1 RISC-V processor introduced earlier this year together with a Linux capable development board, with the main difference being the integrated 64MB DDR2.

Besides the built-in RAM, Allwinner D1s comes with many of the same features as D1 RISC-V SoC, but loses HDMI output and the HiFi 4 audio DSP, and Allwinner made some tweaks to the IOs with one less I2S audio interface, and general-purpose ADC. 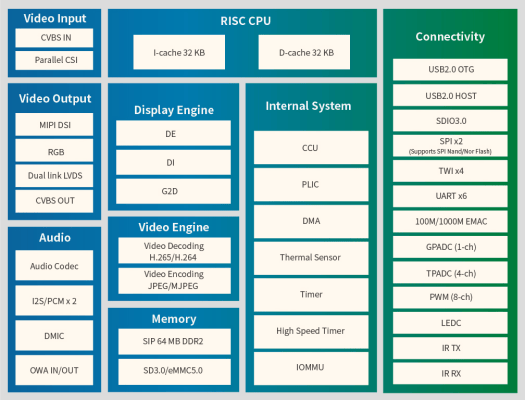 The processor page on Allwinner’s website does not mention RISC-V at all, only RISC, but I found about the processor via the MangoPi team who teased us with the upcoming MangoPi-MQ1 SBC based on Allwinner F133-A processor, so I can confirm it’s indeed a RISC-V processor. 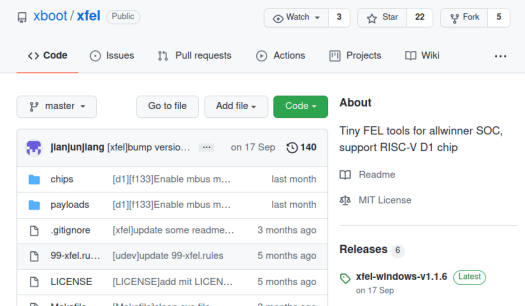 Allwinner D1s looks to be designed for cameras and smart displays and offers peripherals, embedded RAM just like Allwinner V3s or SigmaStar SSD210 Arm-based processors. Boards based on Allwinner D1s/F133 should be very cost-effective with Linux-capable RISC-V SBCs likely to sell for $10+ and up. We’ll know soon, as MangoPi-MQ1 mass production is scheduled for November, and the board should start selling on Taobao and Seeed Studio soon after.

Or will it be an openwrt experience, with only small tools like wget and ls?

Is it only me or anyone else remembers Linux being run on 4MB RAM on 80368 machines?

That boot time was just because it waited for all the services to come up completely over the network, I believe. I wrote a revision to the FreeBSD colonel that launched all the services in parallel and it booted in 10 seconds which resulted in a visit to our company from Jordan Hubbard. (Freebsd sponsor).

Not quite. I think the earliest I used was a Pentium with 16 MB of RAM. FVWM was glorious.

I deployed an 1.6 MB Linux-based router booting on a floppy. Yes, 640kB + 1024 kB extended memory on a 386SX. The floppy was a hybrid format I used to create myself by then with 18 sectors/track for the kernel (so that the BIOS can load it), switching to 21 sectors/track for the rootfs. pppd and ipfwadm were running on it. That wasn’t fast, but it did work. By then (1994) my development machine had 8 MB and would run XFree pretty fine in 800×600. Of course gcc was used quite a lot. By then it was fast and light… Read more »

4MB ram requirement must be pre 2.4 kernel.
i dont have internet connection at home back then lolz.

You’ll need to use busybox for most things but python3 and other stuff is very much doable.

> You’ll need to use busybox for most things

Not necessarily, my Breadbee’s rootfs uses standard coreutils, util-linux etc. With an XZ-compressed squashfs, there’s lots of room for a full-blown system, which doesn’t take more RAM than its size on the flash. Better, on low-memory systems, use an mtdblock and mount it directly from the NOR (though that’s usually quite slow).

The vendor SDK for the 2 x cortex A7 chips with 64MB of DDR2 that are kicking about now drives a 1024 x 768 LCD with a nice colourful UI, has a hardware video decoder streaming video into the UI etc. If you can get away from thinking that Debian is a lightweight distro then these small systems are very capable and you can get them on a 2 layer board from JLCPCB.

Not surprised at all. Windows 95 recommended to have 8 MB of RAM on a PC to run Internet Explorer at this screen resolution. It just depends how much we’re willing to waste resources due to laziness, as usual.

Renesas RZ/A is full of A9 cores bound to even less than that, with top loadout being 10MB, yet it’s still promoted for HMI and similar applications.

If they’d kept the h.264 encoder this would have been a good replacement for the Allwinner V3/S3. Any pricing yet? I would guess under $3. One could hope for $2.

Does anyone know if they pinned out rgmii on F133? They didn’t on V3s.

I wonder if it will have same problems as D1/Nezha?

could you elucidate which problems …

since it’s so expensive, not many people got that board, and those who did blame memory controller for lackluster performance.

Man, this really blurs the line between microcontroller and “single board computer”. It loses almost all its RAM and HDMI vs the D1.

I guess it’s semantics, but I usually think whether you can run an OS that allows you (the human) to interact with the computer and change how applications run; vs a microcontroller that simply runs preloaded code when powered on.

And I guess it qualifies by that simplistic measure. But I wonder what would you do with this besides build a smart camera …?

The differentiation between applications and microcontrollers is easier with Arm. Arm Cortex-M is typically found in microcontrollers, while Cortex-A cores are always found in application processors, although some Cortex-M7 parts (e.g. i.MX RT series) probably cross the line.

With other parts like ESP32 I’m often conflicted, some times I call it a microcontroller, other times a processor.

>some times I call it a microcontroller, other times a processor.

I don’t think anything produced recently is a processor. If you think about a processor like the mc68000 you get just a CPU core and some basic interrupt logic. Everything else like DRAM controller etc is external.

The ESP32 remains confusing there. For example you have a boot loader with a menu on the Odroid-GO that allows you to select the application you want to load. It’s definitely closer to the MCU, but well, having run CP/M under an emulator on it further blurs the distinction!

No exposed parallel bus, ESP32 is a microcontroller. PSRAM is a peripheral.

With this definition you can have microcontrollers with a lot of power. For example if you integrated flash and DRAM with an x86 core on a single die. But I don’t think that is buildable with current technology.

I understand but I was showing that it can be troubling to declare it a microcontroller while running a full-blown CP/M on it. And similarly the 8051 *is* a microcontroller and has multiple parallel busses. But these are corner cases, and regardless I’d still tend to agree with your definition.

Can you get to the parallel bus on an 8051? Every CPU has a bus, but on microcontrollers you can’t get to them because they are not brought out to pads on the die.

I don’t recall ever seeing an 8051 chip with as exposed address and data bus.

Not only it does, but it’s how you connect external RAM and ROM! And the ROM-less 8031/8032 only work with this. From my memory, there were 4 32-bit I/O ports, 2 or 3 of which could be assigned either to memory or to I/O. The bus looks a lot like the 8088’s in minimal mode, with multiplexed address and data, and with a pin indicating if the access is for program or data. I remember having soldered 28-pin DIL sockets on top of original RAM to support an EPROM allowing me to replace internal programs. That was fun 🙂

I think it can be seen as a reasonable rule nowadays. However 8051s would break that one.

I tend to use a different rule, considering that if your registers and/or I/Os are memory-mapped and directly accessible without MMU etc then it’s an MCU. Said differently, does the setup code for the LED blinking code outweight the loop or not 🙂

I would not call the eZ80 a microcontroller. It is derived from the Z80 which is a full CPU.

How is the Z80 full CPU different to a Cortex M? really?

AFAIK Cortex-M does not bring the address and data bus to pads on the die where it can be accessed. That is my rule for telling the difference.

There’s no reason you couldn’t do that if you really wanted to.
You could get on ARMs Design start thing, get the CPU core IP for a Cortex M0, dump it in an FPGA design where the top level exposes the AHB or whatever interface the CPU uses out to pins.

SoCs have brought processors much closer to microcontrollers than in the past, thanks to all the stuff integrated inside, so it’s true that it becomes hard to draw a line.

Regardless there’s still one that holds well: the input voltage range. MCUs usually accept wide ranges and sometimes support batteries without any regulator, while CPUs and SoCs have extremely tight ones requiring an external power controller.

>SoCs have brought processors much closer to microcontrollers >than in the past, thanks to all the stuff integrated inside, >so it’s true that it becomes hard to draw a line. I’m not going to claim to be an expert here but even on current non-SoC X86 CPUs you don’t get external access to the CPUs native bus AFAIK. You get the external part of the DRAM controller and something like DMI (for Intel) to connect to whatever chipset you have to drive PCIe slots etc. Maybe DMI is close enough to the CPU that it counts but it’s pretty far… Read more »

Someone has already made an opensource board:

Chips seem to be on taobao too.

I can’t figure out magic phrase on taobao to show me the chips.

$5.50? I wonder what the real price from Allwinner is?

Probably not $5.5 when the world gets back to normal.
The dual Cortex A7 chips don’t cost that much.

Looks like you worked something out.
I thought taobao let you look at a few items before forcing a login. Maybe they always force login now? I can’t even remember how I created my account now .. 😀

MangoPi-MQ is completely open source. After the test is completed, the Kicad-based hardware project will be released to github