DockCase Smart Hub is an 8-in-1 multifunction USB-C dock with HDMI 2.0, up to 10Gbps USB ports, Gigabit Ethernet, and a feature that makes it unique: an information display.

At first, a color display on a USB-C hub/dock may feel like a gimmick, but the information displayed may help you troubleshoot issues with USB & Ethernet speeds, video modes up to 4Kp60 HDR, power usage, and more… 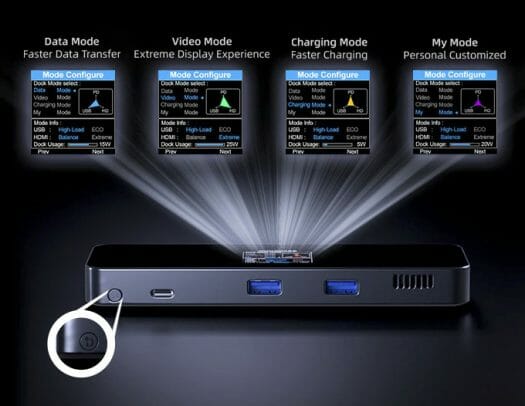 DockCase says its Smart Hub runs the upgradable DockOS “operating system” to handle the user interface and the mode of the dock. The best is probably to watch the video below to see what it is capable of.

The video shows a firmware update for “HDMI PS186”, meaning the Smart Hub should be based on Parade PS186 DisplayPort 1.4a to HDMI 2.0b protocol converter plus another USB-C chip. DockCase Smart Hub is not their first dock with a display as the company’s “Visual Dock” 7-in-1 and 9-in-1 USB-C docks were previously offered. 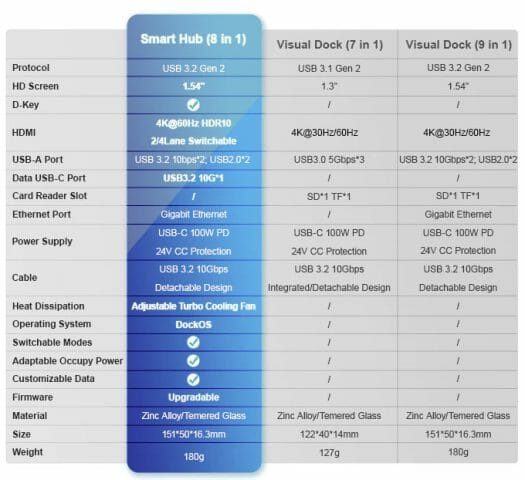 The new model offers an external button instead of a pinhole but mode configuration, supports up to 4Kp60 HDR10, a USB-C data port, a cooling fan, power monitoring, customizable data, and future expansion (or bug fixes) as the firmware is upgradable. It loses the SD card and microSD card slots found in the previous models.

DockCase Smart Hub is now offered on Kickstarter with rewards starting at $89 with the USB-C Dock and a USB-C to USB-C cable. Earlier “Visual Dock” models are also available for $59 and more. Sadly, the device is only available in a limited number of countries, and shipping appears to be free to Taiwan and China, and from $4 (US)  to $27 (Brazil) depending on the destination country. The plan is to ship the rewards in January 2022.

It looks interesting. I don’t use Apple products and I don’t need it now. I have seen USB hubs that are not smart for a similar amount of money. The fact that it has firmware is the best feature from my point of view.

It seems very ambitious to ship in January in the current supply chain situation. I’d be more willing to forgive if it were open source. That fan could be loud or not. To stand out beyond the ‘smart dock’ concept, I wish it had something like 2.5Gb ethernet. Without the ability to mess with the dock’s OS and destroy things, it isn’t enough for me. Hope for more of these smart docks in the future.

I actually read that it had 10 Gbit Ethernet the first 2 times I went through the article. It surely makes sense to have at least 2.5 Gbit Ethernet these days. These kind of devices cannot be open source because you are paying for support and future firmware updates.

> It surely makes sense to have at least 2.5 Gbit Ethernet these days

Well, exchanging the RTL8153B inside with a RTL8156B makes the Dock at least 15 bucks more expensive.