The “Snapdragon QC710 Developer Kit” for Windows 10 on Arm app development was unveiled last May, and it’s now available for $219 on Microsoft Store as the “ECS LIVA Mini Box QC710 Desktop”. The developer kit can also be purchased at a discount for $197.10 by students, parents(!), teachers, and members of the military. I suppose this applies only to the US military and showing your Taliban membership card may not work. 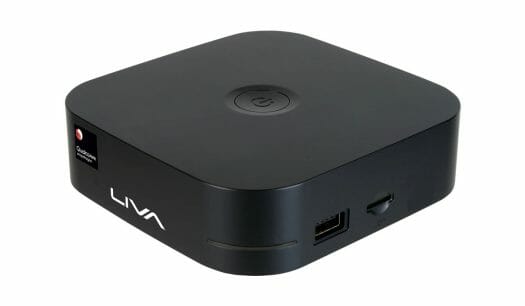 The mini PC ships with Windows 10 Home, 64-bit, but XDA developer says it can also be upgraded to Windows 11. It’s not a native Arm development platform, meaning it’s not designed to build apps (as too slow), but instead, the development kit would typically be used to test apps developed and built on a more powerful (x86) machine.

Microsoft stresses this is a product meant for developers, not consumers, so you can’t get a refund if you don’t like the color or change your mind,  and I’d assume customer support may not be available unless the devkit does not work at all. I could not find information about the warranty.

Nevertheless, if you are interested in Windows on Arm app development, the ~$200 ECS LIVA Mini Box QC710 Desktop is probably the cheapest Windows Arm machine you can get your hands on.

Short and to the point.

I’d rather have something with MediaTek in it than Qualcomm, but I don’t think either one is well-regarded in this space.

Mediatek? You must be a terrible masochist, or enjoy watching your hardware quickly be an unsupported dead end.

In any case, Windows 11 lacks driver support for Mali. So you’d be left with an unaccelerated framebuffer.

Still, Windows will theoretically boot unofficially on anything ServerReady.

Since nobody is actually saying it (and I had to look it up), the octa-core is comprised of two “big” (A76) cores with six “little” (A55) cores.

Any way to make this dual boot Linux/Windows?

Why? This box is for Windows developers testing WoA stuff who don’t want to spend magnitudes more for a Snapdragon laptop. Just look here what to expect wrt Linux on these thingies: https://github.com/aarch64-laptops/build#device-status

“interesting” overview: expensive (700€), and not available anymore (at least here in the Netherlands)

Why? Presumably for the same reasons as windows developers. It’s a relatively cheap desktop arm system. Linux actually sports arm better than windows in as lot of ways, but as you point out, sorry for specific consumer devices may be lacking.

…without accelerated graphics and with this feature set still clearly overpriced. I mean there’s 2 big cores in this thing and most probably you’ll have more fun with a Linux desktop system (that for whatever reasons has to run on ARM cores — just why?) with something like an 8GB RPi 4.

The only thing of interest in this box is the Adreno GPU. But only for a pretty small target audience called ‘WoA developers’.

Come to think of it, aren’t the most powerful Microsoft/Qualcomm chips based on the Snapdragon 8cx?

Although the point of using the 7c in a devkit could be to make sure that applications are running well on the weakest one that will support Windows 11.

That’s because TheRegister does not understand the purpose of the kit. Developers could already buy Windows 10 on Arm laptops for $500 and up to test their apps. The goal here is to provide a low-cost platform for development.

Having said that, now I can see the configuration is similar to the Samsung Galaxy Book Go laptop ($330) which adds a display and a battery, so developers who may not have a spare display, could be better off just purchasing the Samsung laptop.

As a developer, I agree with the sentiment of TheRegister article. I expected this device to be in the $99 price range given its limited capabilities. I guess the rest is supply chain / Windows license fee. The mention of the new low cost Surface devices targeting the Chromebook market makes this product pointless for Windows developers. The future there appears to be low cost x86 silicon. This brings us to the “too little, too late” part. Windows needs a “Mac M1” class device before developers invest in the ARM ecosystem. The point was to enable developers to test Windows… Read more »

I recall Snapdragon 8cx, 8c, and 7c devices being stupidly expensive at launch.

Even the HP Chromebook X2 11 with the “budget” Snapdragon 7c is currently hanging around $400 according to Slickdeals. So $220 is not that much for it, although 4 GB of RAM is a stinker.

Every aspect about Qualcomm kinda sucks when you think of it. Lots of overheating SoCs, overpriced SoCs, no AV1 decode, weird Kryo cores, etc.

Why? The purpose of this box is to enable a (probably not existing) target audience called ‘WoA developers’ to check out what’s going on in WoA with their apps. Capping the RAM to the lower limit of what WoA requires is needed for the very same reason you mentioned above (devs should test their software always on the weakest target possible).