While the Rockchip RK3566 powered SOQuartz system-on-module is designed to be compatible with most Raspberry Pi CM4 baseboards, Pine64 is working on three baseboards, which it calls hostboards, for SOQuartz, with the latest introduced in the Pine64’s November update designed to fit in a server rack.

That means we now have the “small form factor” hostboard that’s about the size of a business card, the Model-A hostboard with more features and the same dimensions as Pine A64 SBC, and the new Blade hostboard compatible with server racks. Let’s have a look at the three baseboards. 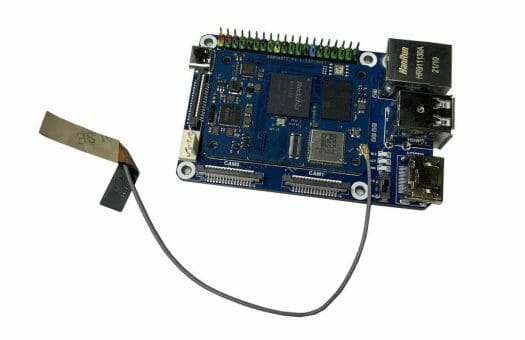 So it’s basically an adaptation of the Raspberry Pi form factor with the main ports on one side of the board. I suspect the white 4-pin header is for power and appears to the compatible with 12V/5V cables from ATX power supplies. There’s no wiki entry for that model yet, so we’ll have to wait for confirmation. 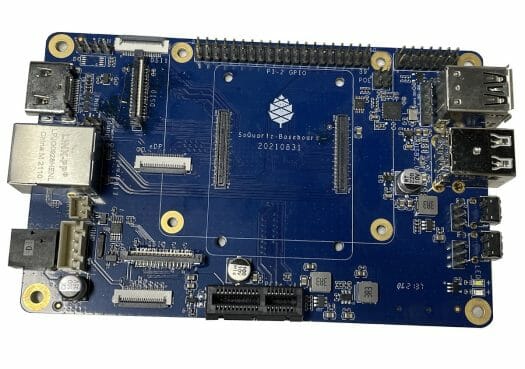 The model-A SOQuartz baseboard provides more display interfaces, exposes PCIe, and adds what appears to be two USB 3.0 ports via a bridge chip. There’s limited information about this hostboard on the wiki, but the schematics have not been released yet.

Pine64 says more than a dozen Blade hostboards can be housed in a standard 1U server rack making it suitable for clusters.

That’s about all the information we have at this time. None of the baseboards are available right now, but Pine64 are telling us they are working on more hostboards to be unveiled at a later stage.

The header on the first one looks much more like a fan header than floppy power. Do they have any info about offering a heatsink?

Yes, it could be. One the Model-A they use a standard 4-pin header for the fan though.

There’s no information about the heatsink, but heatsinks for Raspberry Pi CM4 might work, although the WiFi antenna might get in the way since the u.FL connector is on the other. Rotating the heatsink by 180 degrees might be an option, but I don’t know for sure.

Standard you say? The top one has a standard PC style PWM fan header, whereas the the Model-A uses a simple 4-pin header, that doesn’t prevent you from attaching the fan backwards.

Maybe that is the one they have yet to announce.

Because it’s (I guess) a niche market and most want something else than Realtek NICs (Intel or Broadcom most likely) anyway which makes it expensive and possibly hard to source. It’s easier to just let people pop in a PCIe card =)

The term ‘drop-in replacement’ works in both directions. Hopefully all the host boards for the RPi CM4 will work with SOQuartz and Radxa CM3 too. At least there exist some with multiple NICs: https://pipci.jeffgeerling.com/boards_cm
(but you need to be careful, some rely on Microchip’s LAN7800 which is the same thing as on RPi 3B+, there USB2 attached and responsible for numerous network problems)

Radxa is also working on two, but I think they would only work with their own module with an extra board-to-board connector:
https://www.cnx-software.com/2021/11/07/radxa-cm3-raspberry-pi-cm4-alternative/

The 1st board you mentioned is the crazy Seeed design using a PCIe attached USB3 host controller to attach a LAN7800 via USB to it ensuring high consumption (and high temperatures) and various problems at the same time (details).

The DFRobot from the 2nd link is confirmed to use a PCIe attached RTL8111H for the 2nd NIC which is actually a good choice.