ArduCam has launched a $25 16MP camera with autofocus for Raspberry Pi boards with 40% higher resolution than the 12MP Raspberry Pi HQ camera, while keeping the compact form factor of the 8MP Raspberry Pi Camera V2.

The camera is equipped with a 16MP Sony IMX519 sensor, works with any Raspberry Pi board with a MIPI CSI interface, and the company claims that with the existing camera tuning algorithms from the Raspberry Pi Foundation, the camera module beats the Raspberry Pi HQ camera’s quality in every aspect including sharpness, saturation, exposure, and more. The downside is that it lacks supports for interchangeable lenses. 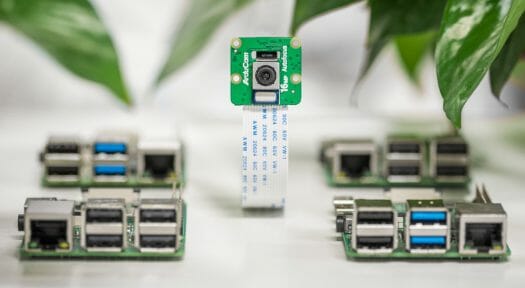 The ArduCam 16MP autofocus camera comes with a plastic enclosure (strangely not shown in any photos) and it’s compatible with other Raspberry Pi camera enclosures. The camera supports V4L2 drivers and the open-source libcamera library meaning it should just be plug and play like an official Raspberry Pi camera. The camera also supports up to 200 seconds of exposure time, and stretch goals include a NoIR camera version ($20000 funding), as well as support for the stereo camera HAT and multiplexers ($30,000 goal). You can watch the video below for an overview of the camera capabilities and some samples.

The $25 price tag is the retail price, and it’s the same as the Raspberry Pi Camera v2, and half the price of the HQ camera. But there’s a 40% discount in a Kickstarter campaign where ArduCam offers the 16MP autofocus camera, the enclosure, and a 15 cm Flex cable for just $16. There are also bundle with multiple cameras, a pan-and-tilt kit, and a CSI to HDMI adapter for people needing longer cables. Shipping and Taxes are not included, and there’s no estimation for the former. The rewards will ship right after the campaign is complete in January 2022.

Let’s give it a try. In for two cameras. I hope they use reasonable shipping.

Same here for one of em

Hey, @cnx-soft, want a followup from us if/when they arrive?

Have to get an hdmi adapter for my pi4 next

Yes, sure that would be great.

Looks nice. I’m surprised though that it’s marketed as a “camera module for all Raspberry Pi models”. My understanding was that the camera input system of the raspberry pi was closed and that (except compute modules iirc) for anything other/better than the V1 camera module and clones thereof it was crippled/crypto-dongled with a crypto chip (ATSHA204A or similar) so as to prevent users from buying/using cheaper clones of the raspberry camera modules (except of the old V1 module) or other cheaper/better camera modules with their raspberry pi… and force them to buy the original and rather pricey camera modules from… Read more »

Afaik, the crypto chip is only restricting access to some ISP post-processing from Sony/Broadcom, so you can still use it without the crypto chip, but the colors might be bad, so Arducam probably made their own color pipeline.

I call BS on this one. Impossible to match the imaging quality of a good C-mount lens with tiny lens they put on it.

The downside is that it lacks supports for interchangeable lenses.

Read the next sentence.