Blues Wireless has just launched the Wi-Fi Notecard M.2 module that can be used as a replacement to the company’s Notecard LTE Cat-M / NB-IoT M.2 modem that sells with 10 years of connectivity up to 500MB for $49 and up.

The Wi-Fi Notecard came to be as some customers wanted to have mixed deployments where cellular makes sense in some locations, while Wi-Fi is better suited to other sites. Others preferred to use WiFi during development or prototyping to save on Notecard cellular data usage. 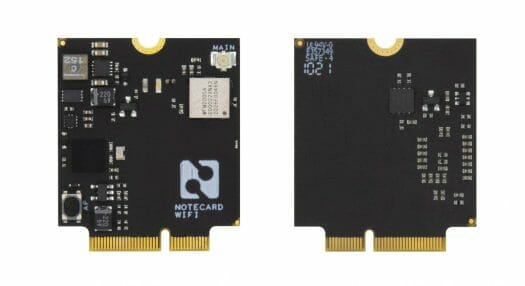 The main advantages are the power consumption of the module at just 8 microamperes while idle, and hardware and software compatibility with the cellular Notecard since you can simply reuse the same carrier board, and the API is also the same except for the WiFi and Cellular-specific calls. That means the documentation is mostly the same as well.

As a reminder, the Notecard can interface with any MCU using 3.3V or 1.8V IO voltage, and relies on a JSON command interface over I2C, UART instead of the usual AT command set. The module connects to an “extremely thin” cloud infrastructure that routes data to AWS, Azure, GCS, or your own cloud in a secure fashion (TLS). Blues Wireless also provides development kits with a Raspberry Pi HAT as well as the STM32L4 based Swan board in Adafruit Feather form factor together with a carrier board to get started with Wi-Fi or Cellular Notecard easily.

The company is currently selling the Wi-Fi Notecard for $20 plus shipping, and you should also get at least one of the “Notecarrier” ($15 to $25) to get started with the Notecard using the Swan board, a Raspberry Pi, or other MCU or Linux SBC. More details may also be found in the announcement.