Bluetooth LE audio was first announced in January 2020 together with the LC3 audio codec, and promised to deliver a much longer battery life for your Bluetooth headphone or battery-operated speaker, as well as support for multi-stream and broadcast audio. But it’s taken some time before being adopted in chips like Qualcomm QCC305x/QCC3056 or FastConnect 7800, as well as operating systems with, for instance, Android 12 being the first version of Android with LE audio support. 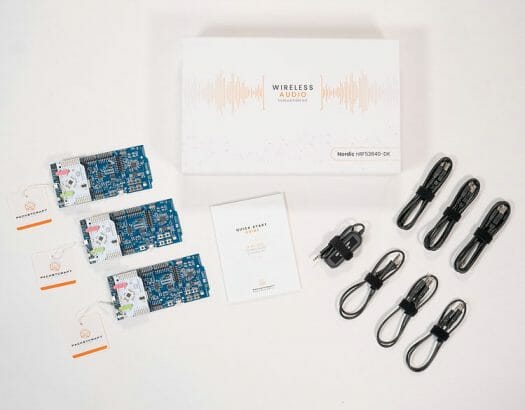 The kit is comprised of three Nordic Semi nRF52840-DK boards each fitted with a Packetcraft audio interface board (AIB) equipped with two 3.5mm audio jacks for microphone and speaker, plus a ground loop isolator, three 3.5mm audio cables (TRS 1/8″), three USB cables for power, and a Quick Start Guide.

Each board is pre-loaded with Packetcraft LE Audio Eval Kit Binary Firmware with the following key features:

Three boards are needed to test the multi-stream features of Bluetooth LE audio with one transmitter and two receivers. 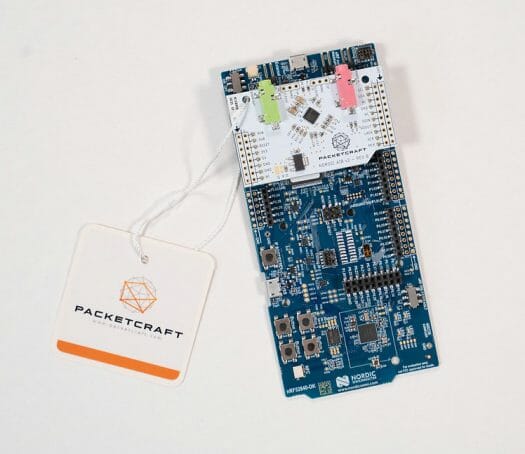 This Bluetooth Audio LE evaluation kit is mostly designed for companies wanting to design products around the new technology and sells for $1,995. Note the software used in this can not be used in commercial products, and the LC3 codec inserts an audio artifact both on encode and decode, so it’s strictly for development. A separate per device license is probably required for commercial deployments. Packetcraft has also been working on  Nordic Semiconductor nRF5340 and the Laird Connectivity BL5340 evaluation kits, but those are currently unavailable (out of stock). More details about the Bluetooth LE audio software stack can be found on the company’s website.

Via press release and thanks to TLS for the tip.