Arducam Pi Hawk-eye is a 64MP “ultra-high resolution” camera for Raspberry Pi 4 or CM4 with built-in autofocus following the company’s 16MP autofocus camera introduced at the end of last year.

The new camera module will allow you to take still images at up to 9152 x 6944 resolution, but videos will still be limited to 1080p30 on the Raspberry Pi 4. The Pi Hawk-eye is also compatible with the official Raspberry Pi v1/v2 cameras, meaning you can reuse your enclosures/mounts, and keep on using the same software, for instance, libcamera. 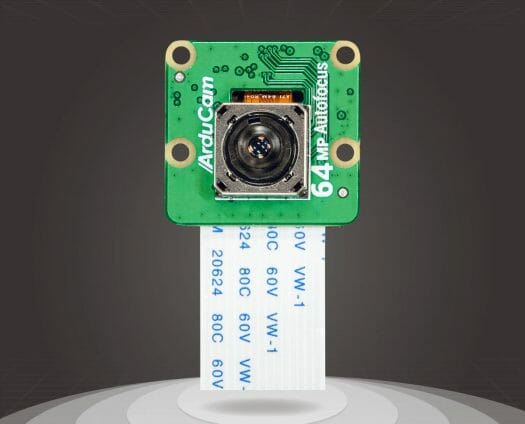 Note that while a Raspberry Pi 4 or Compute Module 4/4S is required for 64MP resolution, the previous generation Raspberry Pi (2/3/Zero W/Zero 2 W) boards can still be used with the camera but only up to 16MP. That means Arducam Pi Hawk-eye is mostly interesting for Broadcom BCM2711 (4x Cortex-A72) powered Raspberry Pi boards or modules, and is designed for taking still images since the maximum video resolution and framerate are the same as the 16MP camera. Future Raspberry Pi board may be able to take advantage of the higher video resolution and framerate enabled by the new camera module. 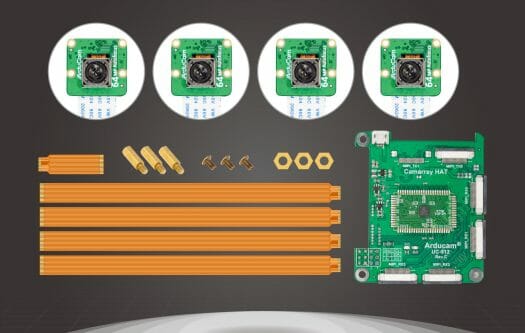 The company also offers a 64MP Quad-Camera Kit with an Arducam UC-512 expansion board and four 64MP Pi Hawk-eye camera modules that allows the user to take four high-resolution photos from a single Raspberry Pi 4 (almost) at the same time. Other accessories include a camera & cable extension kit using RJ45 ports and Cat-5 cable to extend the range of the camera, a pan-tilt kit, and a CSI-to-HDMI adapter set all shipping with one 64MP camera.

Arducam is taking pre-orders now with shipping expected in early May. The Pi Hawk-eye camera module sells for $35.99, the quad-camera kit for $194, the cable extension kit for $85.98, the pan-tilt kit for $62.98, and a CSI-to-HDMI adapter set for $49.98. As I understand it, all those are pre-order prices with a 40% discount, and prices should increase in May. Additional information may be found on the product page, where you’ll also find several still image samples taken with the camera.

It seems a good camera to try using it (with manual focus) connected to an astronomical telescope, doing series of pictures and stacking them… Is there any data like an ISO value?

Readinging their docs and examples (though it might be for a different camera model?) It seems the focus is software controlled

There’s no manual focus on the hardware; you can manually focus through software using a utility Arducam offers (just like on their 16MP Autofocus camera).

I have a unit and will be testing it soon!

Where will you be sharing your thoughts?

Jeff, I always enjoy your videos and blogs! I just happened to watch one today, where you tested the 16MP auto-focus. I was searching for a solution to my latest problem. I just purchased the Arducam Pivariety 16MP, which uses the Sony IMX298 sensor. I believe yours was based on the IMX519.

But I’m having trouble getting proper drivers installed on my Pi. It seems that Arducam only supports kernel versions up to about 5.10.92, but I’m on 5.10.103. Do you (or other readers) know where I can get the proper driver for this camera?

For those looking for the link:

So at least possible from the command line. Very cool. Hopefully also available through some library/API

This is good to hear. There has been a big lack of AF camera modules for the pi. The lack of AF or (in the case of the standard Pi cameras) even manual focusability makes the pi cameras unusable for very common use cases of phone cameras. That is, scanning QR codes, and impromptu document or receipt scanning. It finally becomes possible to DIY a camera with the capabilities of a 10+ year old phone camera. 64MP is undoubtedly way higher than the lens resolution, but maybe the image can be usefully binned / scaled to 16MP or 4MP. I’m… Read more »

Could this this be used as a high end film scanner camera in place of a DSLR camera?

I think the image quality won’t approach that of a DSLR. But if you want to scan film, a DSLR won’t match an actual dedicated film scanner either.

Here’s hoping the shipping won’t be $30usd like it was on their recent kickstarter. Had to request a refund for that camera due to the absurd shipping cost.

I found this video for this camera.
It looks very premium quality!

could this be the Samsung GW1 sensor?
https://semiconductor.samsung.com/image-sensor/mobile-image-sensor/isocell-bright-gw1/