StereoPi stereoscopic camera based on Raspberry Pi Compute Module 3 was introduced in late 2019 on Crowd Supply.  The camera can record 3D video, create 3D depth maps with OpenCV, and benefits from the Raspberry Pi software ecosystem.

The developers are now back with an upgraded model. StereoPi v2 comes with many of the same features, but as it is based on Raspberry Pi CM4 (Compute Module 4) it offers better performance, Gigabit Ethernet, Wifi & Bluetooth connectivity out of the box, while other features like PoE, TFT screen, shot button, etc.. are optional. 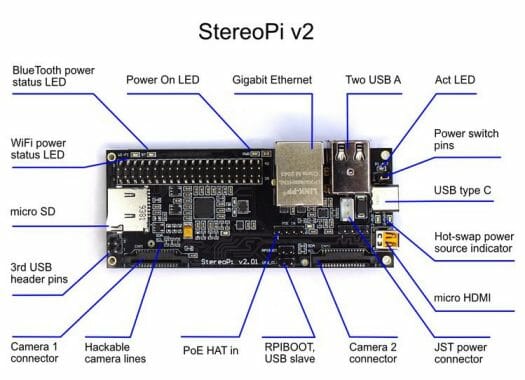 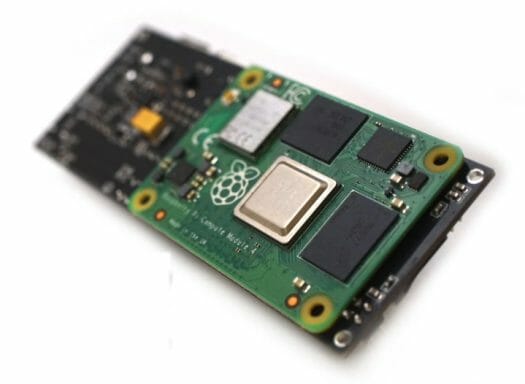 The developers also designed a camera kit following requests from backers and customers for the first version of StereoPi. The kit includes a small TFT IPS screen as a viewfinder, a shot button, an acrylic camera mount plates with the tripod support, a tripod, and all necessary jumper wires, bolts, and nuts for assembly.

Other accessories include a PoE shield to power and control the camera with a single Ethernet cable, as well as metal housing for the heavier 16mm lenses used by the HQ camera as shown in the very top photo of this article.

Alternatively, the company also provides an OpenCV image for the camera. You’ll find resources to get started on the Wiki and support in the forum.

StereoPi v2 has just launched on Crowd Supply with a $35,000 funding goal. Rewards start at $45 for StereoPi v2 Slim, a version of the board without USB, Ethernet, nor GPIO header for weight or space-constrained applications such as drones and robots. The standard board goes for $49, while the StereoPi v2 Camera Kit foes for $169 including Raspberry Pi CM4Lite wireless with 2GB RAM. A pledge of $19 is asked for the StereoPi PoE HAT, and $49 for the metal housing. Shipping is $8 to the US, and $18 to the rest of the world for most perks. Backers should expect their reward(s) to ship at the end of April 2021.

$49 for that tiny piece of machined aluminum is ridiculous when a $2 piece of injection molded plastic would suffice.

They say the plastic enclosure is not strong enough for heavier lenses. Maybe something mixing metal and plastic, like in my camera, would have been cheaper.

I played with a generic USB stereo (or 360 if you reorient the sensor) camera some time ago: https://rk.edu.pl/en/quick-look-stereo-usb-webcam-and-stereo-vision/ – the USB2 was $75 but there are USB3 options as well.