Texas Instruments has just launched the new Sitara AM62 family with AM623 and AM625 single to quad-core Cortex-A53 processors designed to provide IoT gateways and HMI applications with AI processing at low power, in some cases with up to 50% reduction in power consumption.

The AM623 processor specifically targets Internet of Things (IoT) applications and gateways that may benefit from object and gesture recognition, while the AM625, equipped with a 3D GPU, should power HMI applications with edge AI and up to two full-HD displays.

AM623 and AM625 both support Linux, and Android is also supported on AM625 with its 3D GPU. I’m unable to find any AI accelerator, so the “Vision Analytics” feature might be a software solution, and Texas Instruments simply says “the AM62 processor brings low-cost analytics to HMI devices by enabling basic camera-based image processing and edge AI functions, such as detecting and recognizing objects”.  They do have documentation for it and a demo based on MulticoreWare face recognition solution with AM62x showing the capabilities of the solution.

The company also explains that AM62 processors can reduce power consumption in industrial applications by as much as 50% compared to competing devices, and for instance, an application powered by AA batteries could remain on for over 1,000 hours. This is made possible by the power architecture that features two dedicated power rails and five power modes, plus the new TPS65219 PMIC optimized for AM62’s power supply requirements. 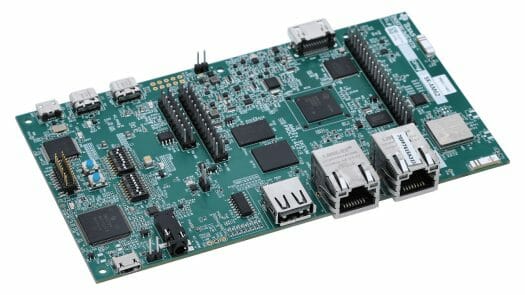 Customers can evaluate the new solutions with the Sitara AM62x Starter Kit (SK-AM62) with the following key features:

Both Sitara AM625 and AM623 processors are available now with pricing starting at less than US$5 in 1,000-unit quantities, but the sample price is $19.50 on the TI website. The AM62x EVM is sold for $149. Further information, including technical documentation like datasheets and links to SDKs, can be found on the product pages for the processors and starter kit.  The company will also showcase the new AM62 processors and related solutions for edge AI and electric vehicle charging HMI applications in booth No. 215 at Embedded World 2022.

Are they providing a friendlier environment for PRU-SS programming? last time I checked long ago, documentation was far from ideal.

I’d love to see this in a beagle form factor, with 2 GbE interfaces, USB DRD and Host and a decent WiFi chipset.