ΔMIDI 001:model D is an Arduino-based MIDI controller inspired by the Minimoog Model D synthesizer first introduced in the early 1970’s, but not in production anymore.

The MIDI controller is compatible with VST (Virtual Studio Technology) plugins designed for the Minimoog synthesizer, DAWs (Digital Audio Workstation), and as an open-source, can be directly modified or tweaked by its user. 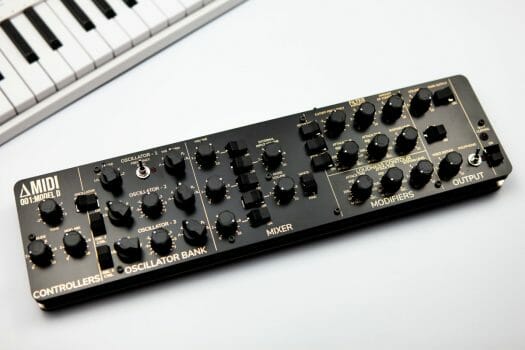 The 001:model D MIDI controller has been tested with Arturia Mini V, Native Instruments Monark, UAD Minimoog, and GForce MINIMONSTA on Windows, macOS, iPad with USB-C adapter, and Linux machines including the Raspberry Pi SBC. Eventually, the MIDI controller will be open-source with Arduino firmware, source code, mechanical design, schematics, BOM, and PCB design released publicly, but only after the crowdfunding campaign is complete, and right now we only have the low-resolution schematic above.

ΔMIDI has launched the audio device on Kickstarter with a 16,000 Euros funding target, that’s about $16,000 thanks to the Dollar/Euro parity… An early-bird pledge of $225 with 20% VAT included (it ships from Poland) should get you a fully assembled 001:model D delivered in August 2022, just right after the crowdfunding campaign is over.

Sadly, it doesn’t seem to have a MIDI interface, only a USB one. Thus it will not be usable with the majority of instruments and only be limited to PC-based applications. I understand that it retains some value in this domain but that’s still significantly castrated, especially when you consider how cheap it is for a micro-controller to emit bytes on a 31250 bps UART.

No, David, it does not help, this cable would be useful if that device had a MIDI connector, and would be a good justification of having only the MIDI connector if a choice had to be made between the two. But since the project only has the USB one, it’s a USB device thus may only connect to a USB host, and no adapter will solve that.

Well it is open source and the schematics are there, you could modify it to have native MIDI or pay someone to do it, it should be a simple task for someone with the knowledge so I figure it shouldn’t cost much.

Yeah, connecting first to VST Studio kind of knocks it out of busking venues…

What about the LED tells, is it enough to be looking at VST while running the board, d’ye think?

Tho one of the ‘stretch-goars’ may bring MIDI output.

Every 001:model D will be equipped with an additional MIDI output in the 3.5mm TRS “audio” jack format. No cost added. This output will work simultaneously with the MIDI-USB interface.

I couldn’t find any file for the “open” hardware / software.