The can2040 project is a software CAN bus implementation for the Raspberry Pi RP2040 microcontroller that leverages programmable I/Os (PIO) to achieve reading and writing CAN 2.0B data frames at rates up to 1Mbit per second.

Kevin O’Connor, the developer of the project, further explains the implementation uses only one of the two RP2040 PIO hardware blocks, so it is possible for a single Raspberry Pi RP2040 chip to have two separate CAN bus interfaces. 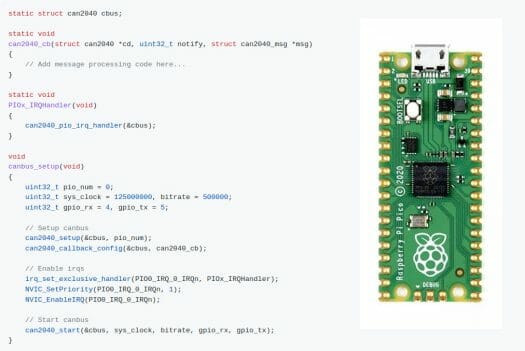 Some processing also happens on one of the Arm Cortex-M0+ cores of the microcontroller with the processing time dependent on the amount of bus traffic, and a fully saturated CAN bus at the fastest supported rate of 1Mbit/s may use up to around 30% of that core when clocked at 125MHz, so that should still leave plenty of room for other tasks that may run on the system. I could not find any information about RAM and storage footprint.

We’ve previously seen hardware-based CAN implementations with the Raspberry Pi RP2040 microcontroller, such as CANPico and CanBed RP2040, using a MCP2515 or MCP2518FD CAN controller and MCP2551 or MCP2562FD CAN transceiver, and as I understand it, the can2040 code removes the need for the CAN controller, so you’d just need to connect a CAN receiver the Raspberry Pi Pico or other RP2040 board. That way, the software CAN bus implementation for RP2040 should be able to interoperate with other (hardware-based) CAN bus implementations, and a bus may consist of a mixture of can2040 and non-can2040 nodes. Note there are limitations that may impact the CAN bus:

We’ve received an additional comment with regards to the lack of error frames (on LinkedIn):

Worth noting it doesn’t generate error frames. This has a lot of consequences, because much of the protocol relies on the error confinement rules. In particular, atomic broadcast. This is a key feature of CAN that separates it from other protocols like Ethernet (which also just drop frames) and is a major reason it is so robust in practice.

Are you saying it does not need a CAN driver chip, and can connect directly to the CAN bus?

That’s my understanding that this acts as a CAN controller, but you’d still need a CAN transceiver like MCP2551 or MCP2562FD to handle 12 or 24V signals.

Thanks, I will give it a try.