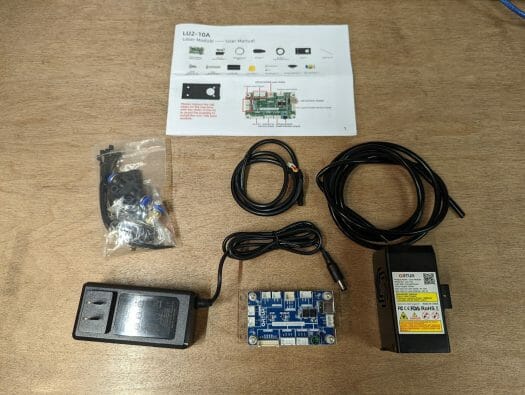 Karl here and I will keep this short for you. First I will share my experience installing an upgrade module for the Lasermaster 2 Pro, the Ortur LU2-10A. The LM2Pro came with a 5.5w laser module and this upgrade brings the power up to approximately 10w optical power. Spoiler, I am not happy with the kit. [Update (CNXSoft): The company has put us in direct contact with Ortur engineer, and they’ve promised to help us fix the issue. We’ll update the post if/once it is resolved] 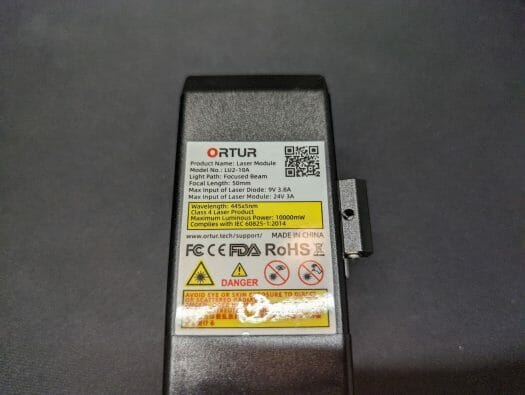 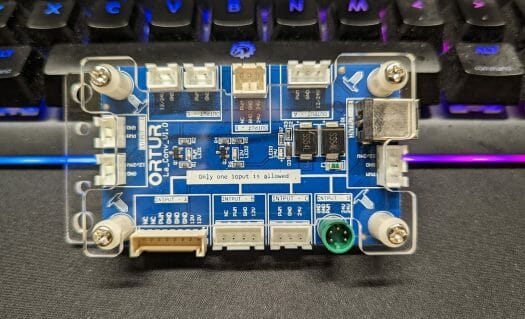 The Ortur LU2-10A kit comes with a very simple adapter board that appears to do two tasks. 1 is to adapt wiring, and 2, inject additional power for the higher power laser module. It looks like the board will adapt to a lot of different connection types.

I followed the instructions and the first time I plugged everything in the laser came on full power for about a second. I was like WTF and it scared the hell out of me. I got very lucky I didn’t burn anything or myself. I had a cork mat down and saved my tabletop. Strike 1.

Then after some time, I found out that pressing the reset button on the LM2PRO turns on the laser module. This happens every time. Strike 2.

I thought I maybe got a bad board so I contacted “Madethebest” who kindly sent over the sample for review. After some back and forth I was unable to get them to understand so I made a video to show what I was experiencing. At which point, they remained silent for almost 2 weeks. Then I get an email asking when I would be done with the review. I was upset at this point and here we are now after returning from vacation.

While I was waiting I found one Italian YouTuber with the kit and after some crude translating on my Pixel 6, I believe our kits are behaving the same. I think he says that he did not use the included power adapter because the cooling fan stays on all the time. I was unsure of following his method because it goes against the instructions and I was afraid it would pull too much power directly through the original main board and overload something. I did eventually try this and omitted the additional power supply and everything seems to work as intended. But, I have not done any long burns.

I don’t think this upgrade is ready for prime time. The laser module appears to be strong with the limited testing I have done, but the upgrade execution is poorly done and is too dangerous in this state. I am really surprised with Ortur, and I hope they either discontinue the LU2-10A upgrade or resolve these issues. If something changes I will post an update at the end.

While waiting, I did extensive testing with measuring laser power following this blog post. In the blog, he explains about heating up a known substance with a laser for a known amount of time to calculate power. I am super impressed at how repeatable this method is as long as you follow a few rules. 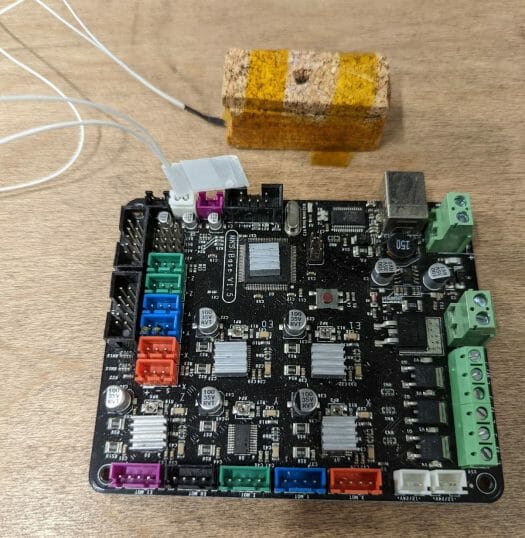 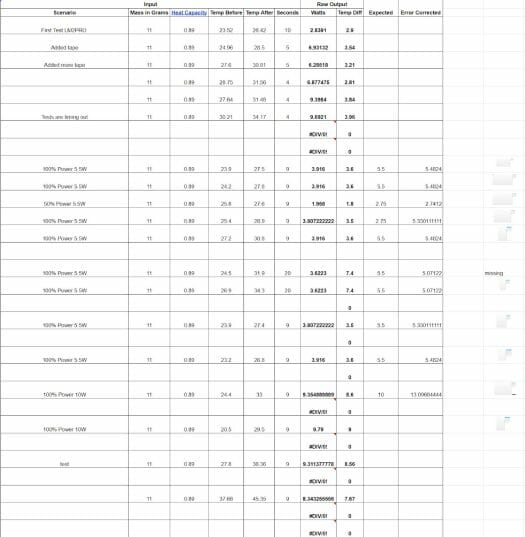 I did some initial testing with an old 3D printer board and a thermistor attached to a piece of aluminum encased in cork and was blown away at the repeatability of the testing. I used Repetier host to connect to the 3D printer board and graph the min/max temperature, manually read the temperatures and document it. My initial tests were rudimentary, so I moved on to prototyping on a microcontroller. I now have a microcontroller and a temperature sensor doing all the calculating and continue to be impressed.

That is all for today. I will share the meter progress later. I have some stretch goals and would like to get a few higher-power lasers and a professionally calibrated meter and that will take money and time. They have 20W optical power diode modules, and I would like to test against a 40+W laser tube.

Time to invite Ortur people to some reading, they should know them well now 😉

Hi Karl, Your measurements are interesting. I did something similar in the past, and very non-scientific, to compare some of my modules, and found that they were roughly of the advertised power. I also tried to use a solar panel behind a lens to widen the beam. That was less reliable because the power depends on the beam’s surface and it’s hard to have a constant one with different modules. Regarding the fact that at power up the board turns the laser on at full power, I’ve faced a similar issue in the past on my Eleksmaker board and I… Read more »

Karl, were you ever able to get the issue sorted out. I got my LU2 upgrade over the weekend and had the same issue except my laser stayed on until I pulled the power and nearly started a fire but luckily the fans blew it out. I am trying to get made the best to get me a return label as I don’t think the upgrade is safe to use but they aren’t being overly helpful.

No. I tried working with them but got no response.