Espressif ESP-WIFI-CSI software relies on the disturbance in the WiFi signals between one or more ESP32 boards and a router to detect whether humans are present in a room, or even indoor positioning, providing a cost-effective solution since no sensors are needed.

Channel state information (CSI) leverages carrier signal strength, amplitude, phase, and signal delay indicators to reveal the signal scattering, reflection, and power attenuation phenomena that occur with the carrier as the transmission distance changes. This is typically used to measure the channel status of the wireless network in Wi-Fi communication, but it’s also possible to analyze and study the changes in CSI to detect movements such as walking and running of people or animals, and Espressif claims it can also capture subtle movements caused by small movements such as breathing and chewing of people or animals in a static environment. 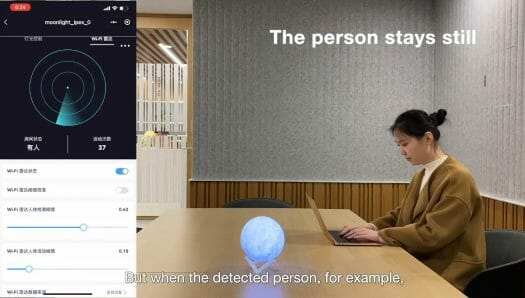 ESP-WIFI-CSI implementation works with all ESP32 series microcontrollers including ESP32, ESP32-S2, and ESP32-C3, and does not require any changes to the hardware, although an external IPEX antenna is better than a PCB antenna which has directivity. The company also explains Bluetooth LE can also be leveraged for presence detection by scanning surrounding devices to assist with the detection.

Typical CSI applications include intruder detection, positioning and ranging, as well as human activity detection and gesture recognition. You’ll find more details on Github with the source code, sample, and a more detailed explanation showing how this all works. More details on ESP32 WiFI CSI indicators can be found on the documentation website. The video below from 2021 also shows a demo of ESP-WIFI-CSI for human detection only (no indoor location).

I could not find details about indoor location range, accuracy, and features like breathing detection when multiple ESP32 boards are in use, so it’s unclear whether ESP-WIFI-CSI will be able to provide the same type of solutions such as ToF sensors, for example, the VL53L5CP used in laptops for human detection and gesture recognition, as well as UWB sensors like Novelda UWB x4 which can detect submillimeter movements for applications such as heating or air conditioner control in a hotel room, where human detection must work even if the guest sleeps.

” Espressif ESP-WIFI-CSI software relies on the disturbance in the force WiFi signals between one or more ESP32 boards ” Almost a Jedi, Luke.

you just made my day

A friend asked me about investing in a ToF sensor startup that wanted to give smart TV presence detection so they’d be able to turn off their screens when people leave the room.

That was over 5 years ago…

I remember the very first patent I worked on when I joined a cable company was occupancy sensing from the STB. We ended up citing a handful of patents and its been cited over a thousand times. Targeted advertising is fat more valuable than playing a random ad to a potentially unoccupied room so there’s hope for a ToF or camera over the 500 cheaper ways of doing it

Looks good for “presense detection” in smart home applications. I try to find somethin useful for my Homeassistant setup recently.
For now, mmWave FMCW radars on 24/60 GHz with human pulse detection looks promising but price is x10 to ESP32.

Very interesting, thanks for sharing! I think I’ll give this a try, just out of curiosity, I like the almost non-intrusive approach.

This kind of works and it is free assuming you already needed the ESPs in the room. Sure the other technologies are better but they are also way more expensive. They’ve had this for a couple years now. Consider it more of a presence hint than reliable presence detection.

Now If they could only build a cheap detector of movement, to aid blind people?

Radars are extremely cheap on Ali. Starting for pennies. Obviously not for pennies but 40gz and up radars are also available.

Which are those newer esps that support 801.11mc?

Those radars are really bad. If you want something reliable, then it is expensive.

I find this a little disturbing from a privacy standpoint, if the tech is really as good as advertised.

This doesn’t gather any personal identifying information. All it detects is signal disturbances. If I were to characterize it, it has the same effect as a PIR.

This is like trying to track a person by following their shadow on the ground. Sometimes you have a clear shadow, sometimes multiple shadows, sometimes no shadow at all. Shadows are very indistinct, you aren’t going to identify some one by their shadow in most cases. It is nothing like a radar which can detect the heart pulse of people in a room.

What is the point of the GUI radar display? It didn’t seem to change during the demo video.