Last year, Michael Klements made a nice-looking DIY Raspberry Pi 4 mini server with an OLED information display and a 52Pi UPS Plus module with 18650 batteries. It also included the company’s Ice Tower module for cooling, but if you wanted one you had to make your own with a 3D printer and a laser cutter.

52Pi appears to have noticed and liked the design, as they created something similar with the Raspberry Pi Mini Tower NAS kit taking one M.2 SATA SSD instead of using the UPS module. There are also a few tweaks to the mechanical design with the OLED display at an angle for easier reading. 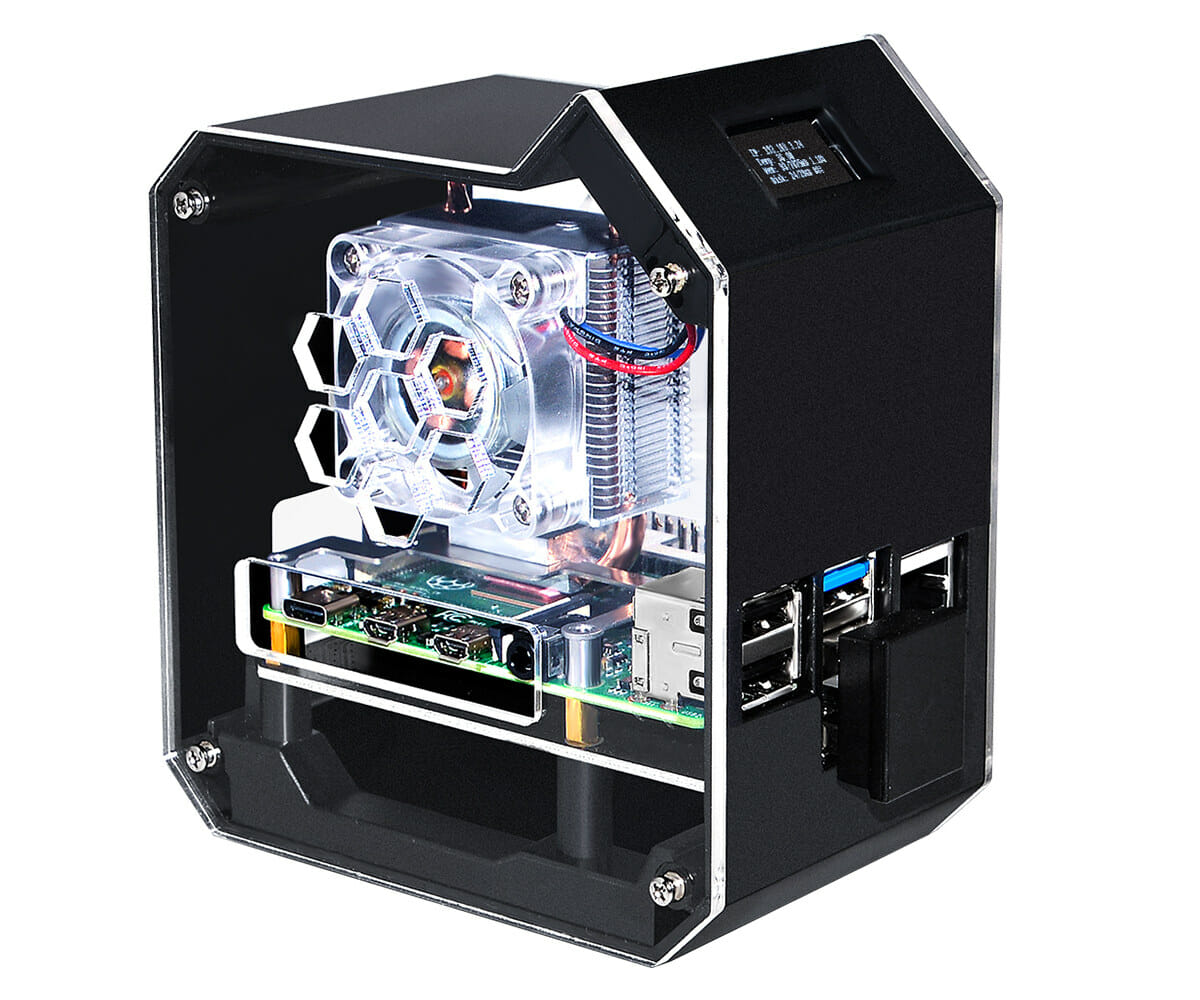 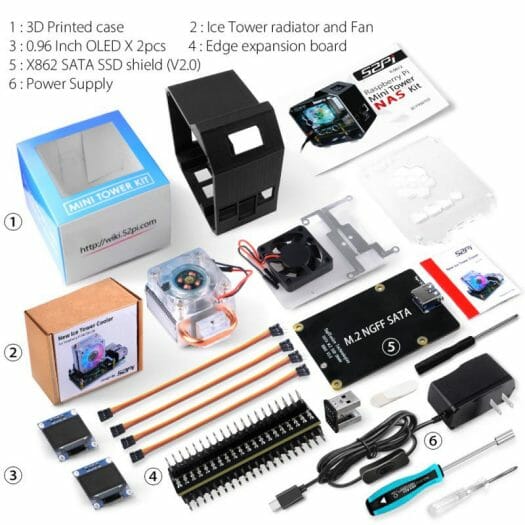 There’s also a user manual, but some people complained it’s not detailed enough. You’ll also find installation instructions on the Wiki, where we also learn that 2.4GHz WiFi may not work that well with the kit, so using 5GHz is recommended (But it looks to be a copy/paste from another section of the Wiki for a metal case…).

It’s also possible to connect Raspberry Pi HAT through the 90-degree adapter plus a ribbon cable. I’d assume it might also be possible to connect a HAT internally if you don’t connect the Ice Tower for cooling, and only rely on low-profile heatsinks plus the included black fan. 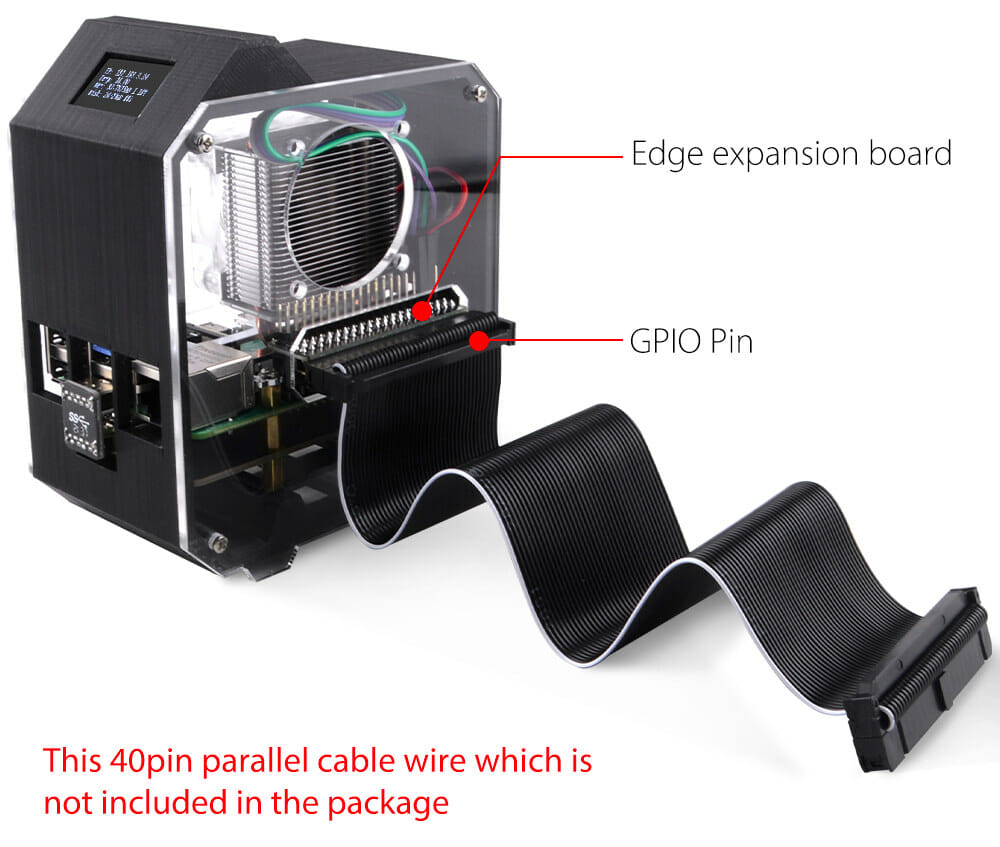 Everything should work immediately after assembly and installing Raspberry Pi OS, except for the OLED display for which you’ll find some demo code on Github.

52Pi/GeeekPi sells the Raspberry Pi Mini Tower NAS kit on Amazon for $60 (without power supply), but you’ll find more options on Aliexpress with the enclosure only ($26.99) up to a full kit with a Raspberry Pi 4 8GB.

Or you just buy a real secondhand computer with a warranty that can run Linux/windows.
Don’t like that buy a RPI 400. Still cheaper ( than case + RPI 4) in UK layout.

Does the RPI substitute come with built in screen, keyboard and battery ? If not, not a real like for like example.

That looks like a gen 2 core, I didn’t think those were even patch for spectre vulnerabilities. It’s probably ok but it’s 10ish years old at this point. Really I’d only run Linux on it.

I think you’re wrong, Intel patched Spectre and Meltdown on Sandy Bridge and Ivy Bridge back in 2018 or so.

Looks like you’re right that was the oldest gen they fixed.

I try to keep up with disabling all those patches. Just drags performance down. Theoretical security benefit is debatable.

I don’t want to be an “”” but I will be anyway :p
It’s not a post/article about what you should buy instead or what’s better (value/price). It a post about a raspberry pi NAS kit.
I know that I can get better for the price but would you really prefer a cheap Chromebook or whatever instead of this?

Agreed! Look to comments for some intelligent feedback & it’s full of “clever” people with clever comments. I swear it’s like being on Reddit!

What you’re seeing is a mini revolt against RPi. People are hungry for better options.

This tends to happen every 3yrs or so while we wait for the next pi model to release.

Simply because, if this device is the answer to your question, your question must have been incredibly stupid.

Maybe the question was ‘How to combine a device you can’t buy (RPi 4B) with expensive storage (SSD) in least reliable way (USB3-A attached), unnecessary energy waste (a fan), a moronically large heatsink, a useless display that will fail within months (so two of them included), some see-through chassis and lots of EMI ruining 2.4GHz Wi-Fi?”

I need any SBC , that is able to connect 2 SSDs to it. HAs to have also 1 GBPS ethernet port. Any1 can recommend?

If you want to connect one 2.5-inch SATA SSD and one M.2 NVMe SSD, there are a few. But if you need 2x M.2 NVMe sockets it’s more difficult to find. Otherwise, there’s always the option of getting USB 3.2 to NVMe drives, but I suppose that’s not an option for you.

Absolutely useless waste of hardware since SSDs die for totally different reasons than HDDs. SSDs wear out with write activity and this is something you can act on upfront by checking the respective SMART attribute (every monitoring solution will check this by default and alert in time, you just need to ensure to buy quality SSDs and not some cheap garbage). All other disasters that could result in one SSD being gone (electrical hazards, theft, fire and so on) always affect both SSDs at the same time. And to make things worse or since ‘RAID-1 out of 2 SSDs’ is… Read more »

Also Rock Pi 4 and Rock Pi Nas hat. ” But the company did also introduce a Penta SATA HAT that’s exclusive to the Rock Pi 4. Radxa said this model “utilize[s] the M.2/PCIe on ROCK Pi 4 to expand to up 5x SATA ports,” and that it “adapt[ed] four internal SATA and one eSATA design which makes the connection flexible if the user wants to use external disks.” Here are the Penta SATA HAT’s other highlights: Up to 5x HDD/SSD, support 2.5-inch or 3.5-inch SSD, up to 100T Storage 4x SATA + 1x eSATA with power Utilize two lanes PCIe 2.1 buses on… Read more »

PINE64 RockPro64 and a PCIe SATA controller (such as ASM1164/1166/JMB585) should do just fine and not break the bank, be a bit careful about NanoPi devices as few have upstream support in Linux/BSD. I’ve briefly used a ASM1166 board with RockPro64 without any issues on FreeBSD myself.