Radxa E25 is a modular router with two 2.5GbE ports based on the Radxa CM3 Industrial (CM3I) system-on-module equipped with a Rockchip RK3568 quad-core Cortex-A55 processor, and optional support for WiFi 6 and 4G or 5G cellular connectivity.

I got an early sample of the Radxa E25 carrier board in January, but the company has now refined the design with version 1.4 of the board and will launch the Radxa E25 as a complete router with an enclosure similar to NanoPi R5S and LinkStar H68K we’ve covered previously. 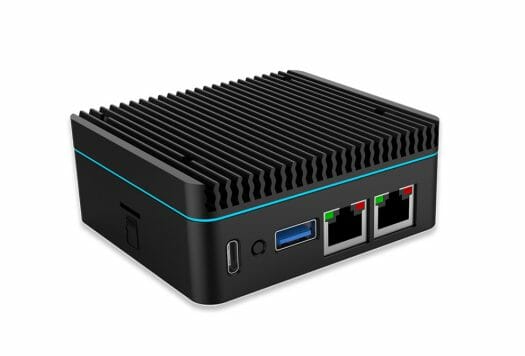 The M.2 socket has been tested with Lenovo M.2 2242 SATA SSD and Quectel EM05 4G LTE module, while the mini PCIe socket has been confirmed to work with DR900VX WiFi access point module, Quectel EC25 4G LTE module, and Quectel RG200 5G module. Radxa will provide Debian and Ubuntu server images, as well as a hardware access/control library for Linux that you eventually become available in the wiki.

Radxa could not give us availability information, but they did provide pricing for three variants of the router with case and heatsink:

The Radxa E25 modular 2.5GbE router will be sold on Allnet and Ameridroid, but we just don’t know when just yet although we were told long term supply will be guaranteed until September 2029. [Update: the router is already available on Allnet China]

It seems to be for sale on the allnet shop already.
Really cheap, and nice specs and case included. If I didnt already have the Rock 5b, I would have gone for this model.

> sold on Allnet and Ameridroid

Does mentioning of Allnet means only self-importing via https://shop.allnetchina.cn or also full EU distribution by Allnet?

@willy – I found a workaround for you usb console needs for these kind of devices https://uk.farnell.com/ftdi/usb-nmc-2-5m/cable-usb-usb-nmc-ft232r/dp/2419947?ost=2419947 should expose a serial interface on linux

Hey that’s amusing because I’ve been playing with exactly the same approach this week-end using two CH340 back-to-back, and have been seeking how to improve the process so that the baud rate would be irrelevant. What I’d like to do is not to have to guess the baud rate. In the end I could not find a reasonable microcontroller with two USB device ports, but thought that maybe chaining to V-USB stacks back-to-back with a synchronous protocol could be used to make this better. One problem with V-USB is that it presents as CDC-ACM and not as tty, and that… Read more »

Which makes it perfect for your specific requirement, assuming you can provide enough power.

I totally understand, what I mean is that for a *generic* solution getting a fixed baud rate is important. Of course, when you want to dedicate your console to a single machine you can write the port speed on it once for all. But tying two CH340 together is definitely something I’m doing from time to time for the reasons you mention. It’s not particularly needed to have a special cable for this, even though it comes completely packed, of course.

Does Radxa have a history of ensuring their devices work with mainline Linux?

I’m seeing this in 6.0.0, which I would say is a reasonably good indicator. They’re of course limited by the effort SoC vendors are willing to make, like all other vendors. But some such vendors are serious.

Will it be supported by OpenWRT? Could make a nice cheap but capable router!

If the DR900VX is the only solution available the ‘cheap’ solution is rather relative.
Atheros is known for good Wifi cards for AP’s, but with that cards the price doubles.

Atheros is long gone, they’re part of Qualcomm now, something that happened over 11 years ago.

Not really interested in turning this in a Wireless AP. I’m more into segmenting my network and a power-sipping firewall/router with 2.5GBe is what I’m looking for.

Even several Boards use additional 1gb controllers, making the speed not an argument.

Can you get more other peripherals that way, are the soc built-in eth controllers bad?

Looking for something with 2 gb eth ports and very low powerdraw, especially in idle .

Huh? Most SoC’s don’t have built in PHY’s for anything over 100 Mbps, hence why you get the “additional” controller as you put it. In this case, the SoC isn’t capable of doing 2.5 Gbps, so PCIe based Ethernet controllers are used.
Maybe read up on the capabilities of the SoC first, before making statements like this.
Very few SoCs support dual Gigabit Ethernet natively, unless it’s specifically a router SoC and even half of them don’t have native PHY’s, but rely on external chips, usually a switch for the LAN ports and another PHY for the WAN port.

I am specifically look for and was talking about rk3568 boards, which have two Ethernet controllers (MAC) built-in. Barely any will have PHYs built-in but that’s no real loss.
The soc would be perfect to plug in front of the router, I don’t need 2.5Gb.

AFAIK the only RK3568 device so far making use of both internal GMACs (paired with RealTek PHYs) is the R68S. But also two 2.5GbE controllers and no idea how much idle consumption could be saved by sending them completely offline.

Those RTL8125BG when having established a link show a difference of ~300mW idle consumption per NIC depending on whether it’s 2.5GbE or Gigabit.

In addition to the R68S reported by Thomas above, the ROC-RK3568PC-SE board that’s used in the StationPC-P2 seems to qualify: https://www.firefly.store/goods.php?id=174. It could be a good choice based on your description, especially if you take the complete machine with the enclosure, which is not cheap but not excessive either for a complete gigabit router: https://www.firefly.store/goods.php?id=147

Yeah, I know firefly.
Just want to know if there’s something wrong/bad with the inbuilt GMACs. I suppose its also a question of what ports are needed as SATA, GMAC and USB3 share the same pins and only one can be active.

SATA, PCIe Gen2 and USB3 are behind those Naneng Micro’s Combo PIPE PHYs but the GMACs utilize RGMII to be attached to external GbE PHYs.

You brought it up, but yeah. It’s the MMI connection between GMAC and PHY. I am not really concerned which encoding and modulation is used.

Point beeing the GMACs are each connected “off-chip” via a three way mux. For one mux you can either pick USB3 (respectively pcie2 depended on mux), or SATA, or GMAC to have a connection to the outside. The board engineer picks one of them.

The LinkStar H68K provides Ubuntu and OpenWRT 2 x 2,5-GBit/s- 2 x 1-GBit/s-Ethernet and is cheaper, wouldn’t it be a better option?

I don’t know, I was just trying to provide links for @Npl who said he didn’t need 2.5G and apparently didn’t need all the extra connectivity. All those solutions are good for some use cases, the user needs to choose at some point 🙂

same question as Ben, do you think it is possible to install OpenWRT on this little router to protect a home network ? Thank you.

Flippy-openwrt supports Radxa E25 with kernel 6.0, you can download it from:

Hello and thank you !