Here’s the back story before looking into the devices. I’ll soon have to review UP Xtreme i11 mini PC with a 2.5GbE port, and after writing about the upcoming ROCK5 Model B SBC with both 2.5GbE and WiFI 6/6E, I realized I should really get some hardware to test 2.5GHz and WiFi 6. So I started to ask what could be the best options for a $200 budget. While thinking about it, I remember Radxa was working on the Radxa E23 board with 2.5GbE, and adding a WiFi 6 USB dongle might be an option. But they told me Radxa E25 would be a better option with two 2.5GbE ports and support for WiFi 6, although that one is tricky because AX1800 dissipates 10W.

When I told them my main goal was to get hardware to test 2.5GbE and WiFi 6, Radxa just offered to send the same hardware there were using with the Mi AX3000 router and a 2.5GbE switch. An offer that’s hard to decline, so here we are… 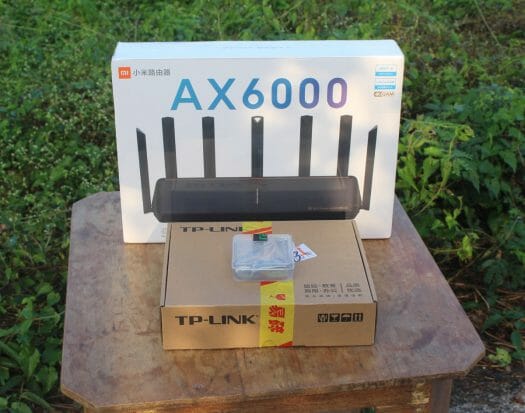 I even got an upgrade with a brand new Xiaomi AX6000 router. I’ll have a look. 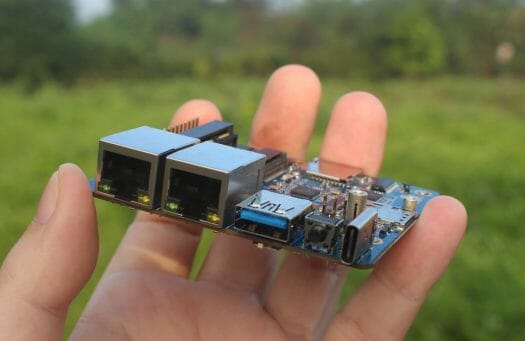 Radxa has not published the specifications yet on the wiki, just the schematics (for another board?) and CAD files, but are the preliminary Radxa E25 specs: 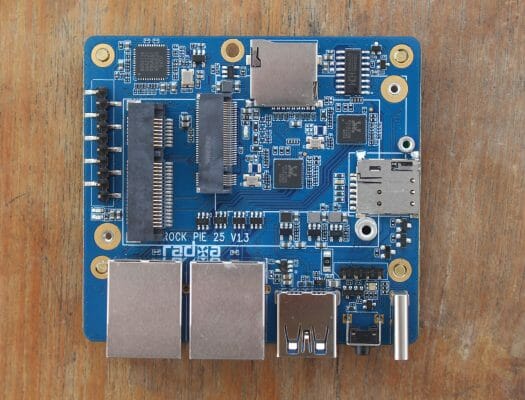 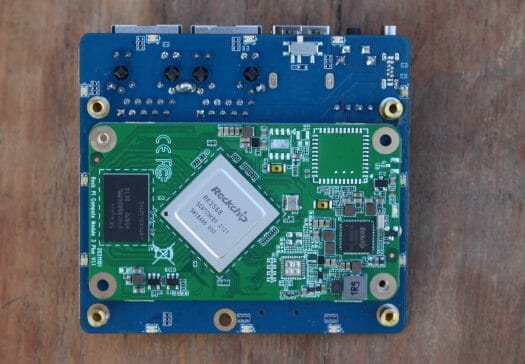 Radxa CM3 Plus may sound similar to the Radxa CM3 module, but it comes with a Rockchip RK3568 processor instead of RK3566, and is not compatible with the Raspberry Pi CM4 module, with different dimensions and four board-to-board connectors to allow for the extra I/Os from the processor. My module comes with 2GB LPDDR4 (SKHynix) and 16GB eMMC flash (FORESEE). 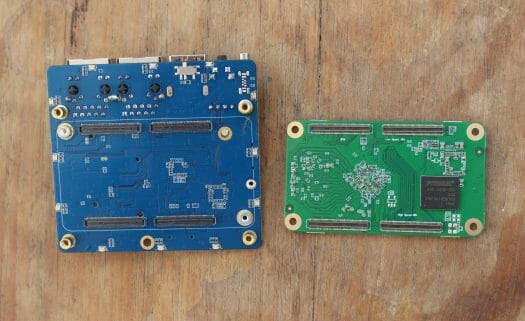 Radxa told CNX Software they are still working on the tooling for the heatsink and enclosure, and the board is basically ready, so we may get an official announcement in the next few months.

They envision the following use cases for the board/router:

They’ve tested WiFi 6 AX1800, but heat dissipation is currently being worked on. Debian and Ubuntu images are currently available for download for Radxa’s RK356x hardware platforms including E25. 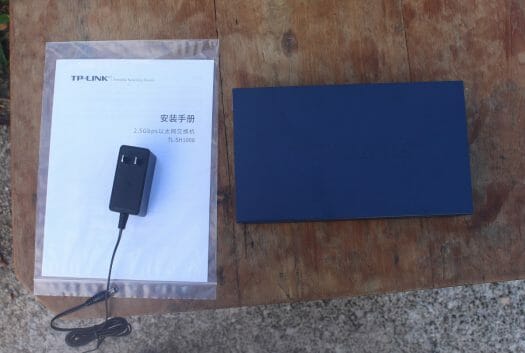 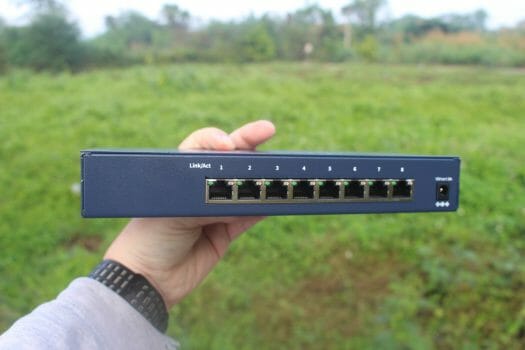 There are plenty of other 2.5GbE switches on Amazon, but this particular model can be found for about $115 on Aliexpress.

I had already written about Xiaomi Mi AX6000 WiFI 6 “Enhanced” router about a year ago, and you can find the specifications in that article, so let’s open the package. 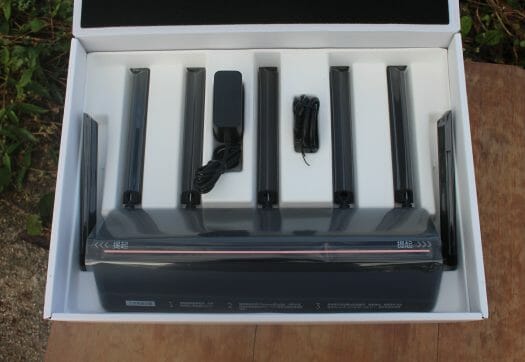 The router is neatly packed and ships with a 12V/2A power adapter and a Cat 5e cable. 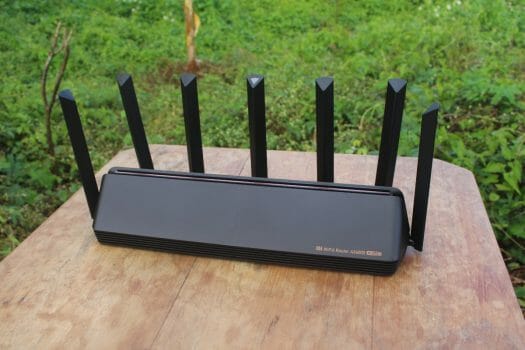 It looks pretty nice and more importantly, its 2.5GbE port can be used as either a LAN or WAN port. 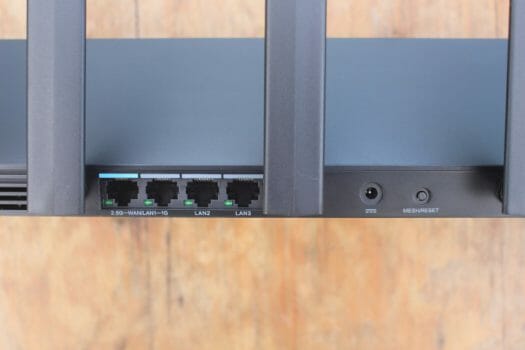 This will allow me to test WiFi 6 over the 2.5Gbps Ethernet connection, and with up to a 4808 Mbps WiFi 6 link should be able to handle most clients that will come to me for review without saturating the 2.5GbE interface. 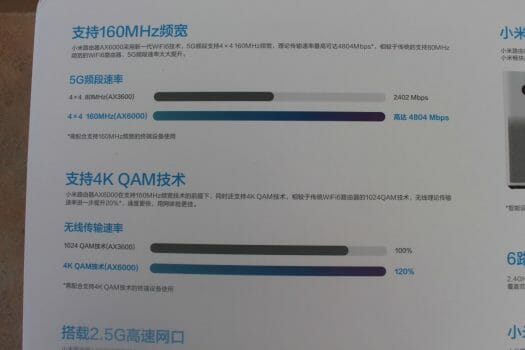 I don’t have any hardware with WiFi 6 just yet, so I intend to test 2.5 GbE first, except I don’t have any Ethernet cables around where I am right now, so it will have to wait a bit… 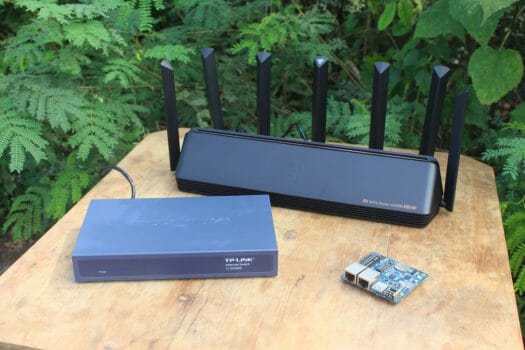 Xiaomi Mi AX6000 router sells for around $130 on sites like Aliexpress, so the complete setup with switch and router is about $250. In future reviews, I’ll probably end up using either Radxa E25 or UP Xtreme i11 connected to MINIX NEO S2 USB-C Dock with a 240GB SSD to test networking performance with iperf and SAMBA. Thanks again to Radxa for providing the hardware!

Their board looks really versatile. Among other use cases I’m seeing is the usual do-everything device that network consultants always need to have in their computer bag, to set up a temporary firewall, router, proxy, web server, network client, iperf endpoint, SSH/VPN gateway etc. The Clearfog and NanoPI R4S currently serve this purpose pretty well, and I’m seeing this as very nice new candidate as long as everything fits in a small metal enclosure.

Having RK3568’s multiplexing options in mind the single Gen2 PCIe lane could be either routed to the mPCIe or M.2 slot?

SATA could be present at both slots and maybe even at the USB3-A port if Radxa provides a funny cable adapter and this works with clock signals?

That “funny” cable adapter is against the USB-IF spec and could land companies in trouble, so I hope they didn’t implement that.
USB-C handles your other concern (assuming that’s the OTG port), so that’s not an issue any more, as the USB-A port can indeed not be OTG according to the USB-IF.

If I understand the multiplexing diagram right, then the SoC has only an USB2 OTG PHY (most probably connected to USB-C)?

OTG SuperSpeed should then work via the USB3-A port (there’s a switch directly below the socket ‘to select between USB 3.host and device mode’ as per the description above)

Missed that, so yeah, then they’re breaking the USB-IF rules.

CM3 Plus looks great, I’ve been waiting to see RK3568 in SoM form from someone reputable.

Only problem with a new RK3568 product is RK3588(S) being on the horizon (at last) – without a commitment to pin-pin compatibility (or a large price difference) I can’t see people wanting to invest time and resource into baseboards.

Crippled (i.e “cost optimised”) is no bad thing, assuming the saving is significant. RK3588S would suit my purposes perfectly (ICE), I have no need for pcie3.0 which is what most seem to take issue with. Onboard CAN is a nice bonus and perhaps gears this up to be a PX replacement – or to have another variant within that product line.

More antennas! More anntennas!!! My Mikrotik router has no ones… How I live with it?…

Remember HIFIs when they had huge cases and very tiny motherboards, but we bought them because of all the bright led displays and graphs.

Yeah, it has none because I guess it doesn’t have WiFi…
I guess you won’t be a fan of WiFi 7 based on your comment.
That said, they could’ve used a lot fewer antennas on this thing, if they’d used multi-band capable antennas, but they usually perform worse.

The board clearly has m.2 b-key slot, not m-key. That slot probably has SATA, USB & SIM routed to it. We’ll know for sure soon, when official specs are revealed.

A major pain about Xiaomi AX6000 is that it won’t work without an Internet connection.
Since I’m using a 4G LTE USB dongle, it needs another router connected to the WAN port…