The EsPiFF board may look like a Raspberry Pi 4 Linux SBC but it is equipped with an ESP32-WROVER WiFi and Bluetooth module together with a Raspberry Pi RP2040 microcontroller that acts as a co-processor.

The goal here is to provide a Raspberry Pi 4 replacement for applications that require higher reliability and even 24/7 operation without necessarily needing the processing power and multimedia capabilities of the Broadcom BCM2711 Arm processor found in the Pi or the versatility of a Linux operating system. 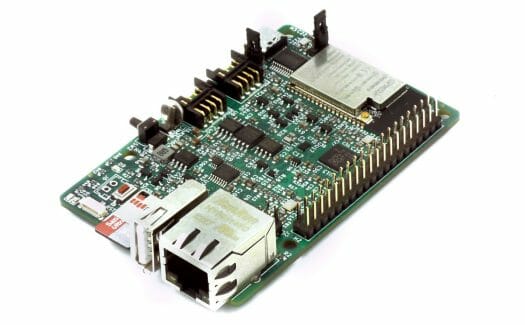 I can already see some readers raising their hands up in the air or doing a facepalm before starting to write a comment complaining about the placement of the ESP32-WROVER module on the board since it would interfere with the PCB antenna operation, but we were told it was to keep the Raspberry Pi form factor to be able to reuse existing Pi enclosures and an external u.FL antenna is included in the kit.

The ESP32 and RP2040 microcontrollers communicate over SPI or UART, and by default, the board comes with NuttX RTOS, which has recently graduated as a top-level Apache project, but you can program it with the ESP-IDF, Arduino, and other ESP32 development tools. The Raspberry Pi RP2040 runs the Firmata firmware that currently only supports UART communication, and SPI is being worked on. You’ll find more technical details on the Github repository for the board including the KiCad schematics and PCB layout, as well as the firmware source code.

Some use cases where the EsPiFF board may be better suited than the more powerful Raspberry Pi include human-machine interfaces, outdoor applications where the board can be housed in a water- or air-tight enclosure without worrying about overheating, home and industrial automation installations, and more.

MDC-Service Wittenburg GmbH has launched the EsPIFF board on Crowd Supply with a $2,250 goal. The only reward is the $55 EsPiFF with all required cables. Shipping adds $8 to the US, and $18 to the rest of the world, and backers should expect their perks to ship in April 2023.

At least it has the option of using an external antenna via u.FL connector.