Qualcomm unveiled the Snapdragon 8 Gen 2 mobile platform just a few days ago, but Linaro has just announced that Linux was already upstreamed to the premium mobile SoC featuring a 3.2 GHz Arm Cortex-X3 “Prime” core, four performance cores at up to 2.8 GHz, and three Efficiency cores clocked at up to 2.0 GHz.

Most of the work was done by Linaro Engineers Abel Vesa and Neil Armstrong with initial support posted on November 16th on the Linux kernel mailing list, and with the set of patches released so far, it is even possible to boot a minimal AOSP image on a Snapdragon 8 Gen 2 development kit shown below which should be manufactured by Lantronix, if history is any guide. 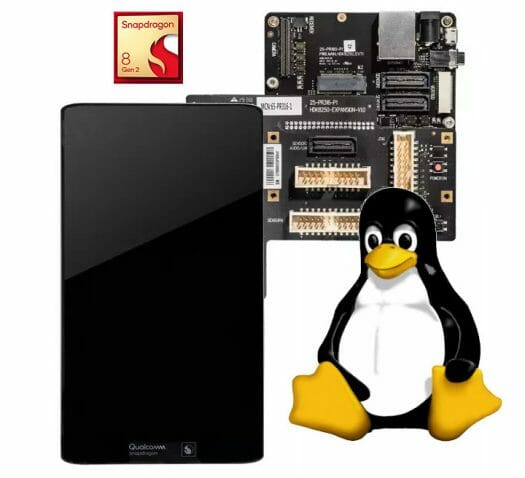 The following features are enabled in mainline Linux for the Qualcomm 8 Gen 2 processor, codenamed SM8550:

Code development for upstreaming the Linux kernel for the SM8550 can also be followed on the CodeLinaro website where you’ll get the patch sets and source code. Linaro is now working on implementing support display, audio, and modem use cases.

In the announcement on the Linaro blog, Neil Amstrong further provides instructions explaining how to build a minimal AOSP image from scratch, and run it on the Snapdragon 8 Gen 2 development kit which does not seem to be available to the general public just yet. Lantronix would typically announce such a hardware development platform a couple of months after the processor is unveiled just like they did for the Snapdragon 888 Mobile Development Kit for instance. Most of that work is done on behalf of Qualcomm with a focus on Android, but that could also make Linux easier to port on recent Qualcomm Snapdragon hardware.

Great. If SoC vendors start to understand that upstreaming early costs less by having less work to do over time (less rebasing etc) and helps collect more structured feedback, maybe we can hope for a better situation in the ARM world over the long term.

And maybe the precedent will help encourage RISC-V vendors do the right thing as well.

yeah, really hope others step up! because, knowing history, getting this soc in a sbc ain’t going to happen before 2030…$

hopefuly i’m wrong, and now that they have mainline linux support, someone will bother making a snapdragon sbc!

This is the one that finally adds AV1 decode.

How many lanes of pcie3?

According to upstreamed commits it’s Gen3 x2 and Gen4 x2.

Which YouTube channel does reviews about Lantronix products?
Because are very interesting and powerful sbc (unfortunately expensive) but ETA doesn’t like Explaining C. or others that I follow.

Not really sure what you’re looking for, and I couldn’t parse your second sentence at all.

He was trying to say that ETA Prime, Explaining Computers, and other YouTube channels that review single board computers do not review Lantronix products.

Which is not a surprise, since they are clearly not priced for consumers or hobbyists. The Snapdragon 888 Mobile Development Kit was $1349+.

Well, there are a few links above in the article, it’s getting concerning if some people can’t read them and need someone else to do it for them on youtube :-/

Does this mean we have good prospects for postmarketOS on snapdragon 8xx soon-ish?