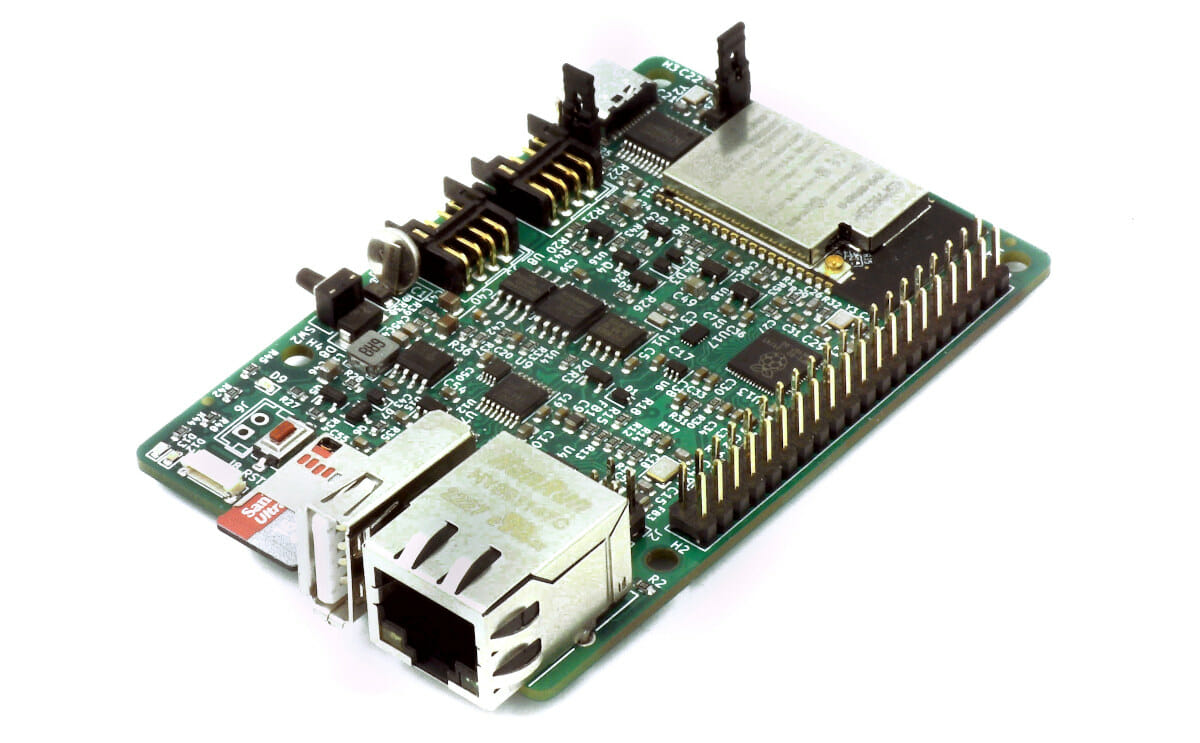 The EsPiFF board may look like a Raspberry Pi 4 Linux SBC but it is equipped with an ESP32-WROVER WiFi and Bluetooth module together with a Raspberry Pi RP2040 microcontroller that acts as a co-processor. The goal here is to provide a Raspberry Pi 4 replacement for applications that require higher reliability and even 24/7 operation without necessarily needing the processing power and multimedia capabilities of the Broadcom BCM2711 Arm processor found in the Pi or the versatility of a Linux operating system. EsPiFF board specifications: Wireless module – ESP32-WROVER module with dual-core ESP32-D0WDQ6 microcontroller with 2.4 GHz WiFi 4 and Bluetooth, 8 MB PSRAM and 16 MB flash Co-processor – Raspberry Pi RP2040 dual-core Cortex-M0+ microcontroller @ up to 133 MHz with 16MB flash used to emulate the Raspberry Pi’s GPIOs on the 40-pin header Additional storage 2 KB of fast FRAM for permanent storage of process data. (faster […] 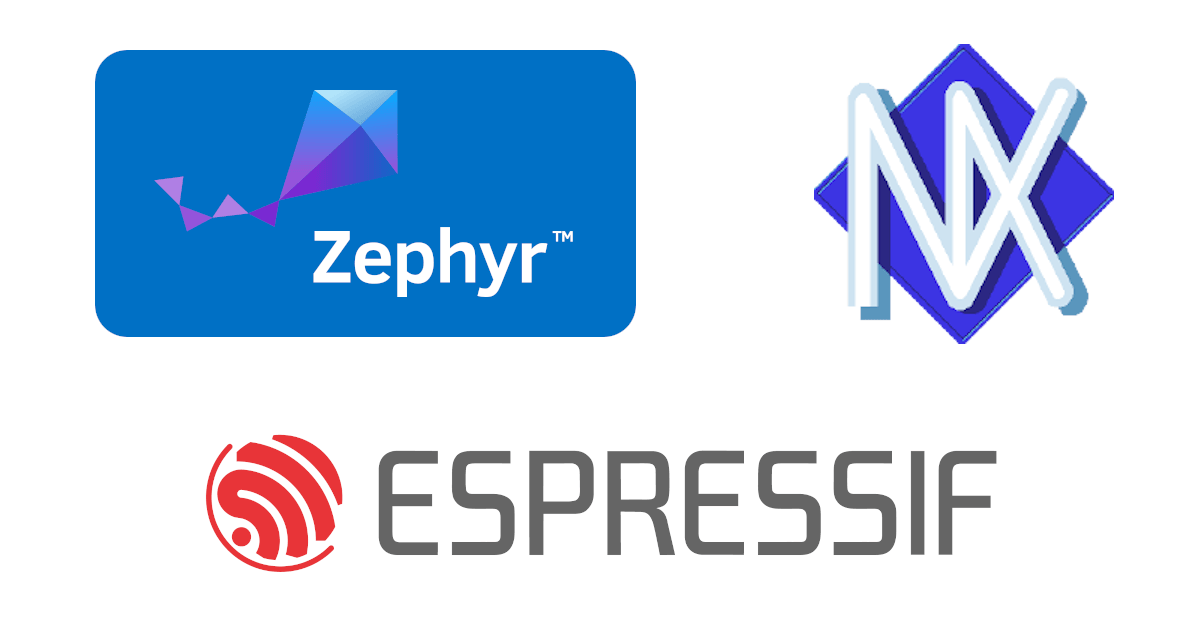 Espressif has recently announced that both Zephyr and NuttX open-source real-time operating systems had gotten official support for the ESP32 series of WiSoCs. It’s been a long time in the making, and when I first tried the community developer port of Zephyr OS on ESP32 in 2018 it did not work well at all, and I could not even make the blink LED sample work on Wemos Lolin32 board, and the WiFi sample would not even build. But time has passed, Espressif Systems started to officially work on Zephyr in 2020, and now I/Os, WiFi, and some other features work on Zephyr and NuttX RTOSes. Zephyr on ESP32 We first wrote about the Zephyr Project in 2016 describing the OS as follows: Zephyr Project is a lightweight real-time operating system (RTOS) designed for IoT applications and comprised of a microkernel for lower priority tasks, as well as a nanokernel to […] 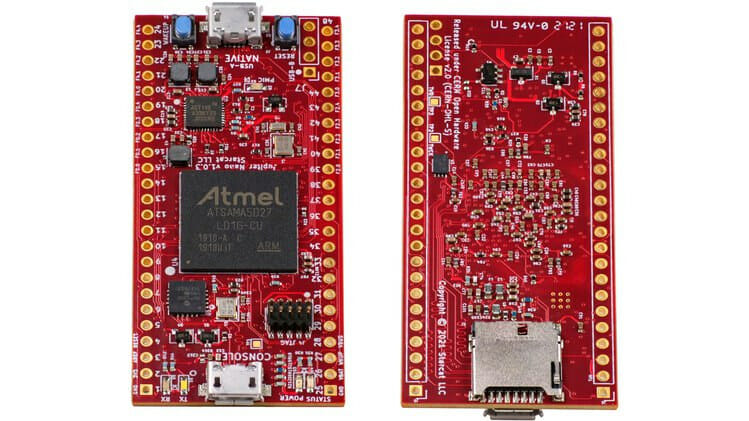 Jupiter Nano looks like one of those small MCU boards, but instead of a microcontroller, it packs a 500 MHz Microchip SAMA5 Cortex-A5 processor with 128MB RAM capable of running Linux or NuttX operating systems. The board reminds me of the Adafruit Feather compatible Giant Board made by Groboards, with the same system-in-package, but Juniper Nano offers more I/Os via 48 through holes, and its size is said to be similar to Teensy 4.1 board (but not quite). Jupiter Nano specifications: SiP – Microchip SAMA5D27C-LD1G with Cortex-A5 processor running at 498 MHz, 128MB LPDDR2 DRAM Storage – MicroSD card socket (bootable) USB – 1x Micro USB 2.0 host/device port, 1x USB 2.0 host on header Expansion – 2x 24-pin headers with GPIOs, USB, SPI, I2C, up to 4x Flexcom interfaces configurable as SPI, UART or I2C Programming – JTAG port, Micro USB 2.0 FS debug console via MCP2200 USB-UART converter […] 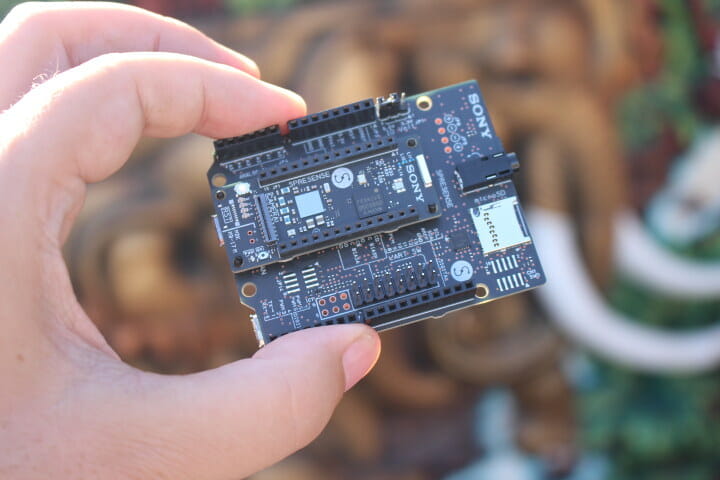 Sony Spresense Arduino compatible board with audio and global navigation satellite systems (GNSS) support and its extension board launched in Japan this summer. The company has now expanded markets, and is offering the boards in the United States and Europe as well. They also tasked an agency to send samples to various reviewers, and I got selected to receive one as well. I’ll start the review by checking out the hardware, shortly discuss software development options, and report my experience with Spresense SDK. Sony Spresense Unboxing I received two packages… … one the main board, and the other for the extension board. The main board package only comes with CXD5602PWBMAIN1 board and an information sheet. The top of the board includes a reset button, four user LEDs, a power LED, a boot recovery button, the camera interface, Sony CXD5247 power management and audio analog interface chip (Black on the photo below, […] 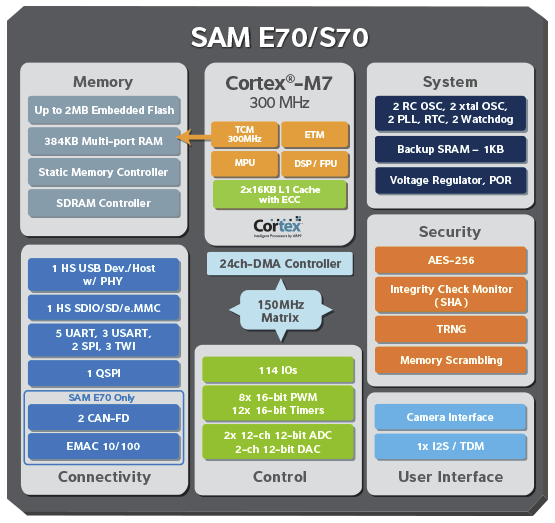 ARM Introduced Cortex M7 IP in September, and ST Micro simultaneously announced its STM32F7 Cortex M7 MCU clocked up to 200 MHz, and boards are now available, including some running Linux. But two other companies have licenses Cortex M7, Freescale with its Kinetis KV5x micro-controllers which are yet to be mass-produced, and Atmel which has recently announced their SAM S70 and E70 micro-controllers are now in mass production. SAM E70 and S70 have similar features, but E70 offers some extra interface like CAN and Fast Ethernet: ARM Cortex-M7 core running at up to 300MHz (1500 CoreMark) Up to 2MB Flash and 384kByte SRAM Floating point unit (FPU) for high-precision computing and accelerated data processing High-performance internal memory architecture with user configurable Tightly Couples Memories and System memory, and 16kB I and D-cache High Speed USB Host and Device with on-chip high-speed PHY CMOS image sensor interface AES hardware encryption engines, […] 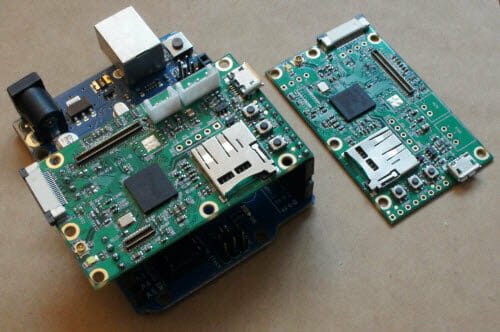 Andrew Huang (Bunnie), an hardware engineer, known for hacking the original XBOX, and more recently for Novena open source laptop, has decided it could be interesting to reverse-engineer Mediatek MT6260 processor, as in China, it’s difficult to get documentation, SDK, and tools if you don’t commit to purchase X chips, where X is a rather large number. He and others also checked whether their work could be open sourced legally, and assert their “fair use” rights to reverse-engineer hardware and firmware. And so Fernvale project was born both as a technical challenge and to make a point. MT6260 is a $3 ARM7EJ-S processor clocked at 364 MHz with 8MB built-in RAM, interfaces such as I2C, SPI, PWM, UART, as well as LCD and touchscheen controller, and audio codec, battery charger, USB,  Bluetooth, and GSM support, which make the $6 Atmel MCU used in Arduino board look expensive. The main differences […]