SB Components is running another crowdfunding campaign with the EnkPi ePaper display powered by a Raspberry Pi Pico W board and offered in four different sizes namely 2.9-inch, 4.2-inch 5.83-inch, and 7.5-inch.

Each mainboard also comes with a USB Type-C port, a microSD card socket, an RTC with a backup battery holder, a buzzer, six user buttons, and a JST connector for expansion with GPIO, I2C, UART, and ADC signals. 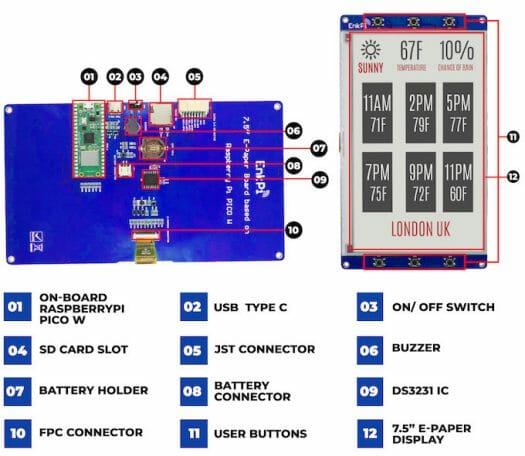 The Raspberry Pi Pico W can be programmed with the usual C/C++ or MicroPython SDKs, and SB Components promises to release all board files and software at the end of the Kickstarter campaign on their GitHub account as they usually do. It’s not the first Raspberry Pi RP2040-based ePaper design we’ve seen as Pimoroni introduced the Badger 2040 programmable E-Ink display earlier this year.

The EnkPi has the advantage of providing WiFi connectivity and offering four sizes for their tricolor ePaper displays, but we’ve written about wireless ePaper displays based on ESP32 including the Inkplate 2 which we covered last week, and several ESP32 ePaper “TTGO” displays by LilyGO introduced over the last few years.

SB Components launched the EnkPi ePaper displays with a Raspberry Pi Pico W board on Kickstarter and raised a little over $4,000 so far. Rewards start at $49 for the 2.9-inch model and go up to $98 for the 7.5-inch display. I understand the Raspberry Pi Pico W board is soldered to the EnkPi board in all perks. There’s also a universal e-Paper HAT to connect a Pico board and an ePaper display of your choice that goes for $10. Shipping is scheduled to start in March 2023.

Yawn, give us something we can’t get 3x cheaper by rooting a kindle. Give us a 12 inch or better yet 14 inch e-ink display. Build it and we will come.