Most touchscreen displays aimed to be connected to a development board work through a display interface such as MIPI DSI or LCD RGB (and USB or I2C for touch support), and come with somewhat low resolution such as 800×480 which can be suitable for HMI applications. They also often don’t work with all boards due to the different interfaces used, and there’s no way to easily connect such small display to your computer. Taking those limitations into account, and since most boards and computers come with HDMI and USB ports, Elias Bakken and his team have added HDMI and USB ports to two smartphone displays, and Manga Screen 2 was born. 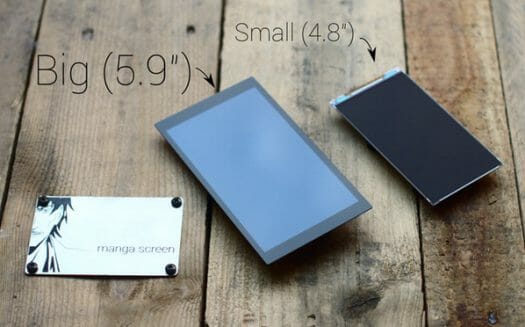 The two displays – made by Sharp – have the following hardware specifications:

They added the electronics to convert HDMI signals to whatever interface the displays use, and a micro USB port for power and the touch screen interface. So those should pretty much be play and plug, and work with Raspberry Pi, ODROID, BeagleBone Black and other boards, as well as your computer, laptop, etc… 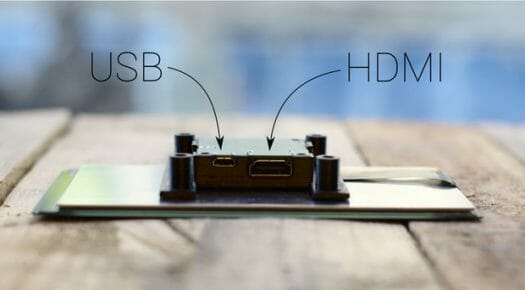 Potential projects include home automation interface, standalone Spotify player, pet food dispenser, 3D printer interface, and any project that may benefit from a ~5″ touchscreen display. The promo video demonstrates some of those applications.

I have backed the first breed of Manga Screens back in the day 😉
Elias, the creator is a very nice guy who puts in alot of effort into making it a top notch product while being on time for the expected delivery!

And, he opensourced everything… it took a little bit of time to have a decent wiki page around it, but it’s done and clean, no doubt these ones will be just as good !

Well, then, I think I might back this one with the understanding that it still might not make. These things have unbelieveable specs and promise higher end function in a small package.

So on the conservative end, you’re saving 20% through Kickstarter.

Yeah, that’s not enough of a discount for me to bite. KS projects are universally late, and many have failed to even ship a final product. 20% discount is not enough to assume the risk.

Heh. I’ll bite- you’re not BUYING the thing. You’re VC-ing the thing, with the plus of a possible unit in return as the “interest” you got for your funding.

Once you understand this, and with a previous success (past performance does not fully indicate success- but in this case, it is a good sign…), it’s worth venturing around $100. If you don’t…or enough doesn’t…you may not get the device…ever.

I’m okay with investing with the possibility of nada. It can be written off of Taxes in the US.

One of the things people need to **QUIT** doing is acting like you’re buying with a “discount” and the like with Kickstarter and Indegogo. You’re **INVESTING**. There is a difference.