DshanMCU Pitaya Lite is an MCU development board based on yet another STM32 alternative: MindMotion MM32 Arm Cortex-M3 microcontroller that is said to be compatible with STM32.

The MCU can be clocked at up to 120 MHz, embeds 128KB SRAM, 512KB flash, and the board offers two USB Type-C ports for USB and DAP debugging, a MicroSD card slot, a few buttons, I/Os are routed via through holes as well as a mini PCIe connector that can be used to connect a display. 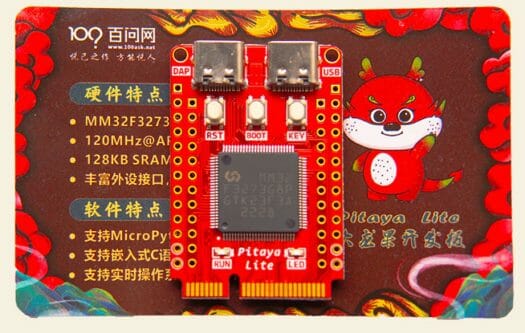 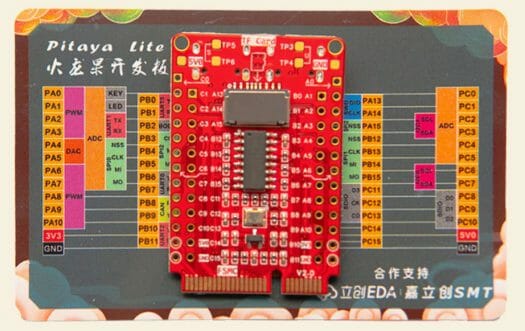 DongShanPi says the board and MM32 microcontroller can run MicroPython-1.16 firmware, as well as FreeRTOS and RT-Thread real-time operating system. There’s plenty of documentation on GitHub, albeit mostly in Chinese, with some hardware design files (PDF schematics), 3D files, developer guides for MicroPython, “embedded C”, and real-time operating systems, and datasheets (here’s the one in English!). The MM32F3273G8P microcontroller is also listed on the Keil website since it should be supported by the Keil MDK 5 IDE.

The Pitaya Lite MM32 board can be purchased for $4.04 on Aliexpress, and a bundle of 5 “MM32F303” microcontrollers is also offered on the same page for $14.42. This exact chip can also be found on LCSC for $3.48. The Pitaya Lite board sold on Aliexpress comes with the card shown in the photo, but the documentation appears to show a bundle with cables, a microSD card, a card reader and some male headers that may be available in mainland China. 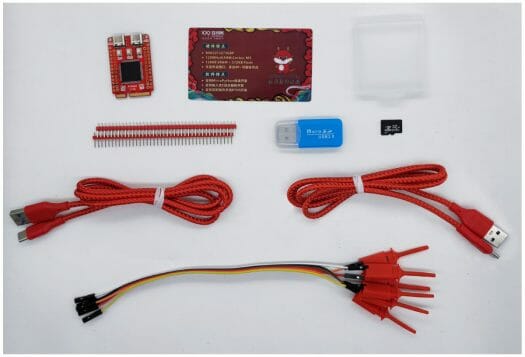 Is this character showing me the middle finger, or is it just weirdly smiling?

On inspection the character has on its left hand, only two stumps/fingers/nails showing. Which of the two, are you recognizing as the middle one?

Question for technical people, can this device run on battery power. If yes what size, type of battery ( smallest possible preferred ) would allow 8 hours constant user, use?

Thank you if anybody replies.

There isnt a correct answer for this, because the power usage can vary a lot depending on what you’re doing, the components on the PCB and how optimized it is the application.

But the MCU by itself doesnt use all that much power, so most small batteries could last for 8h just fine.

I’ve never heard of Dap-Link, is that a new Arm debugging interface, similar to JTAG, SWD?

Do you need a special programming adapter? I don’t see it listed in Keil.

With the name Pitaya Lite, people are bound to associate this with the Red Pitaya. However, it has no FPGA, no ADC (or DAC), and lacks Ethernet support. The only thing in common is the 120MHz clock.
If it had even a small FPGA, or CPLD, they could play up the name.