ARM Introduced Cortex M7 IP in September, and ST Micro simultaneously announced its STM32F7 Cortex M7 MCU clocked up to 200 MHz, and boards are now available, including some running Linux. But two other companies have licenses Cortex M7, Freescale with its Kinetis KV5x micro-controllers which are yet to be mass-produced, and Atmel which has recently announced their SAM S70 and E70 micro-controllers are now in mass production. 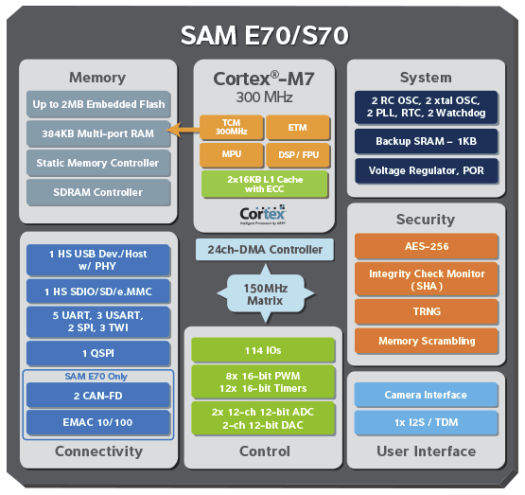 SAM E70 and S70 have similar features, but E70 offers some extra interface like CAN and Fast Ethernet:

Atmel actually has four families of Cortex M7 MCUs, but their automotive grade V70 and V71 MCUs are not mass-produced yet.

However since S70, E70, and V70 are all subset of SAM V71, the development platform “SAM V71 Xplained Ultra Evaluation Kit” (Codename: ATSAMV71-XULT) is powered by the top of the line ATSAMV71Q21 micro-controller with 2MB flash, 384KB SRAM and all peripherals available on Cortex M7 microcontrollers. 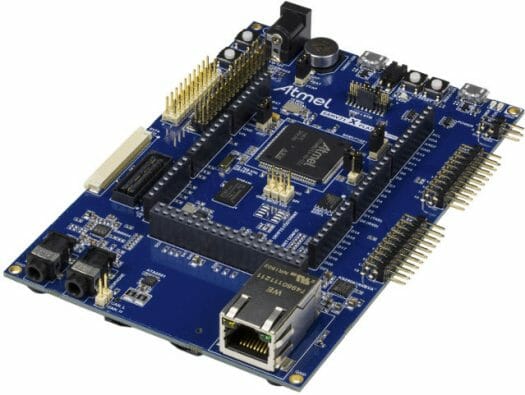 Software development tools include Atmel Studio, the ARM Keil MDK-ARM and IAR Embedded Workbench, and the MCUs and board support various real-time operating system such as Express Logic ThreadX, FreeRTOS, Keil RTX, NuttX and Segger embOS. Charbax interviewed Atmel a little ago while they were showcasing the Cortex M7 Xplained board at Embedded World.

I like these m4 and m7 arm chips with fast gpios. But for my needs the ram size is just too small. I would need at least 512kbytes of ram. On the other hand the flash size coud be much smaller (256kb is more than enough for me). For my project I had to resort to BBB and their PRUs which is more expensive hardware unfortunately.

@olin
You can also connect DRAM to the Atmel Cortex M7 MCU since they have an SDRAM controller.
The Xplained board has 2MB SDRAM + 384 KB on-chip RAM.

@olin
If you want lots of on-chip RAM at an affordable price, there aren’t too many options; probably the best option are the NXP/Freescale Vybrid MCUs (some models have 1.5M RAM, don’t remember if they have flash). PIC32MZ series IIRC also has 512K, but the original models have lots of errata.