There was a time when development boards were really hard to get for individuals with companies not wanting to waste their time with hobbyists, but the maker revolution changed all that, and now many companies want to get involved in “open source” board for the developer’s community. The latest board trying to emulate the Raspberry Pi is GoWarrior Tiger powered by ALi M3733 dual core cortex A9 processor with 1GB RAM, 4GB Flash, Ethernet and WiFi, HDMI and AV output, and two 40-pin expansion headers. 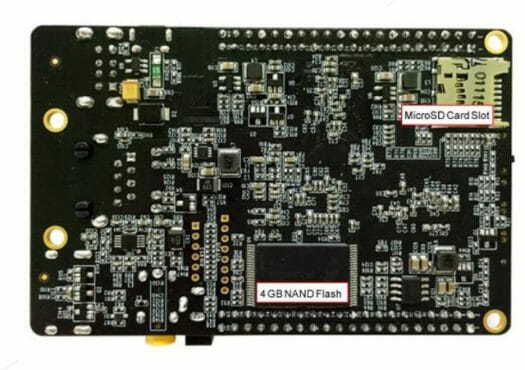 The company plans to provide at least three operating systems for the board with GoDroid (Android), GoBian (Debian), and GoTDS (FreeRTOS), but so far only GoDroid is available for download, and there are some repositories on GoWarrior’s github account related to GoBian. All documentation is currently only available for GoDroid, and you can also find some hardware design files such as the schematics (PDF only), PCB layout (.pcb), system reference manual, datasheet and so on. So documentation appears to be decent for the hardware and Android, and they also have Chinese and English forums for support.

The board used to be available on eBay for $79 shipped, but it can only be found on Taobao right now for 399 CNY (~$62). More details can be found on GoWarrior community website.

Note that that is most likely 4Gbits worth of NAND flash, in other words, 512MB, not 4GByte.

Emm maybe I’m missing something but why is this so damn expensive ?

@Marius Cirsta
I told them it looked a bit expensive for this feature set.
Somewhat similar to Orange Pi 2 for $32 + 4GB NAND flash.

@Jean-Luc Aufranc (CNXSoft)
Well given the price of the pine64 even $40 is too much. For $40 I can get a 2GB, quad core ARM64 with not flash , sure but $5 gets you a decent SD card so …. Not to mention that the sunxi community and all that … so I’m not really sure who this one is for.

But you’re right that if sunxi community gets involved on Pine64 project, it will greatly help with software. Olimex is also on-board with their laptop project based on A64.

@Jean-Luc Aufranc (CNXSoft)
I guess we’re spoiled these days…. I wouldn’t buy any board that’s not 64bit unless it’s really cheap or a Rpi. I just bought a Rpi 2 because it has really good support and there’s the promise of an open source GPU driver which is not something you can easily get for an ARM board.

@Jean-Luc Aufranc (CNXSoft)
That’s quite surprising and partially explains the high cost, as RAW NAND at that kind of size is not that cheap and it’s not something I expected to see on an oddball board like this. Why not simply use eMMC, as it’s far more reliable and about the same cost?

It only makes sense investing in this if you’re going to build a STB based on the ALi chipset, otherwise I’d say you’re wasting your money.