Hackerboards.com single board computer database has been around for several years starting as Board-DB, but I noticed another one called FindBoard while browsing on Aliexpress with some more exotic boards.

Hackerboards’ database currently features 467 SBCs and MCU boards, while FindBoard has 453 boards. There are some overlaps, but also boards that are not found in the first database. 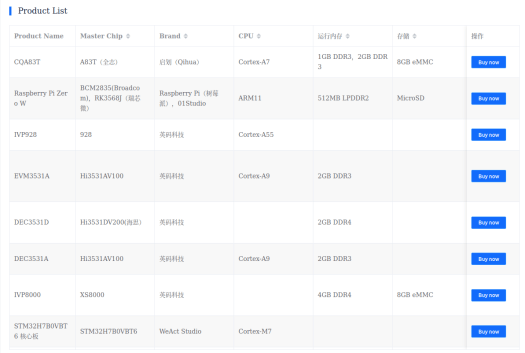 Many of the boards on FindBoard are Linux-capable, but they are also some microcontroller boards as we can see from the screenshot above. If Chinese is selected, the “Buy now” will redirect you to Taobao, and if it is English they will be a link to an Aliexpress page.

There’s a parametric search function for FinderBoard single board computer database but it’s really only useful when selecting one single parameter because the system use “OR” instead of “AND”. So if select 01Studio and Linux as above, it will show results for 01Studio or Linux. There’s no option to let visitors submit new boards, so we have to rely on the maintainer who appears to be an Aliexpress seller.

Some of the brands I’ve never heard of include 01Studio, Cosofteck, Yahooom (亚博智能), Alientek (正点原子), and a few others. The site also reminded me that I previously wrote about Qihua and 9tripod products. Most people should probably stay away from those due to software support and the language barrier, but it might still be interesting to some.

What I really miss is a site with descriptions of the SDK/Software support of such boards.

Specially on those claiming to boot linux. Most of the time you get an ugly image with some random old kernel version, etc, and is literally a nightmare to really know if peripherals are properly supported in the kernel, what to expect in terms of distros/sdks (yocto? buildroot?)

It’s close to impossible because contrary to hardware that is pretty much fixed except for infrequent board revisions, software support evolves on a regular basis and it would be close to impossible to maintain such a website with reliable and up-to-date information. The sunxi community is maintaining a list of their Linux mainlining efforts for Allwinner processors: https://linux-sunxi.org/Linux_mainlining_effort Rockchip has a status matrix for some of its processors: https://opensource.rock-chips.com/wiki_Status_Matrix But it does not look like it is updated anymore. That’s only for the Linux kernel, and then there are different distributions, configurations, and so on. The use case is also… Read more »

Well, obviously maintaining a comprehensive table related to software is almost impossible. But at least mentioning what is supported and what is missing in the kernel for a given processor would help a lot.

Caveat emptor: There’s some inconveniently missing entries like how there’s category for the Tensilica Xtensa LX6 MCUs but none for the 32bit RISC-V MCUs even when they have the ESP32 products listed for each.

Otherwise, Nice to have. Thanks!

Not a database, but Digikey has a PDF with a list of 50 SBCs that comes along with an augmented reality app that won’t load on my phone.
https://www.digikey.com/en/maker/resources/boards-guide