Since you can’t always rely on single board computer (SBC) vendors to provide a case to match your needs, some went the DIY route. Willy Tarreau designed some laser-cut enclosures with Inkscape for various SBCs, while hominoids went a step further by developing the “SBC Case Builder” tool to automatically generate various types of 3D printable enclosures using OpenSCAD.

All cases are available in Inkscape SVG format, and Willy accepts contributions for other boards. You’ll need a laser engraver or CNC router to cut out those enclosures.

Hominoids’ SBC Case Builder project attempt to automatize enclosure generation for SBCs using SBC Model Framework written in OpenSCAD. Work has focused on ODROID boards so far, but it should work for other vendors too. The parameters are defined in a configuration file:

This allows you to select the thickness of the walls, opening for the GPIO header, type of cooling, and other parameters to create a custom enclosure. The tool will also validated the design to make sure the board can indeed fit inside. 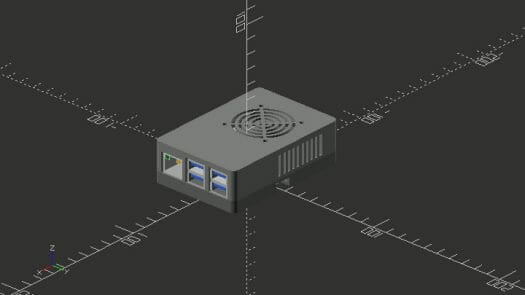 Once the files have been generated, the design can be 3D printed. Alternatively, it might also be possible to use a CNC machine:

I believe most if not all of them can be cut on a 3-axis CNC, maybe even on a 2 ½ axis CNC. The flat ones are doable and the others might need multiple setups but should also work, imo. I’m somewhat limited in my design because they are being produced for a 3D printer so having a mill should expand what you could do and open up better aesthetic design choices too, imo.

Here are some of the 3D printed enclosures created with SBC Case Builder utility.

More details can be found on odroid forum. There may be a steep learning curve before being able to use to tool to good effect since there are so many options, and models would have to be created for other single board computers.

Open scad is great, i use it for all my 3D designs, you can easily create parametrized stuff like this box

Oh that’s very interesting! I don’t know OpenSCAD, but being able to parametrize stuff like this is awesome. For example in inkscape it’s very hard to set the values you measured, you constantly have to adjust your settings when entering positions, by subtracting a radius and line thickness in your head. It’s obviously not designed to be used like this but for now I hadn’t found better. Maybe the learning curve of this OpenSCAD is a worthy effort compared to the pain of doing it in inkscape. I’ll have to have a look.

Parametrizing constraints is also there in GUI CADs like FreeCAD, Fusion360 and, my personal favorite, SolveSpace. What sets OpenSCAD apart is that you can program logic around the constraints in unconventional ways since it’s all code. The tradeoff is that you lose the convenience of GUI editing. So, unless your project calls for frequent, variable-based changes, you won’t be as productive (as in, fast) with OpenSCAD as you can be with a GUI CAD. This project is a good example of where OpenSCAD is useful. But don’t be the guy that writes their letters in LaTeX… Use the right tool… Read more »

One of the goals of SBC Case Builder is to abstract away the underlying OpenSCAD so anyone can customize one of several standard case designs across a multitude of SBC without having to know OpenSCAD. This is accomplished by using a text configuration file and adding or subtracting accessories to the case. The SBC Model Framework can support other SBC and micro-controllers and works in a similar manner, through a text configuration file with an entry that defines the SBC and it’s components. Pull requests for new SBC and micro-controllers are welcome and appreciated. Once added, they should work with… Read more »

Yes, Openscad is really interesting and you can test it in your browser looking at jscad: https://github.com/jscad/OpenJSCAD.org formerly known as openjscad.

Wondering, if You’ve ever been trying to solder small components with a navigated/positioned laser beam, checked by mounted cam or microscope, so one could concentrate on positioning components?

You always ask the strangest question 🙂

sure, but i learned, industry is copying our low level approaches instantly 🙂
https://youtu.be/vuQLbCMaC9Y?t=25