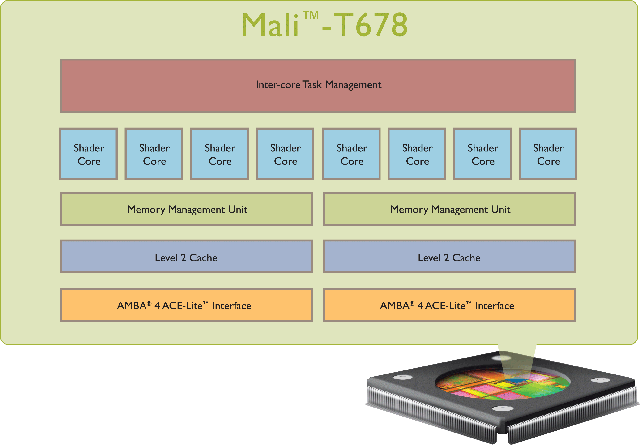 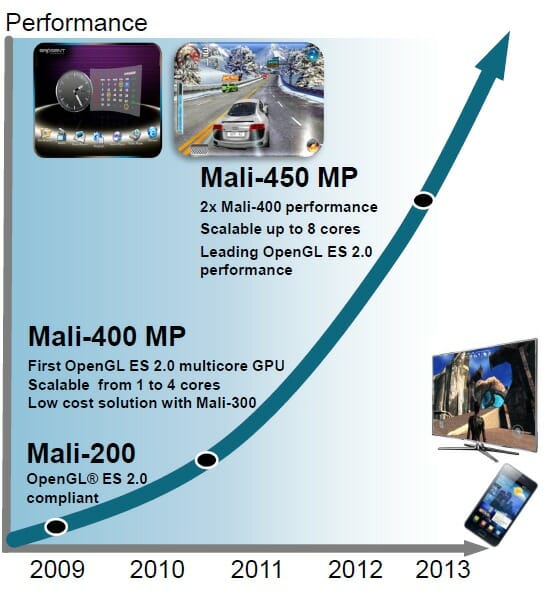 EETimes reports that ARM has shown details about its new GPU, the Mali-T450, which offers up to twice the performance of the Mali-400 and can be scaled up to 8 cores, whereas Mali-400 can only be scaled up to 4 cores. The Mali-450 (codename Tyr) targets entry-level and mid-range mobile devices, and is said to be software compatible with Mali-400. ARM new GPU has also been “tweaked” to provide better performance at the cost of occupying a slightly larger area. The company recommends the use Mali-400 for 1 to 4 cores configuration and Mali-450 for 5 to 8 cores configuration for higher end products. Contrary to Mali-T604 and Mali-T685 GPU, Mali-450 does not support general purpose computing on GPU (GPGPU). ARM is also working on a new GPU codenamed Skrymir based on Midgard architecture (Like Mali-T604 & T658) that should be available in 2014. Source: EETimes Jean-Luc Aufranc (CNXSoft)Jean-Luc started […]

Luc Verhaegen, the lead developer of LIMA open source project, provided an update at LinuxTag 2012 last week-end. This open-source MALI GPU driver isn’t ready for consumers yet, but the LIMA team has made some progress and showcased an OpenGL ES demos running on a Chinese tablet running Android. Luc said the tablet used for the demo is the same hardware as the Spark KDE/Vivaldi tablet, so the video demo below must be running on an AMLogic 8726-M processor with a Mali 400 GPU. The drivers already (partially) work on both Mali-200 and Mali-400 GPUs. The fragment shader instructions set is fully known and they have disassembler and assembler fully implement, but they still need to work on the compiler. The vertex shader instruction set is 80% known, they have a simple shader disassembler and are working on the assembler. You can also watch the 40 minute presentation at LinuxTag […]

Linus Torvalds has just announced the release of Linux Kernel 3.4 on the 20th of May: I just pushed out the 3.4 release. Nothing really exciting happened since -rc7, although the workaround for a linker bug on x86 is larger than I’d have liked at this stage, and sticks out like a sore thumb in the diffstat. That said, it’s not like even that patch was really all that scary. In fact, I think the 3.4 release cycle as a whole has been fairly calm. Sure, I always wish for the -rc’s to calm down more quickly than they ever seem to do, but I think on the whole we didn’t have any big disruptive events, which is just how I like it. Let’s hope the 3.5 merge window is a calm one too. Linus Linux 3.3 merged Android drivers to mainline, added further improvements to btrfs and ext-4 file […]

Ziilabs released comparative GPU compute benchmark results for its ZMS-40 stem cells processor and made available its MandelMark floating point benchmark for Android 4.0 as an apk file. Since Ziilabs is using its own benchmark tool, which they released as a binary but did not open source, the results should be taken with a grain of salt. GPU Compute (aka GPGPU – General Purpose computing on GPU) is a technique to use the GPU to perform complex calculations usually performed by the CPU. MandelMark benchmark visualizes the solutions to the Mandelbrot to measure the floating point performance of mobile processors. Ziilabs compared their ZMS-40 Quad Core Cortex A9 processor with 96 stemcell cores to the following competitors: IPAD 3 – Apple A5X processor with a quad-core PowerVR SGX543MP4 GPU Galaxy Tab 7+ – Samsung Exynos 4210 processor with a quad-core ARM Mali-400 GPU Galaxy Nexus – TI OMAP 4460 processor […]

Zach Pfeffer, Android Platform Lead at Linaro, talks about (GPU) Binary Blobs and the problems they cause at Embedded Linux Conference 2012. Abstract: Binary Blobs Attack!!! Most SoC vendors distribute binary blobs with Linux kernel shims. These binary blobs enable graphics engines, DSPs and other cores on ARM and other architecture SoCs. These binary blobs tend to be tied to specific kernel versions which limits unreadability and hackability and complicates device manufactures, which slows down innovation and the introduction of new and unique computing devices. Here’s what I noted from this presentation: Most of the issues at Linaro come from (GPU) Binary blobs, they delay projects and cause projects to cost more as FAE and more engineers must be involved in solving problems. Blobs are here to stay mostly due to legal reasons (patents). Binary Blob are usually OS independent, e.g. the same binary is used in Windows and Linux, […]

There has been a lot of controversy around GPU drivers and open source, as GPU drivers usually come with a blob (a binary file). If you have been lurking in Raspberry Pi forums you’ll know what I mean. But this will change thanks to Lima. No, not the capital of Peru but the open source graphics driver for ARM Mali GPUs (Mali-200 and Mali-400) also called Lima whose goal is stated as follows: The aim of this driver is to finally bring all the advantages of open source software to ARM SoC graphics drivers. Currently, the sole availability of binary drivers is increasing development and maintenance overhead, while also reducing portability, compatibility and limiting choice. Anyone who has dealt with GPU support on ARM, be it for a Linux with a GNU stack, or for an Android, knows the pain of dealing with these binaries. Lima is going to solve […]