Some benchmark results comparing Nvidia Tegra K1 reference tablet to Intel based laptops show the latest ARM SoC matches and even outperforms many Intel devices, at least when it comes to 3D performance thanks to the 192-core Kepler GPU found in Tegra K1. 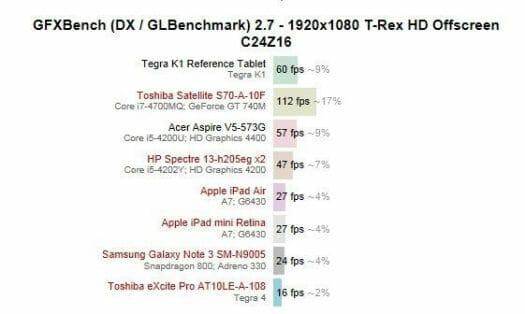 In T-Rex HD Offscreen test in GFXBench 2.7.5, Tegra K1 is hown to be about 4 times faster than Tegra 4, over twice as fast as Qualcomm Snapdragon 800, and interestingly it outperforms some Intel laptop such as Acer Aspire V5-573G powered by an Intel Core i5 4200U processor with HD Graphics 4200 GPU. It’s still twice as slow as a machine with an Intel Core i7-4000MQ and Geforce GT 740M. CPU performance will probably be equivalent to some Intel Core i3 machine however, at least for the quad core ARM Cortex 15 version, but that still probably means it’s very likely we’ll find computers and laptops based on Tegra K1, especially if it’s supported by Windows 8.x or the upcoming Windows 9, or if it finds its way into Chromebooks.

Unless we see these in a good amount of devices and possibly even mini pc’s its going to be incredibly expensive. Other vendors seem to be offering similar performing GPU’s theoretically, such as the mali t760 at its highest core config as well as powervr’s latest news of 300+gflop gpu. Sure nvidia beat them to promo it physically but can they beat them to putting them on the market and if so at what price and in what package.

Until there is some ACPI (or standard ROM-based device-tree mandatory in all devices), there will still be less flexibility and durability of ARM devices compared to x86 since the Linux kernel is specific to each board, since (when it is available) it’s often located on temporary storage services such as mediafire/rapidshare/… and not available 2 years later (and anyway the manpower to maintain it 2 years later has vanished since most people have switched to a more recent machine). ARM really means disposable machines… 🙁
As a comparison, my 10-15 years old x86 machines are still fully functional with Debian/LXDE.

@ade
You’re absolutely correct about this but there is something even today. Allwinner has their fex config file system which is very similar to a device tree. I have a tablet with Allwinner A10 and I can just use a generic Allwinner A10 kernel which is pretty OK.
I’m hoping Android will switch to a newer kernel that uses device trees for ARM but I’m not sure when that will happen. I’m not even sure a device tree for ARM covers all the settings already.

Now this is really impressive especially given that the Core I5-4200U is a newer part, released in Q3, 2013. Still it’s got a 15W TDP and Intel never really had great embedded GPUs, they allocate more die space and resources to the CPU.
I’m really curious how the new “Denver” nVidia cores will do against a Core I3 CPU or even a Core I5 CPU.

@ade
Linaro is doing some work on ACPI for ARM. I think, they partially have it working on Arndale (5250) board. It goes for ACPI first and later gets the missing pieces from DTS.

> Until there is some ACPI Who’s going to pay for that? There was no ACPI b/s on ARM boards because it costs more to have it. There will be ACPI on server ARM machines – if you have server rack and want to spend money on ACPI. > Linux kernel is specific to each board, since (when it is available) it’s often located on temporary storage services such as mediafire/rapidshare/ Nonsense. Linux kernel is located strictly here: kernel.org . Whatever located on mediafires is no Linux, just some random hacks. x86 and all its acpi’s work so well because… Read more »

Other benchmarks show a big drop in perf when actually pushing pixels on screen. People mentioned bandwidth bottlenecks in Tegra SoC … that would be sad. Anyone can confirm ?

The frame rate drops by two third (48 to 16 fps) between 4K (onscreen) and 1080p (offscreen) on the Tegra K1, and I’m not exactly sure if this is to be expected, or if it’s due to bandwidth limits.

@Jean-Luc Aufranc (CNXSoft) Well if you consider the fact the 4K needs 4x times ( I hope my math is right ) the number of pixels to be rendered I think it’s pretty much to be expected. Of course it’s probably due to bandwidth reasons too, consider the fact that modern high power GPUs really have GDDR5 at very high clock speeds and a 256bit or wider bus. This one probable doesn’t such a high performance RAM subsystem. It’s not even actually designed to run at such a high resolution even though it supports it. If you think about it… Read more »

@Paul You pretty much misundersood most of my point > Who’s going to pay for that? There was no ACPI b/s on ARM boards because it costs more to have it. I’m not advocating for ACPI, but at least for some standard ROM (at a standard address) that all boards would have to host the device-tree, so that the binary ARM kernel can be truly generic. > Nonsense. Linux kernel is located strictly here: kernel.org . Whatever located on mediafires is no Linux, just some random hacks Nope, this does not include the proper board files (and/or device-trees). Try to… Read more »

@ade
I couldn’t agree with this more. I think that is the problem with ARM nowadays, it’s like the wild west and it doesn’t have to be. There’s really no good technical reason why we can’t have an ARM kernel just like we have an X86 one.