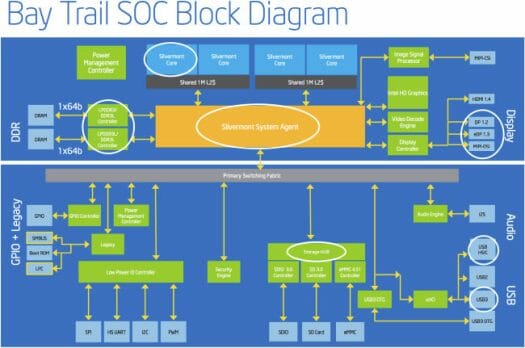 Jesse Barnes, working at Intel on software and drivers for Intel graphics devices, gives a presentation about Bay Trail SoCs with a focus on graphics. After an overview, and some ARM bashing regarding performance (Nvidia Tegra 4 and Qualcomm Snapdragon 800), and even power consumption (Tegra 4 only), he describe further details about Intel HD graphics found in the new Intel processors. Everything is basically in mainline, and you’ll need Linux 3.10 or greater, Mesa 9.2 or greater, and libva 1.2.1 or greater for proper support. Some initial GPU benchmarks showed somewhat disappointing results, but in this talk, Jesse explains some parts of the drivers still need performance improvements, as they only run at half the expected speed. VP8 support (hardware decode?) is work in progress in VP8.

Presentation slides are not available.