The Weightless Special Interest Group (SIG) has recently announced the world’s first transceiver chip using the Weightless Specification and operating over white space spectrum. Neul Iceni chipset makes use of the entire TV white space spectrum to provide low power connectivity for M2M and IoT applications using the Weightless Standard. Weightless Standard Overview Since this is the first time I write about the Weightless standard, let’s see what it is and what will be used for. There has been a lot of talk about the Internet of Things (IoT) and machine to machine communication (M2M), but one of the limiting factor is currently the cost of technology (and networks?) to provide communication. That is where “white space” spectrum comes into play. A large spectrum was used by analog TV channels, and since many countries have now switched to digital TV, part of this spectrum is unallocated (hence the name “white […] 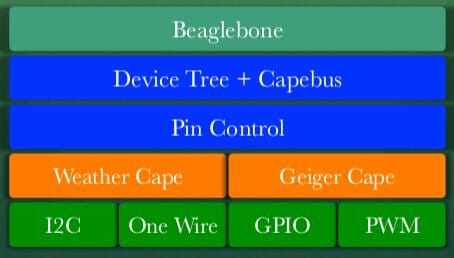 Matt Ranostay, technical staff at Ranostay Industries, gives a presentation about a telemetry system based on Beaglebone at the Embedded Linux Conference Europe on November 5, 2012. Abstract: The author will discuss his ongoing and other team members efforts to develop hardware and software that reports sensor data to the community. This talk will be split into several parts a) types of useful sensors b) hardware design of Beaglebone capes c) and telemetry reports to Pachube/Cosm. Demonstrating that in the new world of cheap prototyping boards with I2C, GPIO, and SPI that anyone can setup a decent monitoring system for home security, automation, and weather reporting. There will be a live demo of prototype geiger counter + weather station. The audience targeted is the professional hobbyist who likes to hack on microcontrollers in their spare time. It will take little to medium knowledge of electrical engineering to follow this talk. […] 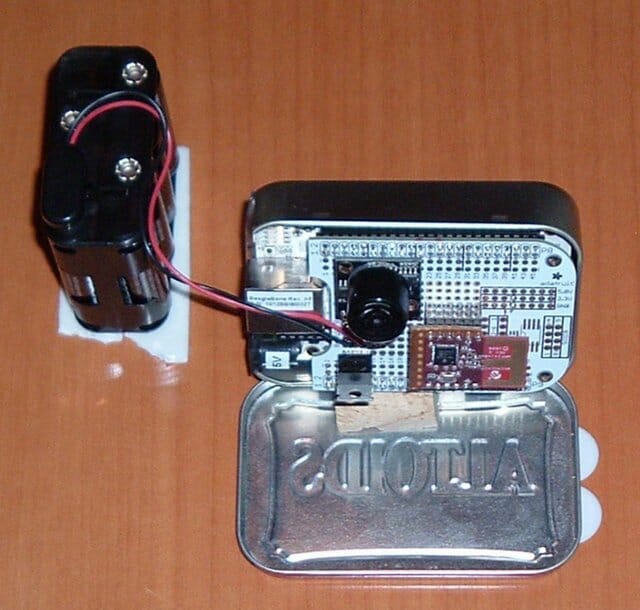 Alan Ott, founder of Signal 11 Software, gives a presentation dealing with wireless networking for the internet of things in Linux, especially with 802.15.4 and 6LoWPAN standards at the Embedded Linux Conference in Barcelona, Spain on November 5, 2012. Abstract: With the rise of the internet of things, low-power wireless devices will become increasingly prevalent. IEEE 802.15.4 is a wireless networking protocol designed for low-power and low-data-rate devices, such as those used in wireless sensor networks. While some higher layer protocols based on 802.15.4 are proprietary, an open standard called 6LoWPAN enables IPv6 traffic over 802.15.4. This presentation will give overviews of 802.15.4, its status in the Linux kernel, hardware support, comparison with other wireless protocols, and a demonstration of a simple 802.15.4/6loWPAN network. This presentation is targeted toward developers who wish to create low-power, low-data-rate wireless networks for sensors or other applications. Attendees can expect to gain a basic […] 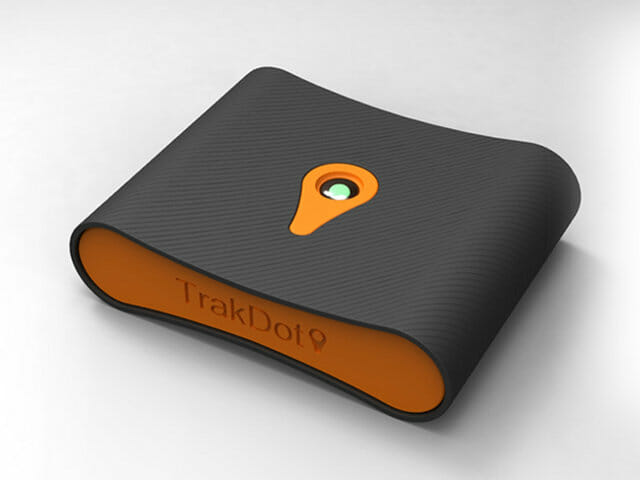 The Trakdot Luggage tracker is a small device that fits into a bag and reports city location in real time via email to any smartphone, or via SMS to any standard phone.  As long as a your luggage and phone are within mobile networks range, you can track your checked-in luggage anywhere. In case your luggage does not reach its destination (SITA reports 26 million bags are lost every year worldwide), you’ll still know the (approximate) location of your bag via GPS, and should be able to get it back. Once the device is registered on Trakdot.com, and placed inside a checked bag, it will deliver location information directly to the user’s mobile phone or SMS device via text or email.  It’s also possible to directly check the position on the website, or via Trakdot Luggage app. There will also be a separate app that can alert passengers as their […] 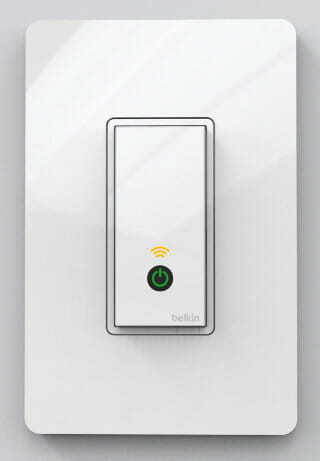 Wemo Wi-Fi-based home automation solution was announced at CES 2012 last year, and included products such as a control switch and a motion control switch, that can detect your presence and only turn on/off the lights or other electrical equipment when needed. At the time however, the only supported platform was iOS. At CES 2013, Belkin has announced a new product with the WeMo Light Switch, an Wi-Fi connected light switch to remotely control wired household lighting from anywhere, and support for Android. The WeMo Light Switch can replace an existing light switch and connects into your home’s existing electrical wiring. Once in place, you can turn a full bank of lights on and off from anywhere, put them on a schedule, or use other WeMo or online triggers to control them through a smartphone or tablet. The WeMo Light Switch is controlled via the same WeMo app as the […]

“Le Labo Citoyen” is a recently founded French non-profit organization aimed at “promoting and experimenting with innovating and free technologies for the citizens and the environment”.  Their first project is to gather pollution data (NO2, O3, and SO2 levels) in Paris using 2 (soon to be) open source components: Gasser – Self-contained mobile sensor currently powered by the Raspberry Pi ThingStream – Open source IoT datastore which should be similar to iDigi Cloud, except you can just store data in your own server or on “Le Labo Citoyen” servers. Gasser has four main parts: Sensor(s) – Alphasense B4-series sensors (black and red component in the top left of the  main box) with accuracy of up to <10 ppb (parts-per-billion). Cost: ~110 Euros. They currently only use the NO2 (nitrogen dioxide) sensor. ADC & Computer – Raspberry Pi (Cost: ~30 Euros) & Delta-Sigma ADC (Cost: ~30 Euros). Communication Medium – Huawei […] 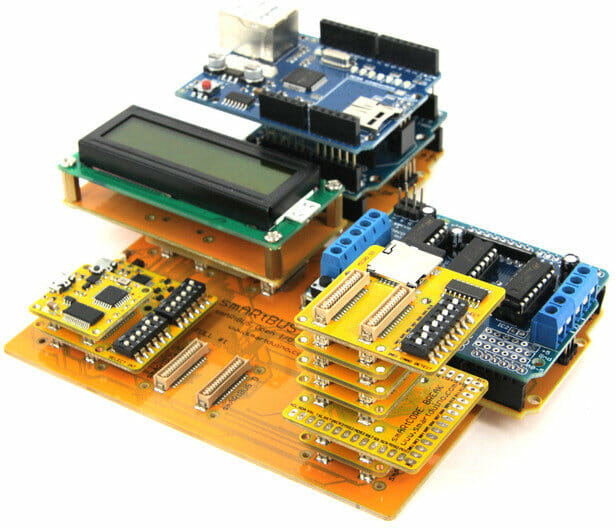 smARtDUINO is a new platform design by the former ARDUINO’s manufacturer (Update: This claim appears to be incorrect and a lie) composed of several compact modules and is a fully funded project on Kickstarter (Less than 3 days remain to become a sponsor). The platform is not based on a single processor, architecture or language but, makes use of an universal platform that can be used to connect components originally developed from different companies, technologies and form factors. For example, it is possible to integrate modules, accessories or shields from Arduino, Netduino, ChipKit and even interact with smartphone using an ADK module, without having to use a breadboard and/or soldering. Interoperability is made possible thanks to what they call “smARtBUS Open I/O“, which is a standard for connectors designed after looking at existing (Arduino) platforms on the market. The company opted for 2 solutions composed of 2 connectors: smARtBUS BASIC […] 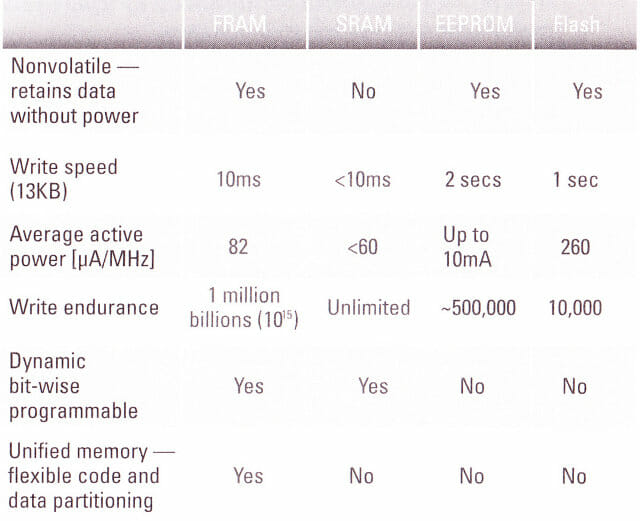 I’ve recently received a complementary book entitled “Texas Instruments FRAM MCUs for DUMMIES” sent by Mouser, that provides technical and practical information about FRAM (Ferroelectric Random Access Memory) – pronounced F-RAM – and Texas Instruments MSP430FR57xx MCU series which makes use of this relatively new type of memory. FRAM is a non-volatile memory with power and write speed & endurance characteristics that almost matches SRAM capabilities, and leave traditional Flash and EEPROM memory in the dust in terms of performance, as you can see from the table and diagram below. At constant speed, FRAM consumes 250x less than Flash/EEPROM. Please note the FRAM write speed also depends on the MCU used, and a MCU @ 8MHz can write the FRAM @ 1400 kBps (Source: TI). However, you won’t see this type of memory in devices like smartphones anytime soon because the maximum size currently manufactured is 1MB, density is higher […]