Jupiter Nano looks like one of those small MCU boards, but instead of a microcontroller, it packs a 500 MHz Microchip SAMA5 Cortex-A5 processor with 128MB RAM capable of running Linux or NuttX operating systems.

The board reminds me of the Adafruit Feather compatible Giant Board made by Groboards, with the same system-in-package, but Juniper Nano offers more I/Os via 48 through holes, and its size is said to be similar to Teensy 4.1 board (but not quite). 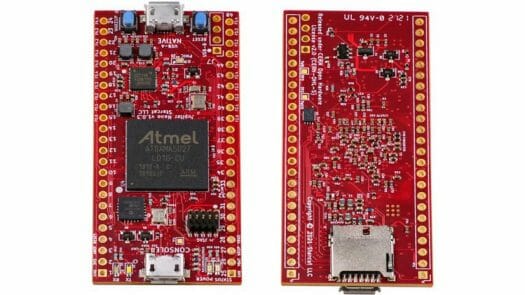 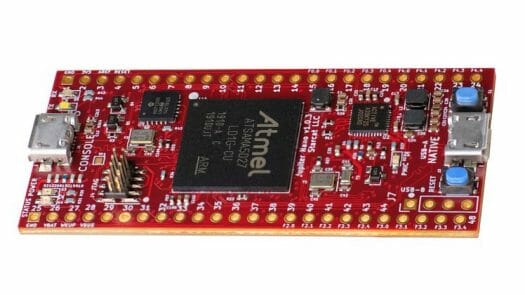 The board was designed with KiCAD and runs NuttX RTOS or Linux. It will be open-source hardware with KiCAD files, schematics, project files, and software source code released after funding is completed [Update August 7, 2021: The KiCAD files and software tools have been released on Github]. Compared to Arduino Due, the processor is 10 times more powerful and comes with 1280 times more RAM.

Jupiter Nano board has just launched on Crowd Supply, as part of the “Microchip Get Launched” design program, with the price starting at $65 for the early bird special for the first 50 pieces, and going up to $79 after that. Shipping is free to the US, adds $10 to the rest of the world, and deliveries expected to start in December 2021.

Updated: First published on July 5th, 2021, the post was updated on July 31th, 2021 following the launch on Kickstarter”.

For someone with professional needs (not hobbyist), this offers a significant advantage versus Pi0.

One of the most important features for professional use is the ability to execute code with on-the-fly encryption/decryption. This prevents third parties from copying or tampering with your software.

Rpi 0 provides venerable community support and long term commitment to mainline Linux development with open source drivers. They’re also pro trans, consider E. Anholt. There are many unfortunate all”winner” boards with simply no support at all. For instance Sinovoip is a pirate maker board company which produces new boards with new SoC and no support at all. Uptons kind of guarantee long term commitment to quality products whenever they launch anything new.

I tried finding temperature range info for rpi, no luck. So wondering how someone can consider it for industrial use outside of the airconditionned operator’s dungeon 😉

For e.g. the compute module it’s right there in the datasheet under the Thermal section.

How this would be different that his board:
https://www.cnx-software.com/2019/01/14/tiny-giant-board-linux-adafruit-feather/
I would say it also gives indication on the future cost.

The $79 price is ridiculously high: For $9 you can get a Lichee Pi Nano. For $19 you can get a Lichee Pi Zero. For 30€ you can get a PocketBeagle. For $15 you can get a quad core LibreComputer LaFrite with 512MB RAM, just slightly larger. Most Raspberry Pis cost < $79, even an RPi 4 with 4Gb RAM! And of course there are plenty of less powerful, but still very useful MCU boards around, at any price point from $1 to $50 depending on the peripherals. So I don’t see any use case for this particular board, at… Read more »

My thoughts exactly. Far too expensive

I thought the S805X was end of life ? At least that’s what a Hardkernel forum post suggests.

I think the price is a bit high but if say RTC only deep sleep works on this that would be a major step up for a lot of applications where you might otherwise consider the pocketbeagle (RTC sleep doesn’t work on the pocketbeagle because the rtc clock input isn’t broken out IIRC). Not everything is about having a ton of fast cores.

Most linux distros are unfit for something this small, unless you are running nanolinux or something. But the new kernels with le9 should help, but until they are out we dont really know. But those kernels claim 2 gb compared with 128 mb its not really a comparison. Agree $79 is stiff, but then again chip shortages have real potential to make sbc life uncomfortable. I havent a clue of nuttx