Overscan is an extra image area around the four edges of a video that may not be seen reliably due to manufacturing limitations of monitors. 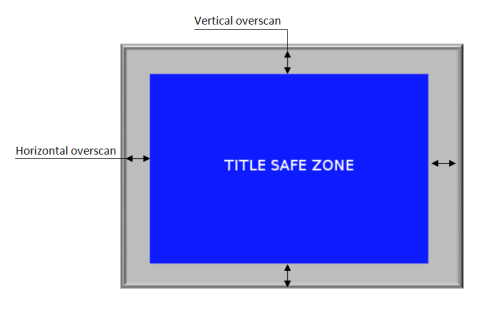 So that as you can see on the figure above, there is a title safe zone, where everything would be seen in any monitors (Blue Zone) and the gray zone where parts may be seen in some monitors but not others.

This mainly depends on the video output used. You won’t have problem with VGA or LVDS monitors,  since the former are able to underscan (to compensate for overscan) automatically, and the latter are generally configured manually.

However, with HDMI monitors (unless those which can support underscan) or monitors using composite or component outputs,  you’ll have to handle overscan problem.

This is the easiest part, since you won’t have to  implement any software to handle that case, but you’ll just need to make sure your user interface is title safe so that the icons and strings are not cut in some monitors.

You could just plan for the worst case scenario with 10% horizontal and 5% vertical overscan, so that if your graphical user interface resolution is 1024×768, your title safe zone would be 820×692, with the top left coordinates at 102,76 and you just have to make sure all icons and strings are displayed within this zone.

For digital signage applications this is more tricky since you may have multiple zones and text or pictures at the edge of the screen, and if there is  overscan your text or pictures may be truncated. Video would also be truncated but this is usually less of a problem.

For VGA and LVDS outputs (and for some HDMI monitors) you won’t have to do some special handling since those monitors can underscan.

However for other HDMI monitors and monitors that uses composite and component inputs, you’ll have to compensate for overscan in your application. This is however impossible to adjust this automatically, so the user will have to input the overscan values in some ways.

One way is to ask the user to input the overscan values manually in the control software that comes with the player or directly with the graphical configuration interface of the player (if any). However, that method may require the user to do some trial and error for each monitor in order to find the right values.

So the best way is probably to perform screen calibration where you output an overscan test pattern  such as that one:

You may also find other resolutions of overscan test patterns at TigerDave.com