The Raspberry Pi board will support the following Graphics and Video API via a set of closed source libraries that give access to the GPU acceleration features:

You can see Raspberry Pi hardware-accelerated “Multimedia” software architecture in the diagram below. It also shows which part is open source and which one is closed source. 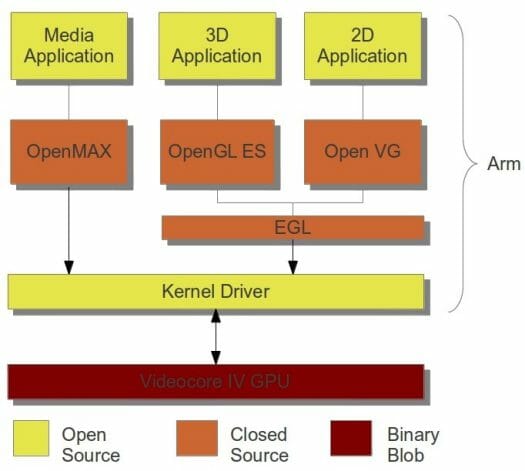 However, since Raspberry Pi board model B must not exceed 35 USD, and licensed codecs can be expensive, the Raspberry Pi will only support the following (licensed) codecs:

That’s it. I suppose MPEG4 means DivX and Xvid codec will be supported as they are simply MPEG4 implementations.

License free codecs such as VP8, MJPG and Theora may be supported, but the Raspberry Pi Foundation did confirm it.

I’ve asked them if users could purchase codec licenses separately (as It is (was?) done with Archos tablets), they  said they could consider it by it is time consuming and may not be of much benefit to the Foundation.