Leo, a reader of this blog who seems to be indirectly involved in togetho.ru, has written a review for UG802 dual core mini PC in Russian. He has allowed me to post the review in English,  and I wrote condensed review in English which you can read below.

UGoos UG802 is sent in the following package that clearly shows it’s based on Rockchip RK3066 processor. 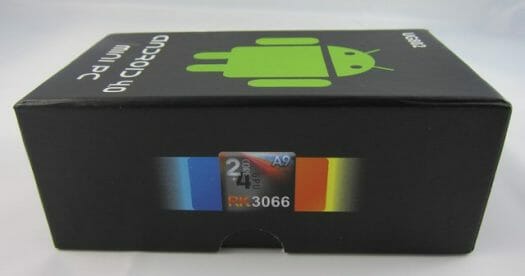 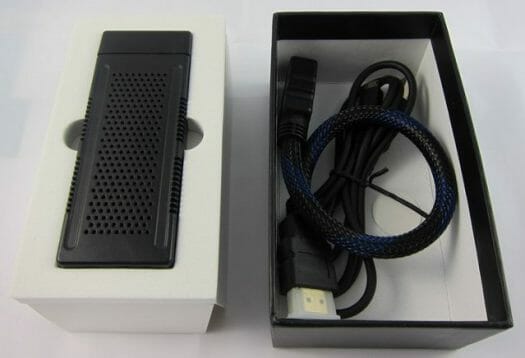 There’s the UG802 TV stick, a female to male HDMI cable (which appears to be too short as usual) and a USB cable to power the device. 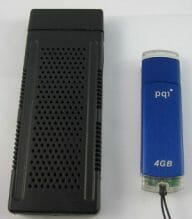 UG802 is not the smallest mini-PC around as you can see from the picture on the right where it is compared to a flash drive, but it weights just 31g, has a lot of ventilation holes, and features an HDMI male connector, a microSD card slot, microUSB and USB ports.

Leo connected a powered USB hub, and could use external HDD-drives, flash-drives, USB keyboard and mouse without issue, except there may be some delay when you type on the keyboard. But for this type of device, keyboard and mouse are not convenient, and recommends devices such as the Mele F10 or iPazzport wireless keyboard/mouse.

Once you’ve connected the device to HDMI and USB, the device shows an animated boot logo (R-BOX) and after a few more seconds you should see the following Android home screen. 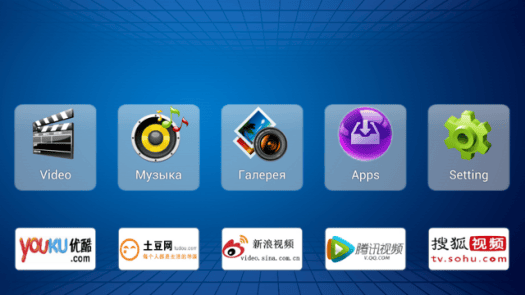 So they did not use the standard Android home screen, which IMHO is an advantage for this type of device, as bigger icons are more convenient to use on the TV. The user interface is typical of set-top boxes with a video, music and pictures sections, as well as app and settings sections, and there are 5 famous Chinese services which are available at the bottom of the screen, but might not be useful to most people.

Leo tried several applications including Skype with a USB webcam, mini (or mobile) Opera, Angry Birds, playing a Youtube video in the web browser and everything seems to be working nice and smooth as you can see in the video below.

During the first day of us, Leo experience quite a few Wi-Fi disconnections, and the only solution was to reboot the mini-PC, but after a few days of use, the problem seemed to have disappeared. Bluetooth is available in the menu, but UG802 does not have built-in Bluetooth, and USB Bluetooth does not work either, but the latter should be fixable in future firmware upgrades.

Several 1080p videos (MP4) on a USB hard drive could be played smoothly. Watch the video below to see the video tested in UG802. 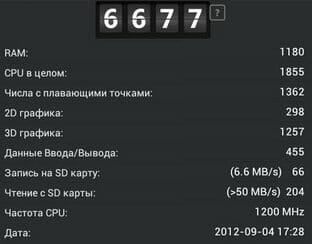 Leo ran several benchmark including Antutu which at 6677, is not as good as Rockchip RK3066 tablets (up to 8000) for the simple reason the CPU frequency is limited to 1.2 GHz vs 1.6 GHz for tablets, most probably to prevent overheating or limit the power required in order to be able to use the TV USB port to power the device without having to use an external power supply. Other benchmarks include CF Bench with a performance (6547) similar to Galaxy S2, Nenamark 2.0 (57.1 fps), Abtutu 3D Ratings (1280×672: 3910 | offscreen: 2949) and Vellamo (1469). As with most mini PCs, Quadrant simply refused to start (Black screen).

Finally, UG802 casing was opened to allow a closer look at the PCB.

In conclusion, Ugoos UG802 mini PC review was positive, as it is a lightweight and compact system that can be plugged directly into a TV to make it “smart”, it can achieve very good performance compared to existing solutions and does not overheat. However, the firmware is still unstable and there is room for improvement on the software side. You can find more information, and a lot more pictures in the review in Russian.

any chance of this getting linux support in the future?

Devlon Macormister :
any chance of this getting linux support in the future?

Unlikely since rockchip are unwilling to open the source

Hello, can anybody tell me if this is compatible with 1366×768 resolution TV (or 1280×720 – 720p)? In the specs it is mentioned that the output is 1080p, no mention of other resolutions. Does it have some kind of resolution setting or at least auto resolution?

Any chance this getting Jellybean? The browser performance is worth taking note of in Jellybean.

I think there is a very good chance of the ug802 getting jellybean in the near future.
It’s already out for several rk3066 based tablets.

Now that google android in persona nongrata what is your opinion of Aliyun OS? Looking for you to lead the way

I must have missed a very important piece of news…

what is your opinion of Aliyun OS? Looking for you to lead the way

I’ve seen it being discussed on arm-netbook, but I don’t think much can be done with it. It’s closed source and appears to rely on Alibaba cloud.

@BooLE
I want to share some photos that I got from sztomato. They claim they are rightful owner and manufacturer od MK-808, and that GV-20 is their MK-808.

Photos show that CPU is running at 1.3 Ghz, and Android 4.1. It is also showing package that it comes in. I uploaded pics to imageshack.

thank you for the direction on aliyun.

unfortunately, i can’t bring myself to inform you of the heinous act committed against the most holy Linux institution by google-android in association with its underpinning terrorist arm. in fact i am still having great difficulty coming to terms with the repercussions of these most unsavory of deeds myself. sorry, someone else will have to inform you there. suffice to say the holy grail has been unceremoniously urinated upon, and google-android was holding the offending organ.

@BooLE
I’ve also been talking with Tomato about the Mk808. Still trying to get pricing from them.
It’s a little worrying that the antutu score is so much lower than the ug802.
Anyhow I am picking up at least one of the mk808 to test.

@deadhp1
if you want, I can send you the pricing I’ve got from them. Currently it is OK, but the shipping costs are pretty high for me. I would order 2 pcs of mk808 and fly mouse keyboards, but I am also worried about the antutu score.

hi were i can start reading to be able to embedded a linux OS on this device?

Are there some alternative ways (botbrew, Ubuntu On Android) to run linux on UG802/MK808?

I received my ug802 today from in4dealz, wifi seems ok and also in antutu benchmark cpu shows 1608 mhz but the score is 6280

I love my UG802! Bought it for less than $50 on Ebay. I purchased it , more specifically, to stream Netflix to my 32″ HDTV in my bedroom. I had been streaming Netflix to my 55″ in my livingroom from my Wii, but wanted something for my bedroom as well. At first, I noticed that Netflix was streaming poorly even though the UG802’s WiFi was reporting 54mb connection speed. The video wasn’t choopy just horribly pixelated. I assumed that the WiFi stream was most likely the issue as it would drop a bar every now and then. I also knew,… Read more »