Remote Solution,  a small technology company based in South Korea, has shown off an Android 4.0 powered keyboard controlling an Android STB at CES 2013. The device is designed to be used as an advanced TV remote control, looks like a small tablet with 8 control button, and can be inserted into a full sized QWERTY keyboard for faster typing. 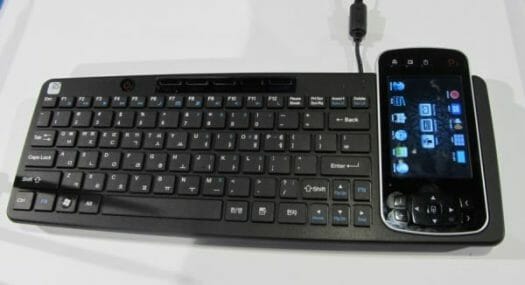 The specifications are as follows:

The touchscreen allows you to launch apps on your TV, move a cursor by using a virtual touch-pad, use an on-screen keyboard (when the screen is not connected to the keyboard), enter voice-commands via the built-in microphone, etc…

There’s currently no pricing or availability information availability. There’s no mention about this device in the company website, but this could be part of their TSR series.

They do have a website… but it doesn’t show this particular device yet.

I also got the country wrong. Writing too quickly, I accidentally identified Remote Solution as a company from Hong Kong, but they’re actually based in South Korea.

@Brad Linder
There seen to be a few “Remote Solution” companies around, and I also found some reference to one (maybe a branch) in Hong Kong: http://panjiva.com/Remote-Solution-Ltd-HK/1651125. Thanks. I’ll update the post.

@Jean-Luc Aufranc (CNXSoft) I got that link from the brochure they were handing out at CES, so this is definitely the one that’s related to this particular product. I don’t know why they don’t have this product on their sit yet, but the only reason I think I wrote they were from Hong Kong is because of the k in their domain name… I was reading too fast and missed the r. 🙂

I wonder about cost, it would be great as XBMC box remote.