Zealz GK802 is a mini PC based on Freescale i.MX6 Quad processor, with 1GB RAM, 8 to 16 GB internal memory (internal micro SD card). The main selling points of this HDMI dongle is that it’s the only currently available quad core processor (about to change), it’s hackable and unbrickable with easy access to the serial console, full support for Linux with hardware video decoding and 2D/3D acceleration (work in progress), and Freescale has released proper software and hardware development resources for the i.MX6 processor. As mentioned in my review of Hi802 mini PC, the downside is that Vivante GC2000 GPU performance is lower than the Mali-400 MP4 found in Rockchip RK3066 mini PC, and its price (usually above $90) is about double the price of Rockchip RK3066 mini PCs. 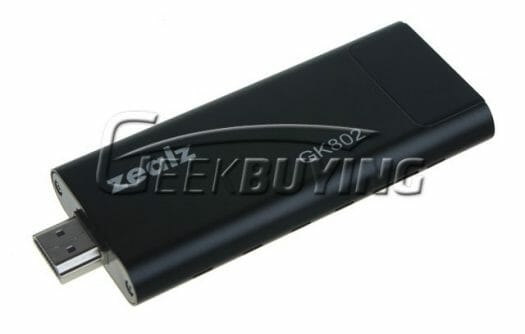 We can’t do anything for Vivante GC2000 performance, but Roman found a coupon code “FVKIWVAG” on a Russian forum that gives a $20 discount to purchase Zealz GK802 on Geekbuying, making the device costs just $69.99 including shipping. I have no idea is this coupon has limited quantities or is time limited, but it may worth giving it a try.

If you just plan to run Android, you may probably give it pass, and go with one of the upcoming RK3188 mini PCs that will cost about the same, but provide better performance. However if you’re interested in running Linux, Zealz GK802 is a unique device in mini PC world, as it’s the only low cost platform (<$100) that supports both hardware video decoding and 2D/3D GPU acceleration.

They should get Android 4.2 up and running. I bet those sticks will then sell like nothing before ;).

hmm There are also other smaller discounts:

Edit: Ahhh Google translate tells me this is a Group Buy…

GK802 price will probably drop like a stone once RK3188 mini PCs are out.

@Paul
Sorry for posting this as it almost made you buy it. I should have known better as the price was really too good to be true.