There seem to be more and more Android set-top boxes that can be fitted on top of the TV, but if you are mainly interested in video conference they may not always have very good cameras: MK818 comes with a 0.3MP camera and Archos TV Connect has a 1MP webcam according to Arctablet, which is good enough for 720p video conferencing. On the contrary, Veidoo HD2, an Android 4.0 set-top box powered by AllWinner A10, comes with a 5MP camera which should allow you, in theory, to do video conference in 1080p if your internet connection permits it. 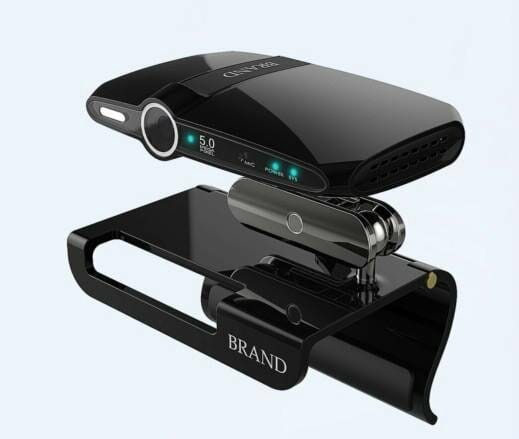 The package comes with the media player, a power adapter, a USB cable, an HDMI cable, a stand, an English user manual, and an OTG cable. The built-in microphone is the part of the specs, but since they claims you can talk within 3 meter of the device, it must be included. There remains to be seen if the 5MP claim is correct, as Chinese manufacturers or their resellers like to to fudge with the numbers.

You won’t get a fantastic Android performance with AllWinner A10, but for video conference, and video playback it should be more than enough. Although Linux should run on the device, don’t expect to use the webcam as the video decoding libraries provided by AllWinner are buggy, and nothing will be done to improve things.

I found the device on dx.com where it sells for $106.40, but it’s also available from Veidoo (the manufacturer) on Alibaba for $65 to $120 per piece depending on quantities. After further research, another name for the device is  EU2000, and it’s available on Aliexpress for around $90. An other option could be to buy a 5MP pixel webcam and connect it to the USB port of a low cost Android media player or mini PC.